I love bread with lumps in it! – me, blog from OUR kitchen | Muesli Rolls sans Chocolate (BBB June 2015) 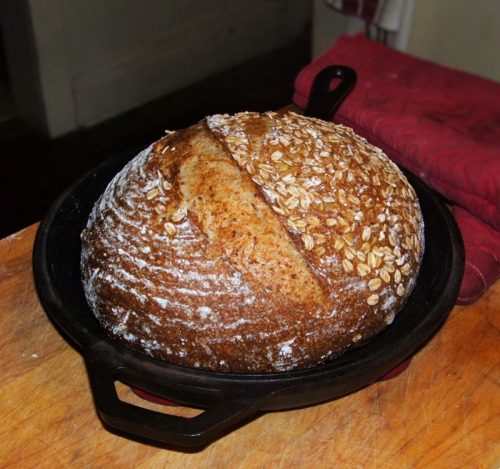 We have been happily making “sourdough” bread since July 2017. We did have a few earlier rough starts though….

Ever wonder how to bake sourdough, but don’t know where to begin? I’m going to tell you a secret: You don’t have to be a professional baker or have a concrete knowledge base to get started. Sourdough can be accessible to anyone. […] I used to think it was some kind of mad science project myself. But in actuality, it’s a technique that can be traced back thousands of years […] It is not necessarily “sour” dough. The flavor can be either mild or tangy, depending on how the starter is cared for and how the dough is made. You won’t find any hydrogenated oils, corn syrup, or preservatives lurking in homemade sourdough-it’s 100% natural.

But I confess that the bread we’re making is almost always based on Chad Robertson’s basic country loaf in his wonderful cookbook “Tartine Bread”. I used to make multi-grain bread all the time when we were only using commercial yeast. But now, with bread raised with our Jane Mason starter, we’ve almost forgotten what it is like to have lumps in our bread! END_OF_DOCUMENT_TOKEN_TO_BE_REPLACED