summary: Fourth try at making Wild Bread, based on a recipe in “All You Knead is Bread” by Jane Mason; adding the float test didn’t help; how to know when to shape; how we react under duress, continuing the search for not-sour sourdough but seriously contemplating conceding defeat;

This is the sad and sordid account of our 4th try at Jane Mason Sourdough bread that was supposed to be not-sour. Ha. 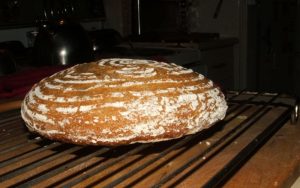 And we had such high hopes!

I suspect that anyone would find the bread that I made this time round to be quite sour. This morning’s toast was a little like biting into a lemon. Or a pickle. But not as pleasing as either of those.

Clearly, this recipe I’ve been using takes too long to make. 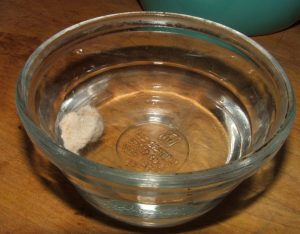 I mixed the bread dough and kneaded it… Wow, not nearly so sticky!

What’s really cool is that when I kneaded this dough, it wasn’t nearly as sticky as the other tries at Jane Mason sourdough have been. The other plus is that there is virtually no sour smell. It just smells like bread dough. (Can this really be working this time??)

I carefully stretched and folded as per Jane’s instructions.

The dough refused to really smooth out. And then when I went to shape it – phooeey!! – it burst apart.

I dumped the offensive thing into the brotform anyway, hoping that the fact that it didn’t smell sour would make up for the fact that the top wasn’t smooth.

Storm clouds over my head. Flashes and Crashes from me. It won’t do.

I’m seriously considering murdering the starter. I hate feeling like a failure! 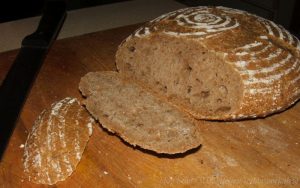 We sawed into it and tasted the horror in the early morning, thinking about the claim that sourdough toast is good.

Jane Mason is wrong. Even if the bread looks good, and is slathered with butter and honey, it’s not good. It’s just sour.

So. Back to the drawing board… I guess I’ll give it one more shot. After all, I’ve got the stupid sludge in the fridge.

But if we have one more sour loaf, I’m afraid I will be a repeat offender and be forced to commit Saccharomycicide once again.

What a shame that I didn’t read this earlier!

I have had a high volume of messages lately from people whose sourdough bread is not working out. […] I think what is going on is that they are using a starter that is not refreshed enough to ferment their dough. So, how do you know when your sourdough starter is ready?
It takes time, effort, patience (and a lot of toast) to get to where you want to get to with sourdough bread. […] [B]ubbles do not necessarily indicate that the sourdough starter ready to use. In order to determine that with total accuracy, that your refreshed starter is ready to use, do the water test: Put a spoonful of your refreshed starter in a glass of water. If your refreshed starter floats, it is ready to use.
If it sinks it is not ready OR you have left it too long and it’s gone past its peak. Either way, it will not ferment your dough and the result will be a rather flat, worthy loaf. Never forget, even if it’s ugly it’s good toasted.

– Jane Mason, Virtuous Bread | How do I know when my sourdough is ready for baking?
[I]t’s time to talk about how much refreshed sourdough starter you actually use. […]

– Jane Mason, Virtuous Bread | How do I use my refreshed sourdough?
When at its peak, the starter should be foamy and full of bubbles of different sizes. […] The smell should be sour but pleasant, reminding a mix of yoghurt and sauerkraut or pickles. […] [I]f you think the dough looks good, but aren’t quite sure, you can do a float test. Take some cool water (the exact temperature isn’t important, 25°C or so works fine) and pour a spoonful of your starter in the water. If the piece of starter floats, it is ready to be used. If it sinks, that’s a sign that there isn’t all that much gas in the starter, which makes it heavy — and means that not much fermentation has happened yet.

Bread baking is all about managing fermentation, and the starter and leaven are integral to this process. Leaven imbues both flavor and form to the final loaf. I have found that a “younger” leaven with very little acidity is ideal. Here, it lends a sweet, almost nutty undertone rather than the sour, vinegary notes often associated with sourdough breads. In order to manage wild yeasts and bacteria, you must maintain a consistent routine and “feed” your starter regularly, thereby “training” it to be active and predictable. Feed it once every 24 hours […] When the leaven is ready, it will float in water, [and] should smell sweet, in an overripe fruit sort of way. Ultimately, the leaven imparts a nuanced depth of flavor to the final loaf of bread and helps give it its springy form.

Interesting! When I took the vegetable scraps out to the composter about 8 hours after tossing the horribly sour cubes in, I was amazed to see that creature(s) had broken in and eaten it all! Who knew that possums/raccoons liked sour sour sour bread?