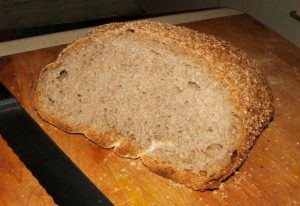 Early this summer, we were reading Michael Pollan’s book, Cooked: A Natural History of Transformation. And we were really intrigued by his 100% whole wheat bread making method.

The bran was still undermining the gluten, either by puncturing the gas bubbles or by weighing them down, giving me a too-tight crumb. I hit on a slightly wacky idea: I would remove the bran from the inside of the bread and put it on the outside, where it could do no damage to the gluten. So, before mixing my flour and water, I sifted the chunkiest bran out of the flour, maybe 10 percent of the total volume. In effect, I was making white (or whitish) flour circa 1850, pre-roller mill […] It still had the germ, but only those particles of bran small enough to slip through an ordinary sieve. However, I reserved the sifted bran in a bowl, and after shaping the loaves, I rolled them in the stuff, making sure that every last shard of bran was taken up by the wet skin of dough.

It worked: The trick allowed me to bake an airy and delicious loaf with a toasty, particulate crust-all the while preserving my claim to a “100 percent whole-grain” bread.

I had to be out of town at the beginning of July but T reported that he tried this method with 100% whole wheat. Which amazed me. This is the “can’t we have nice fluffy white bread?” king.

And the next amazing thing was that it worked!

So. Of course, I too had to try it. But I admit it; as good as the 100% whole wheat June BBB bread was, after making it, I was afraid to use ALL whole wheat flour. I really didn’t want to make a doorstop. It was bad enough that it was impossibly hot this summer.

So, when I got home, I tried the sifting method with bread made with a half and half mix of 1000gm all-purpose and wholewheat flours. It turns out that in 500gm of 100% whole wheat flour, there are only about 4gm of “larger bits of bran”.

The resulting loaves were beautiful! The arguably hyper-critical (of sandwich bread) T, pronounced that this bread was exactly what he wanted for sandwich bread. (Sorry, no photographic proof; we ate it all.)

Then it got impossibly hot in the kitchen. Bread making, other than focaccia on the barbecue, was shelved until night temperatures dropped below 20C.

Finally, sometime near the beginning of September, there was a break in the nightmare. But, still being nervous to use ALL whole wheat, I made the 75% whole wheat loaf recipe in Ken Forkish’s wonderful book “Flour Water Salt Yeast” (75% ww; 25%unbleached AP)

Whoohooooo!! Once again, it WASN’T a doorstop. It was wonderfully nutty tasting and quite light. Not at all like the whole wheat health food breads of yore. Yay.

And the really cool thing is that even when the bread was two or three days old, it was still very good. That’s what a long fermentation period does. 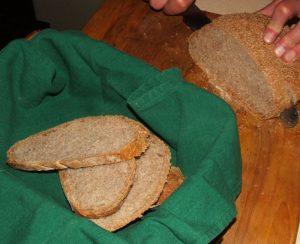 So. What do you think? Do I dare try making 100% whole wheat bread?

Total amounts to make 3 round loaves:

:: FLOURS: If you can, try to get unbleached all-purpose and whole-wheat flours with zero chemical additives. Here in Toronto, we can easily get Rogers flour at the supermarket (Freshco is now carrying very reasonably priced Rogers flour in 10kg bags.)

:: SIFTER: We don’t have an actual flour sifter (I know there was one in Mum’s kitchen but I don’t know where it is now…). Instead, we just use a sieve and a wooden spoon. It works beautifully. 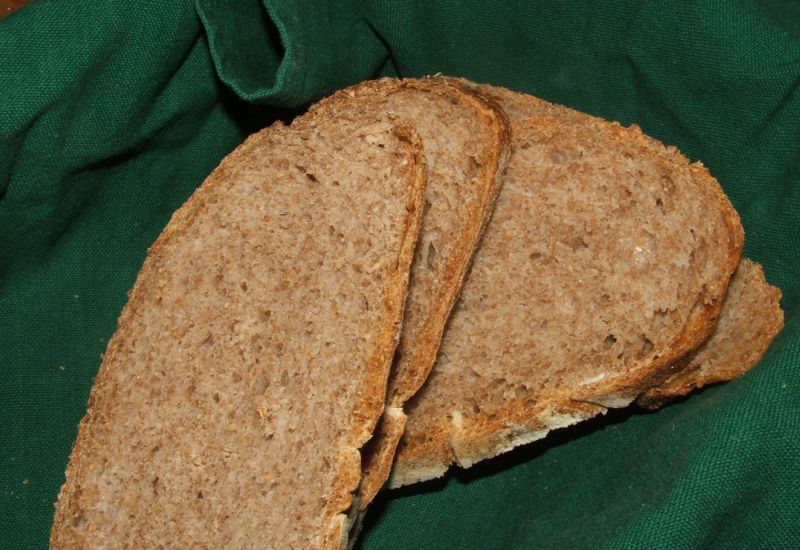