summary: in praise non-sour sourdough wild bread; planning ahead; working with Jane Mason levain; what to do with all that extra starter; it’s Sourdough September

Apparently, it’s Sourdough September in the UK. I learned about it from BREAD Magazine’s “Dough Wizards” newsletter.

But for us, I think that we will be still be celebrating Sourdough in October, November, December, January, February, etc. etc.

Of course, we do NOT call our bread Sourdough. Because it isn’t at all sour. We’re so thrilled about the bread that we want everyone to be able to taste it.

We cannot get over just how wonderful our wild bread is, ever since we embraced using Jane Mason’s starter and Chad Robertson’s mixing/kneading/shaping/baking method. 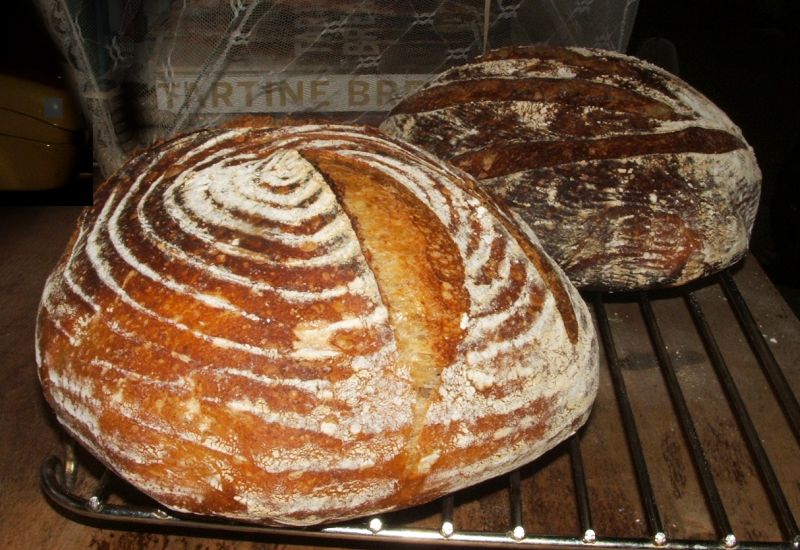 Last week, one of my sisters who lives on the west coast visited. We took the opportunity to invite ourselves to spend the weekend at our cousin’s house in Vineland. Everyone from our family who was in the vicinity descended on my cousin and cousin-in-law.

I was pretty happy with the bread we were going to bring. But it wasn’t without its trials and tribulations. Of course it wasn’t. It’s me who was making it.

My plan was to bake the bread on Friday morning. Because I really wanted to be sure that the levain would work, I started building it up on Tuesday, to mix the bread on Thursday. As a result, I had to feed it repeatedly because it was very very very active.

We now have TWO Mason jars of starter in the fridge….

Anyone need some starter?

At the appointed time, the bread baked beautifully. After breakfast, T set about making Rendang (with pork shoulder instead of beef) for Saturday’s dinner. Why Rendang? We were inspired by James Oseland’s article “Worth the Wait” in SAVEUR No.156, May 2013.

One of the most amazing things I’ve ever eaten was at a potluck lunch. I was all of 19, an American traveler on my first visit to Indonesia, and the dish proved life changing. It was beef rendang, a specialty of West Sumatra, an Indonesian province with a celebrated cuisine […] The glistening meat, fall-apart tender, was coated with a thick sauce of such complexity that I was at first taken aback—and, a moment later, smitten. In it, nutmeg, cloves, cinnamon, garlic, chiles, and a host of other ingredients harmonized. […] It [was] as dark as chocolate, gleaming, and intense.

(I cannot believe I haven’t raved here about Rendang! J’adore Rendang! Remind me. In the meantime, here is SAVEUR’s recipe for Rendang…. aside from substituting pork shoulder for the beef, we used almonds instead of candlenuts. We were also very excited to be able to use lemongrass from our garden!)

Armed with bread, Rendang, wine, plum pie, bicycles, and healthy appetites, we arrived in Vineland on Saturday, just in time for lunch that included one of the two loaves of Tartine bread we had brought with us. It was a beautiful sunny day – not too hot and not too cold – it was juuuust right.

After a fabulous lunch – P had made callaloo and crab soup that was spectacular (we finished off one of the loaves of Tartine bread), those of us (J, B, T and I) who had brought our bicycles headed out into the beautiful countryside to pedal off the pounds, while the others slaved away in the kitchen to prepare the rest of dinner (sweet potatoes, coconut rice, a beautiful layered green salad, etc. etc.).

We pedalled out on a circuitous route past fields of soy or grapevines and then down and up into little wooded areas throwing dappled shade onto the largely untravelled road. A hawk sat majestically on a wire above one of the vineyards, mocking the paper hawk kite sailing above one of the rows of vines to keep the marauders away.

We got back to the house just in time to do nothing at all to prepare for dinner (pretty clever, eh?). We sat in the garden for a few minutes to taste P’s beautiful avocado dip and then go for a stroll past the pond to catch a glimpse of the frogs, around by the neighbour’s soy field to visit two of the horses, continued on the perimeter past apple trees, picking our way through the unpicked apples that had fallen, and past fruit-laden high bush cranberries to the pony paddock to visit the new colt. 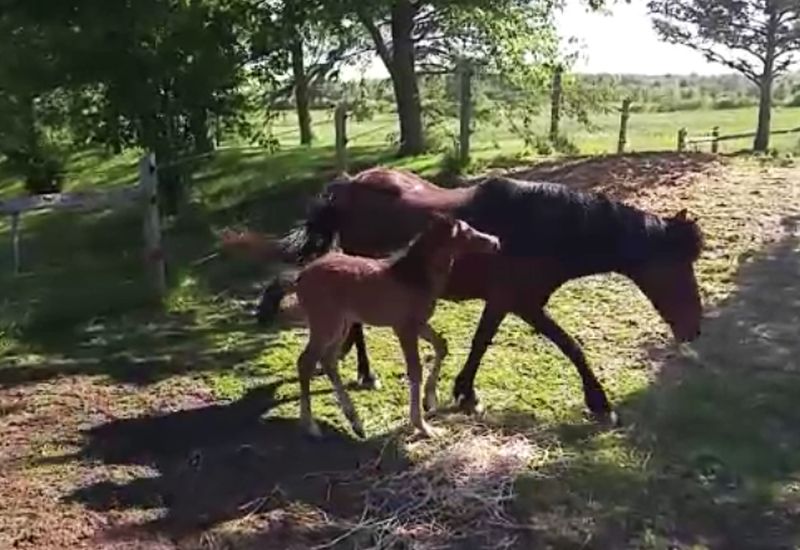 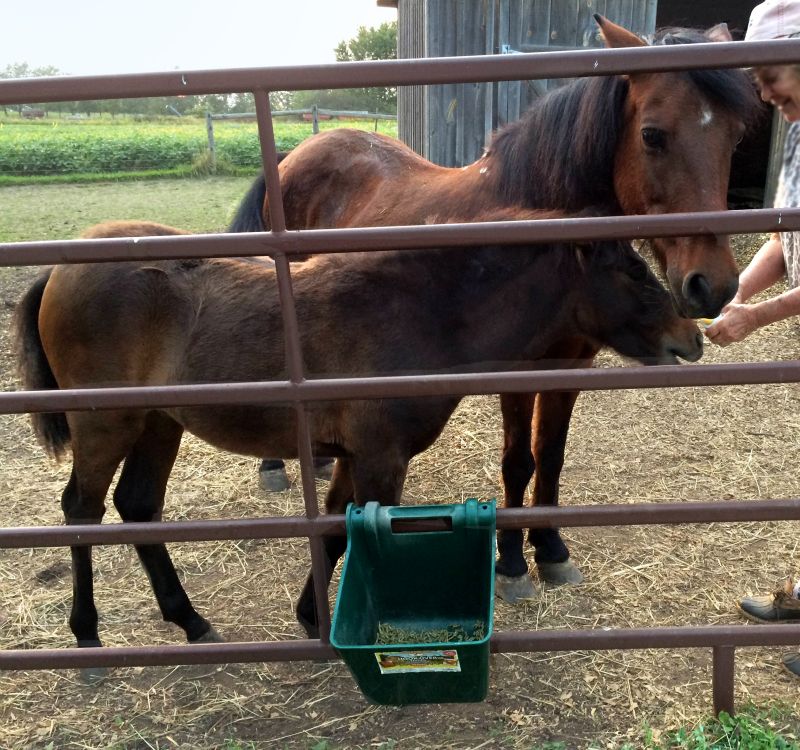 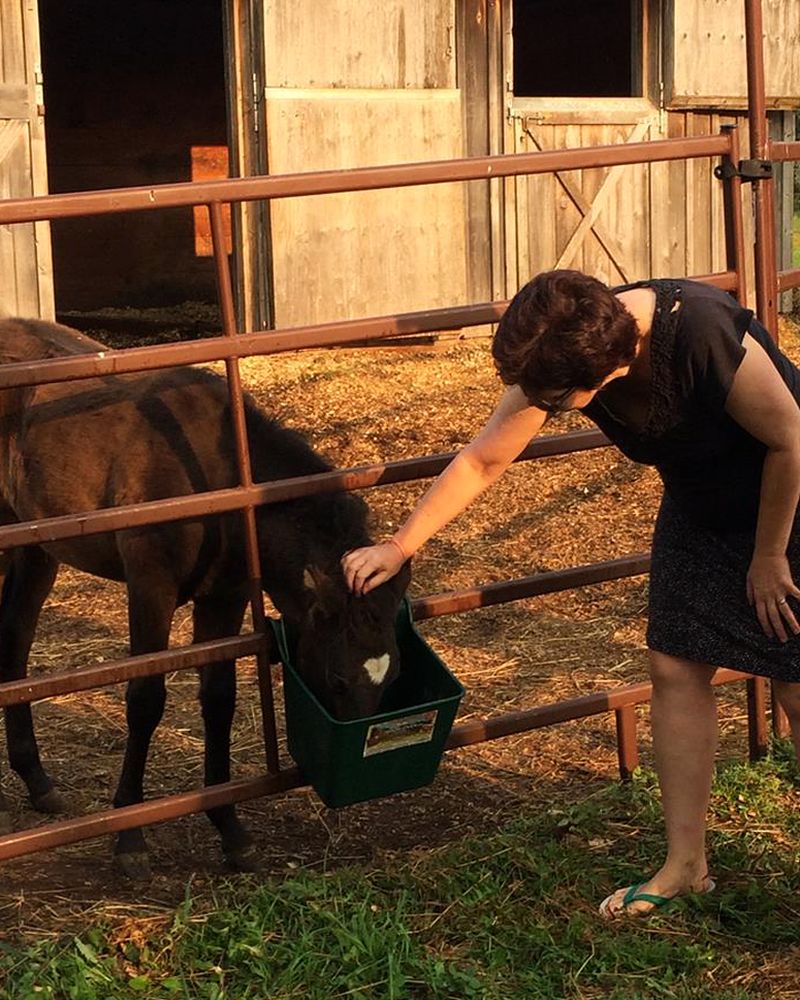 And then back we went to our evening feast – talking and laughing late into the night. We didn’t quite finish the bread; there was pie….

Because we were so many, T and I camped out by the soy field, listening to crickets galore. In the very early morning, while I was snoring, T heard coyotes in the distance. Then a little later, when T was snoring, I heard a rooster greeting the morning sun just peeking over the horizon. I looked out of the tent to see the field covered in dense mist.

But by the time I had made my way to the house, the mist had pretty much burned off. G and I took two colanders to pick dew-covered blackberries for us to take home. We WOULD have waited until later but alas, we had to leave Paradise to get back onto the road and home. 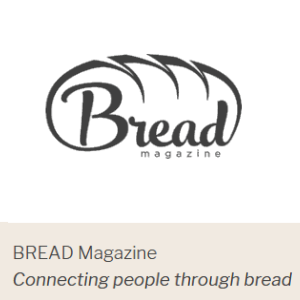 BREAD is an independent magazine for bread lovers, made by bread lovers. At the crossroads of home baking and professional artisanal baking, BREAD is an entertaining and inspiring journey that invites you to build meaning and deeper connections through bread. [H]ere are nine ideas to make your September full of sourdough, bread… and fun! 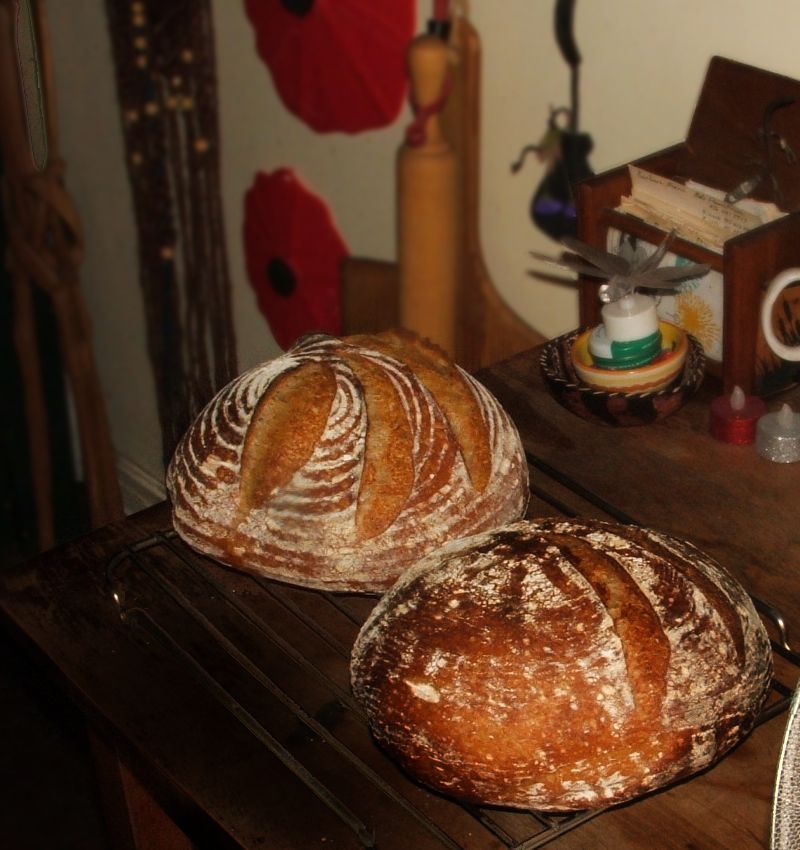 2 responses to “Bread for Cousins’ Day”