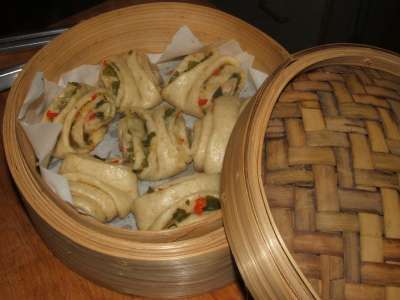 My promise to bake all the previous BBBabe breads continues to haunt me….

I have been thinking for quite a while that I really should try the steamed flower rolls. Every time we go to China Town, I see someone preparing stuffed rolls for steaming (I love that so many of the restaurants have people preparing food in front of those big picture windows facing onto the street!) and remember that we’ve GOT to try them.

And then when we got to the Flower Roll section in Mrs. Chiang’s Cookbook, I was even more resolved to get cracking. The two recipes are not unsimilar so I decided to almalgamate.

I got steamed up!! Finally…

I know. I’m only a couple of years late. I hope the BBBabes will forgive me (again) for my tardiness (and flagrant disregard of some of the instructions).

Monday 6 February, 16:13: Oh oh. I was so hoping that we would be having flower rolls with tonight’s dinner! I mixed and kneaded the dough around noon today, placed it in its mixing bowl (even though the instructions said to oil the rising bowl, I was once again disobedient and left the bowl untouched), covered it with a plate and put it to rise in the oven with only the light turned on.

I don’t THINK it’s because I didn’t follow the recipe exactly…. The only thing I didn’t add was the butter. Why? Because while I was putting together the BBB recipe, I noted that Mrs.Chiang doesn’t add butter to the dough but slathers the risen dough with lard instead. (I haven’t yet decided if I will do that or not. It all depends on how things go with the rising.)

The other change I made was to use lukewarm water rather than cold. The BBB recipe doesn’t appear to expect the dough to rise. But Mrs.Chiang’s recipe clearly states that it should rise to double. Not once, but twice. Oh dear…

In spite of the fact that something has gone awry and caused the dough to sit in a little lump refusing to rise, I will just pretend that everything will be fine and proceed with preparing the bamboo steamers.

I can’t even remember when we got our bamboo steamers. (Was it 10 years ago? 15? 20? :lalala:) They were a gift from my sister and I’m a bit horrified to confess that we’ve never used them. Luckily, there are instructions galore on the internet for what to do with brand new bamboo steamers. Isn’t the internet great?!

Before using for the first time, scrub the bamboo thoroughly with mild soap and water. While it is still wet, steam it for 30 minutes. […] [I]f you are making steamed bread, lightly grease the bamboo slats and then place the dough directly in the steamer. When finished, remember to take off the lid and let the steam disperse before reaching in for food. […] Another helpful hint is not to allow the food to come in contact with the steamer and you won’t have sticking, or rancidity. Use a bed of lettuce or other fresh leaves, or parchment paper.

19:02: After washing and steaming the steamers, I put them into the oven with the bowl holding the still small lump of dough and hoped that the steam would encourage a little action. I also put little plate with a blob of butter into the oven – to soften it so I could spread it.. I decided to use it instead of lard.

Lo and behold, the steam worked! When I went to make the flower rolls 15 minutes ago, the dough lump was larger. I proceeded with the next step.

Using a rolling pin, roll out each piece to a 25cm square. […] Brush the dough surface lightly with oil and sprinkle the chopped chives and chillies evenly over the dough. Season with salt. Fold the dough in half and then cut into 2.5cm strips so that you end up with 10 folded strips. Stretch each strip and, starting at the folding edge, twist the two pieces of each strip over each other to form a rope. Take the twisted rope and tie into a double knot, tucking the loose ends underneath.

Even though I read this section over and over and looked at the other BBBabes’ completed steamed buns, I just couldn’t wrap my mind around how to do this. I decided to follow Mrs.Chiang’s method instead. She says to roll out the dough into a large rectangle and sprinkle it with salt, slather with lard and scatter green onions overtop before rolling it up like a jelly roll. Her next instruction is to:

Then take a chopstick and press it down across the middle of each piece so the inside layers flare out, sort of like a fan.

My pea brain could manage this. It’s sort of like making cinnamon buns. Not to mention that I had watched a YouTube video showing exactly how to use the chopsticks. 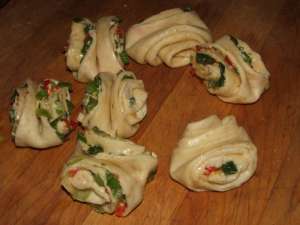 So that’s what I did. Except I slathered the beautifully smooth and elastic dough with soft butter instead of lard as Mrs. Chiang suggests. Then I drizzled a little smoked sesame oil overtop and used a pastry brush to spread it around evenly before scattering the chopped green onions and red chillies over-top. Turning each piece into fans was child’s play and they looked stunning. I turned a bowl upside down over them to keep them moist and left them to sit and maybe by a miracle rise. 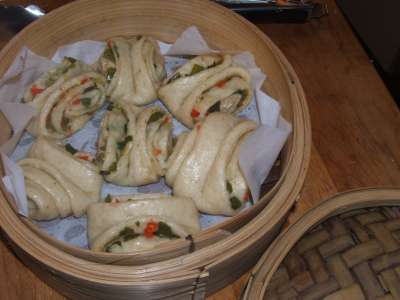 And they tasted pretty wonderful as well. I don’t know if they were correct or not. But we don’t care. They were a little chewy and really delicious!

We served them with pork and peanuts, stir-fried broccoli and rice. Dinner was, once again, wonderful.

Here is the BBB recipe and here is what I did to it:

Serve immediately. Mrs. Chiang suggests serving them with ham; we had them with pork and peanuts.

2. Water: Brettschneider calls for chilled water, placed in the refrigerator overnight but Mrs. Chiang calls for lukewarm water. Because our kitchen is so ridiculously cool in winter, I elected to use warm water. (Good thing I did; imagine how long it would have taken for the dough to rise if I’d used cold water!) Tap water is fine to use – just make sure that it has stood for at least 12 hours so that the chlorine has dissipated. Under no circumstances should you use water from the hot water tap. Heat the water in a kettle or microwave and add cold water until it is the correct temperature, (use the baby bottle test on the back of your wrist – your fingers have no idea of temperature!) Or you can use a thermometer. The temperature should be BELOW 120F because yeast begins to die when the temperature is higher than 120F.

3. Butter: The BBB recipe calls for 7.5gm butter to be put into the dough itself (I think). I elected to slather the butter onto the dough after rolling it out.

4. Sesame oil: Brettschneider calls for rice bran oil to brush onto the dough; Mrs. Chiang suggests slathering the dough with lard. Other flower roll recipes call for toasted sesame oil. We didn’t have any rice bran oil but we always have sesame oil on hand.

We each had two flower rolls and after the initial surprise that they were rather similar to firm pasta, we both decided we loved them. We think they’d be brilliant as part of a vegetarian dinner – they have such a lovely firm texture.

Mrs. Chiang says that flower rolls can be made in advance and reheated by steaming again for a few minutes. Alternatively:

Leftover huajuan are particularly good if they are fried in deep fat until they turn golden. Many restaurants in Taipei served them this way, and they were magnificent – crisp on the outside and soft on the inside. 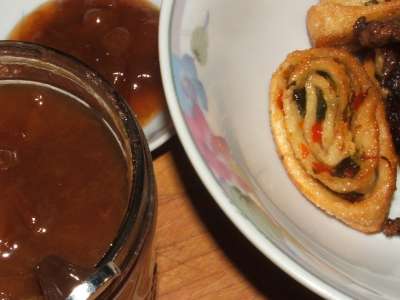 Well. We had to try this!! This morning, we cut the three leftover rolls in half and deep-fried them in vegetable oil in the wok. We served them hot and golden and crisp with tart plum jam from two summers ago. Not exactly plum sauce – better than plum sauce!

So brilliant that I’m going to make flower rolls again for tomorrow night.

Thank you BBBabes for this wonderful new (for us) bread! And a very belated many many thanks again to my sister for the bamboo steaming baskets that made this adventure entirely possible!

Karen (Bake My Day!) was the host of the September 2009’s Bread Baking Babes’ task. She wrote:

Dear readers, from this Kitchen of the Month we interrupt our regular programming to bring you this important announcement:

The Bread Baking Babes haven’t been baking this month.

You read that right, we’re not baking we’re steaming! (Obvious huh, we’re Babes!) So what’s keeping you, get out that steam pan, upend the plant to get to its bamboo container, relieve your son from his make-shift helmet (aka your colander) and steam along.

I confess that one of the reasons (the first reason was laziness) I didn’t make these earlier was that I was afraid they’d be disgusting and slimy. I was WRONG!! Not disgusting. Not slimy at all. They were firm but soft. And what a wonderful flavour!

And if you didn’t already see them, or if it has been a while since you looked, please take a look at the other BBBabes’ Chinese Flower Steamed Buns:

For complete details about the BBB, please read:

High 5! I did it!! I have now completed another part of my own private challenge to bake more of the BBBabe’s recipes.