Well. I’m only one day late. It’s not entirely my fault. (Actually, it is…

…one of these days I might learn to plan ahead.) If only the BBB dough had taken just 3 or 4 hours to rise – as per the recipe, I might have been on time. Still, better late than never for:

“Nearly eleven o’clock,” said Pooh happily. “You’re just in time for a little smackerel of something.” 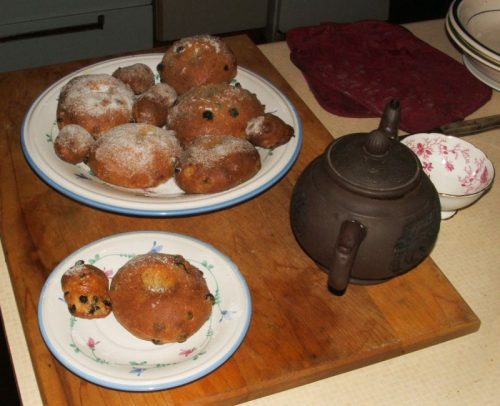 We are the fortunate ones; there are so many traditional yeasted delights to bake in December: Lucia Buns, Finnish cardamom bread, Brioche Flowers, Clark’s Bread, Stollen, Panettone, Babas au Rhum, . . . And then there are the non-yeasted delights too: scones, various kinds of shortbread, vinarterta, fruitcake, chocolate bark, cherry snowballs, crescents, cheese biscuits, . . . .

And now, thanks to Pat (aka Elle), we will have currant doughnuts – baked (Yay!), rather than deep-fried – to add to our feasts as well.

Here’s how things went with making these doughnuts:

1 November 2018, 11:54am I love currants in bread! I also really like the idea of doughnuts that AREN’T deep-fried. What an excellent choice for December!

Being the measuring freak I am, I have once again converted the volume measures to weights. (I also added the amount for the granulated sugar, as per the instructions.)

I’m afraid I had difficulty with the salt though (Ha! You know me. I’m really a freak about measuring salt!)

– me, blog from OUR kitchen | salt is salt, right?
2 teaspoons kosher salt

Scrolling down on Dad Cooks Dinner | Salt by Weight, there is a handy chart showing the various weights for different salt:

Salt affects dough texture, making it stronger and less sticky […] Typically the amount of salt in a dough is between 1.8 and 2 percent of the amount of flour, by weight. If there is a large proportion of other ingredients, such as seeds, for which salt also enhances flavor, the percentage of salt could be a little higher.

– Susan, The Role of Salt in Bread, Wild Yeast
3 cups all-purpose flour (I added about another 1/2 cup in 1 tablespoon increments)

With 375 grams – plus a possible extra 63 grams – all-purpose flour called for in the recipe, I’m thinking that 6gm or 7.5gm makes the most sense for a 1.6%-2% Baker’s Percentage of salt. I’ll probably end up using 8gm salt if I up the amount of flour the way that Elle did. (For more raving about measuring salt, please see salt is salt, right?)

13:41 Adding the salt and the currants was a breeze. I’m going to pretend that the slackness of the dough doesn’t matter. We’re headed out on our bikes to – already! – replace our Magic Bullet. (

-BBB baked currant doughnuts recipe
Allow plenty of time for making the dough, […] Rising time is a little over three hours, too.

-Elle, in message to BBBabes

Let it stand in a warm place “until doubled in bulk, 1 hour”? Then “until billowy, 1 hour”?? “Rising time is a little over three hours”?!?

Hahahahahaha. As if. It’s already been 4 hours and I see no sign of any bubbles at all. I’m doomed. This always happens when there’s so much butter and sugar in the dough. And I even reduced the amounts of both!

I suspect we may be leaving it on the counter overnight and baking doughnuts tomorrow morning.

21:32 Virtually no movement at all! But it is a little bit puffier and it’s very very warm to the touch. There is also a quite alarming smell of possibly too much nutmeg and cinnamon – I even reduced the cinnamon too!

But something IS happening. It’s clear that the yeast isn’t dead. After some discussion, we decided to leave it overnight in the oven but because it’s so warm in there now, we’d turn the light off. If nothing much has happened by morning, we’ll just turn the light on again.

15 December 2018, 09:16 It’s billowy!! It’s billowy!! There is an added bonus that the overpowering smell of nutmeg and cinnamon has dissipated. Yay! 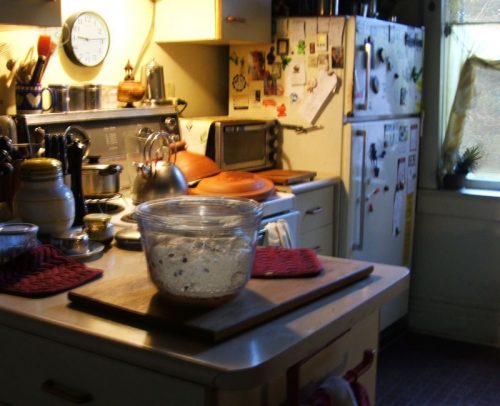 09:46 The doughnuts are preshaped now. Maybe we’ll be having freshly baked doughnuts for elevenses!

[P]ress each ball into a flat 4-inch disc. Using a 1 1/4-inch round cutter stamp out center of each disc. – BBB baked currant doughnuts recipe 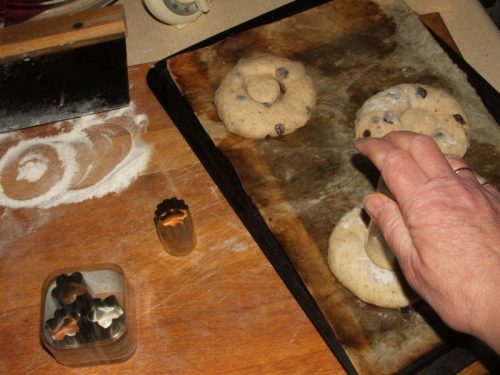 All of our round cutters are way too big. I thought that some lovely fluted cutters would work but decided the holes would be way too small. I ended up using an eau-de-vie glass (about an inch in diameter). The doughnut holes might end up being still be too small, but I’m hoping they’ll puff out a bit. The doughnuts and their holes are now in the oven with only the light turned on. Fingers crossed that they will have “risen slightly” when I check on them.

11:29 Wow!! Something smells fabulous! The doughnuts are half done; I just turned the trays around in the oven. And oooops!! When I say “doughnuts”, I’m using the term lightly. They have all pretty much closed up….

11:53 Well. If it were still Daylight Saving, we would be right on time for our elevenses.

Slathering melted butter on the just baked buns and holes was child’s play. Initially, I overturned them onto a saucer of sugar. That turned out to be a little annoying. So I put the buns and holes onto a large plate and scattered the sugar overtop. Once the doughnuts and holes are eaten, we’ll recycle any sugar on the plate. 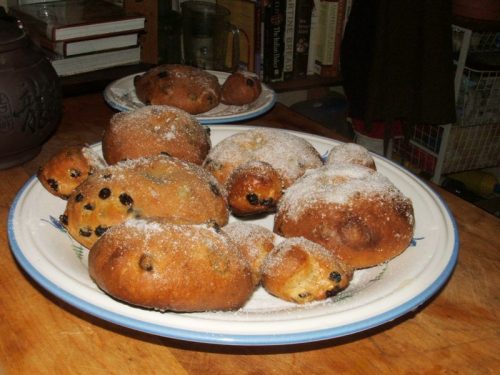 Wow! They taste JUST like doughnuts: the good kind of doughnuts. Even though I reduced the sugar and butter, they’re still beautifully buttery and exactly the right sweetness. They’re soft and pillowy, but not too soft or too pillowy. They’re ju-u-u-st right! 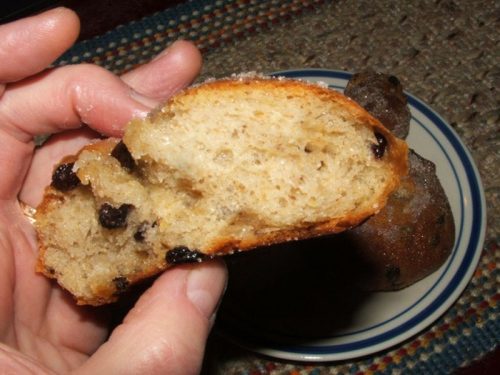 Many thanks for choosing Currant Doughnuts, Elle! This recipe is a keeper!

Here is the BBB recipe for Baked Currant Doughnuts that we were given. And here is what I did when I halved that recipe to make them:

Baked Currant Doughnuts
adapted from a recipe by Robert Jorin, of the Culinary Institute of America at Hyde Park, NY

Transfer to a platter and serve immediately with coffee. Or tea.

Butter and Sugar: The BBB recipe calls for considerably more butter and sugar. But, knowing from experience that these ingredients can really slow down the rise, I reduced the amounts. I doubt that it makes much difference in the final flavour. Except that our doughnuts won’t be cloyingly sweet.

Rising Time: If you are planning to bake these on the same day as mixing the dough, make sure to start early. The rise times (at least in our kitchen) are considerably longer than the times noted in the BBB recipe.

Cutter for Holes: Don’t be afraid to use a LARGE cutter to punch out the holes. The holes will close up as the doughnuts are baking.

[P]ress each ball into a flat 4-inch disc. Using a 1 1/4-inch round cutter stamp out center of each disc. – BBB baked currant doughnuts recipe 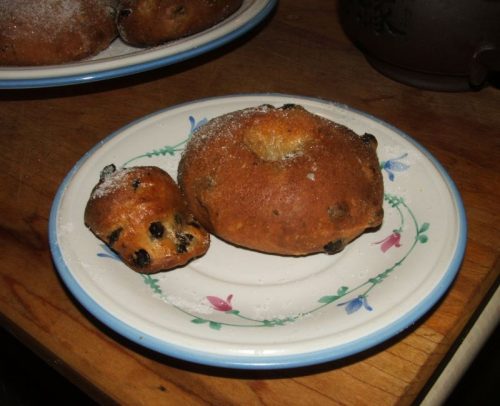 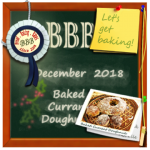 Pat (aka Elle) is the host of December 2018’s Bread Baking Babes’ project. She wrote:

While browsing through a Food and Wine Holiday Recipes book, I saw this recipe for baked currant doughnuts and decided that this would be a fine recipe for December. […] With the granulated sugar coating they also look sort of chilly or covered with frost…seasonal. You can use a different dried fruit instead of or in addition to currants, you can play around with the flour and how you treat them once they are baked, but do make them as baked donuts, preferably with holes.

– Pat (aka Elle), in message to BBBabes

We know you’ll want to make Baked Currant Doughnuts too! To receive a Baking Buddy Badge to display on your site: make the doughnuts in the next couple of weeks and post about them (we love to see how your bread turns out AND hear what you think about it – what you didn’t like and/or what you liked) before the 29 December 2018. If you do not have a blog, no problem; you can also post your picture(s) to Flickr (or any other photo sharing site) and record your thoughts about the bread there. Please remember to email the Kitchen of the Month to say that your post is up.

Please take a look at the other BBBabes’ December 2018 Baked Currant Doughnuts.

As usual, it appears we are becoming ever more complacent and/or willfully ignorant.

Of course, it’s fictional that Marie Antoinette said those words. Thinking about who exactly may have said them – and when, I’m immediately put in mind of the preface John Steinbeck wrote: “Readers seeking to identify the fictional people and places here described would do better to inspect their own communities and search their own hearts, for this book is about a large part of America today“.

But this is not about fiction. This is reality. Indeed, it is about an increasingly larger part of the world today.

Paul Taylor, executive director of Foodshare Toronto […] argues food banks have created a secondary food system for impoverished people, when what’s needed are long-term solutions to address the root causes of poverty. He believes the best way to address food security is to increase basic incomes through such measures as raising minimum wages and building more affordable housing.

Whether or not the government’s decision to cap the minimum wage and/or fuel prices are causing greater poverty, it still remains that support of the food banks is needed more than ever. It’s essential that those of us who can, must share our wealth by donating to at least one of the reputable Food Banks in our communities.

Our supermarket has a rewards program that is “unlike any other. Tailored specially for you, with exclusive events and offers on the items you buy the most. From things you need to the indulgences you love, get rewarded for being you”. I bet that there is something similar where you live.

Following our friend R’s lead, rather than using the points just for ourselves, we use them to buy our groceries BUT make note of the amount and send an equivalent amount to our local foodbank for them to use as most needed.