summary: recipe for baguette with malt – based on Susan’s (Wild Yeast) recipe for “Baguettes with Poolish”; information about YeastSpotting, World Bread Day and World Food Day (click on images to see larger views and more photos) 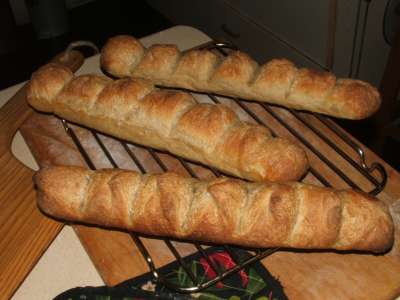 A while back, Susan (Wild Yeast) posted a baguette recipe. Along with the recipe were tantalizing photos of her baguettes. Beautiful baguettes. Crusty. Golden. Perfectly scored.

And one of the baguettes looked like a string of beads.

I WANTED to make baguettes that looked like strings of beads!! I asked how it was done, and here is the reply:

It’s a baguette that is snipped as you would for en epi, with each section folded back on itself. Hard to explain without pictures.

Armed with the handy words “en epi” I googled to find a video “La coupe en épi” at lepetitboulanger.com and got a glimmer of how it was done. But I also saw what was meant about “hard to explain without pictures”…. Being chicken-hearted, rather than plunge ahead recklessly, I decided to wait to see Susan’s pictures of “each section folded back on itself”.

We’re pretty happy with the Rose Levy Beranbaum baguettes I’ve been making and initially, I was just going to use Susan’s shaping method with our baguette recipe.

And then I got nervous again. What if the dough was the wrong consistency?

So I decided to make Susan’s recipe and headed into the kitchen to put together the starter.

Day 1 evening: Intriguing!! The recipe calls for 0.1g yeast!! Susan handily translates that to “a pinch”. But I love weighing ingredients. Yes it’s true: measuring is my life. (What IS the name of that really terrible British murder mystery farce from sometime in the 1960s that had a character who was always saying “knitting is my life”?!)

Apparently, they’re protecting me from the hordes of evil people who would snap up the digital scales to sell illicit drugs. Thank you Canadian government for your kind concern for my welfare. Because of course I know that the inability to get digital scales that measure in fractions of grams will definitely stop people from selling drugs illegally. Yes indeed. No question about it.

But enough complaining… rather than measure with a scale, I made a guess and just threw in about 10 grains of yeast. 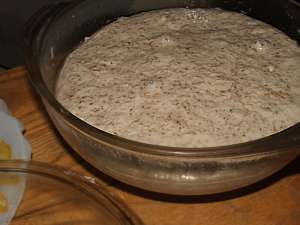 Day 2 morning: Bubbles!!! Whoa! I can’t believe how bubbly the starter is, with only a few grains of yeast! Cool.

And I started measuring the ingredients for the dough. Very very interesting!! Susan calls for 12.7 gm salt and has in brackets 2⅛ tsp of salt. I used our teaspoons to take the salt from the container and dumped it into the bowl on the scale. Only 7 gms! I added another teaspoon of salt and the scale measured 10 gms. I stopped there. A tablespoon of salt is probably enough for that much flour. But what a difference in volume!! Susan’s salt must be a much much finer grind than our salt!

I mixed the dough and left it for about 20 minutes. Then, without adding any flour to the board, I started kneading it. What fabulous dough. It’s firm but not too firm. Elastic but not too elastic.

I couldn’t get over that it didn’t really want to stick to the board as I kneaded. But of course, I used the dough scraper to make sure that all the kneaded dough went back into the rising bowl.

After an hour, I stretched and folded it. I still couldn’t get over what wonderful dough this was! If this isn’t a good enough reason to use a scale rather than cups to measure the ingredients, I don’t know what is!

Baguettes
based on Susan’s (Wild Yeast) recipe for Baguettes

1. Water: Tap water is fine to use – just make sure that it has stood for at least 12 hours so that the chlorine has dissipated. Under no circumstances should you use water from the hot water tap. Of course, saying that it is unsafe to use water from the hot water tap might be an urban myth, but why tempt fate? Heat the water in a kettle or microwave and add cold water until it is the correct temperature, (use the baby bottle test on the back of your wrist – your fingers have no idea of temperature!) Or you can use a thermometer. The temperature should be BELOW 120F because yeast begins to die when the temperature is higher than 120F.

2. Malt Powder: Susan’s recipe calls for “non-diastatic” malt powder. I have been unsuccessful in finding non-diastatic malt powder and just use regular old malt powder that we got at the health food store. This means that it will merely sweeten the bread, rather than help it to rise. But we love the resulting flavour with the addition of this probably diastatic (whatever that is) malt powder.

4. Scoring: I confess that I’m still pretty rotten at scoring. I find my best scoring has been done with scissors. But David Snyder’s Bread Scoring Tutorial (The Fresh Loaf website) is an excellent resource. And Susan’s YouTube video of Dragon Tail Baguette Shaping is wonderful. I admit that my dragon tails aren’t quite as elegant as Susan’s but I’m still quite pleased!

5. But I want Warm Bread!!: If you wish to serve warm bread, reheat it after the loaf has cooled completely. To reheat UNsliced bread, turn the oven to 400F for 5 minutes or so. Turn the oven OFF. Put the bread directly on the rack in the hot oven for ten minutes.

» recipes from OUR kitchen – index 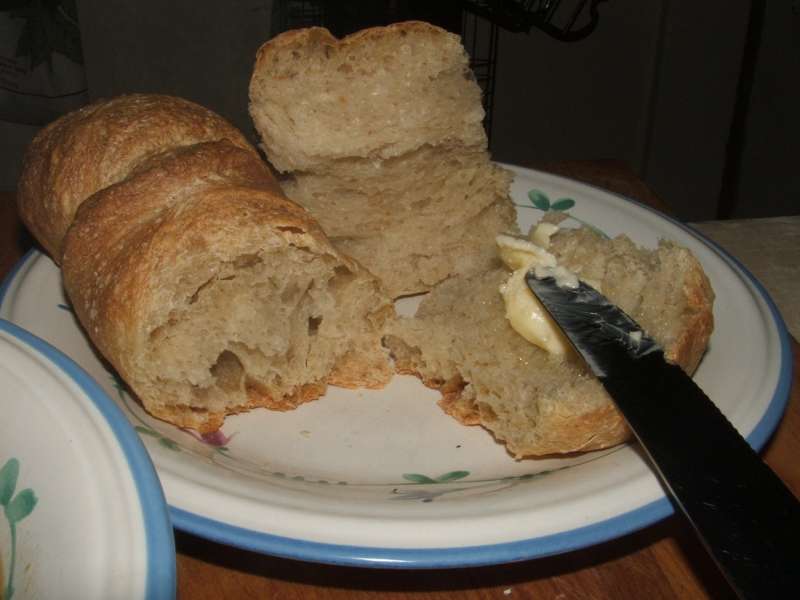 Day 2 evening: We couldn’t have been more pleased about these baguettes. The crumb was exactly as a baguette crumb should be: chewy but soft. And the flavour!! Mmmmmmmmmm….

Eventually, with practice, I’ll achieve the beaded quality that Susan did. But even these roughly shaped beads were absolutely stellar. Thank you, Susan! For both the scoring technique and the recipe.

We LOVE this bread!

Let’s bake and talk about bread on this day again! Anybody is cordially invited to participate. Lots of people stopping by this blog that weren’t around last year, I encourage both old and new friends to join in. And please spread the word!

The theme is open, just bake a bread with or without yeast, use sourdough, experiment with different flours, add some seeds… It’s up to you!

For more information and complete details on how to participate in World Bread Day, please read the following:

And finally, before completing your WBD post, if you haven’t already, don’t forget to read about

Each week, Susan (Wild Yeast) compiles a list of many bread-specific recipes from across the web. And what a fabulous resource this has become. For complete details on the recipes that have been made and how to be included in the YeastSpotting round up, please read the following:

Some time ago, Ruth (Ruth’s Kitchen Experiments) created this event to urge herself (and everyone else) to actually make the several recipes they have bookmarked in various books, magazines and internet pages. I think it’s a brilliant idea.

But events come and go and posting roundups can become very time consuming and the event is no longer an official event. Even so, you might like to look at previous bookmarked recipes’ roundups:

High 5! I did it!! I have now made a minor dent in the bookmarked “I’ve GOT to make that now!” bread recipes in firefox.

This year’s World Food Day theme is “United against Hunger”.

There is an unprecedented number of people in the world who will not be able to participate in World Bread Day. This is not because they are opposed to bread. It’s because there IS no bread.

As you think about bread today (and every day this year), please do more than just think about those who are in grievous need. If each one of us takes action today, collectively, we can end hunger.

Please read more about what YOU can do to take your part in World Food Day:

(As always, if you have something to add or say about ending world hunger, please remember to post your thoughts and ideas on your blog, facebook, at work, etc. etc.)