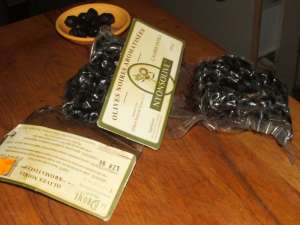 Almost a week after the funeral, he visited Lon’s room, quite bare of Lon – without even the apple box half filled with sawdust for spitting into. The pipes and their rack were missing; the room was quite unhaunted. David felt that in some way a person’s room should hold a trace of them; something should linger. Deserted houses were generally stilled with nostalgia for those who had once lived there; there was usually a mason jar in the kitchen part – an old lady’s shoe with a limp top – a rusted spoon – something.

My mother-in-law’s room is still filled with her presence. Indeed, the whole house is filled with traces of her – her scent in a drawer brimming with fine silk scarves – silk scarves galore of all patterns and colours, a festival of colours and designers (some famous, some should-be-famous) all of the scarves tasteful, even the garish ones from the 1970s. There are notebooks full of her thoughts. The bookshelves are bursting with books on subjects close to her heart and the walls and shelves and side tables with pictures and photos reminding us all of the wonderful vibrant woman she was.

And there, in a basket way at the back of a cupboard were several packages of vacuum sealed oil cured Nyons olives. I remember well T’s dad’s joy as he bought those olives that day in Nyons, saying “These are J’s favourites!”

At the time, we opened one of the packages and tasted the olives, wondering how could they be better than other oil cured olives. But they were. They were fabulous. Olivey, but not too olivey and sweet yet salty, but not too salty. Olives to be savoured and enjoyed slowly, to be eaten with bread and a glass of wine. And maybe with a bit of goat’s cheese.

Oh my. Dry. Powdery. Hard as a rock. And yet with a hint of the distinct flavour of a Nyons olive. 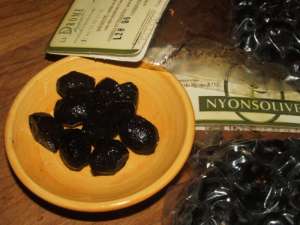 And someone had a brilliant idea. What if we re-constituted them? We’d add boiling salted water and leave them to soak overnight. We did just that. The next day, T tasted one and said it had faded a bit. He drizzled on some good quality olive oil and tasted another olive. His face lit up.

The first time, we ate the olives with bread and wine and toasted T’s Mum as we revisited Nyons in our minds once again. How she would have loved to be with us.

What am I saying?! She was!

I can hear her laughing.

17 September 1996 – 16:10
NYONS Cloudy and overcast 24C We just came down the strangest hill I have ever experienced!! I was struggling to go 12 km/hr as I descended. There wasn’t a breath of wind. The others were way ahead of me as I pushed my way on the seemingly steep downward grade. But when I finally reached the others, they all said they had experienced the same thing. It must be some weird optical illusion. [It turned out that we had climbed the whole way.] […] We road along the river on a practically deserted small road past fig trees, bamboo, olive trees, vineyards – some picked already, others with grapes hanging heavily from the vines; purple and plump. By the side of the road was dill, lavender and I smelled sage. […]

19:40 We walked around Nyons – beautiful quiet city. There is a Roman Bridge that says 15th century but G maintains it’s much earlier. We saw the coolest sundial pendants [and vacuum sealed packages of Nyons olives]. We may go back tomorrow to buy some. […] There is a curious tall wall high above the city. It looks like one wall of a church, the rest of which has been destroyed. We’ll investigate tomorrow.

18 September 1996 – 10:45 We walked around this morning in this stunningly beautiful town up through narrow winding streets climbing stairs going past stone houses with lovely courtyard gardens and flowers hanging from windows. We reached a little chapel that was actually not so little. It has a cake-like affair on top of the building.

– me, my voluminous diary, bicycle tour from to Dijon to Avignon, 1996 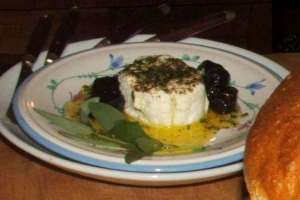 We packed some of the treasured expired olives packages and brought them home with us. We reconstituted them and served them with goat’s cheese and herbed olive oil to guests, regaling them with the story of how we came by expired olives in the first place and assuring them that nobody had been even remotely ill after eating them. Each guest, eyes wide, gingerly tried one olive. Each person, eyes still wide, was thrilled and all the olives were gone in no time.

Can you hear my mother-in-law’s pleased laughter still? I can. 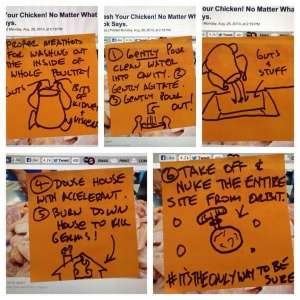 And speaking of fear of food…

Are you horrified that we ate expired olives AND served expired olives to guests? Would you be equally horrified to learn that we frequently eat cheese that is past its best-before date too? And yoghurt? (Rest assured that we always warn any guests if we are serving them expired food.)