[W]hen summer became September and the local produce staring at me was eggplant, muscadines, peppers, and okra, I had to go work – Vivian Howard, Chapter 18: Okra, p.399 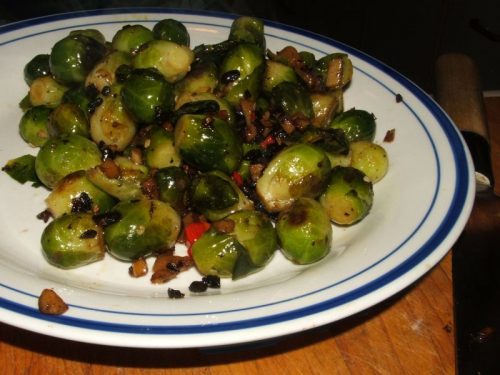 This past summer, when we were blissfully sitting outside on the porch, listening to the leaves rustle and reading Vivian Howard’s excellent memoir/cookbook, “Deep Run Roots”, when we got to the recipes for ‘Grape-Roasted Brussels Sprouts and Sausage’ and ‘Brussels Sprouts, Apples, and Pomegranate with Blue Cheese Honey Vinaigrette’, we knew that as soon as Brussels sprouts started to arrive at the vegetable store, we HAD to try them. 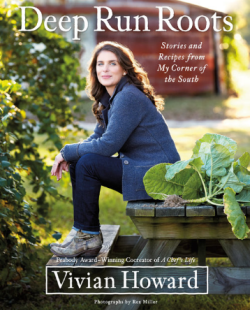 I love blue cheese so much I ignore the way my lips itch when I eat it. Whisking it up with honey and coaxing it over crisp apples and Brussels sprouts turns a cheese that people are sometimes daunted by into a dressing that hard to dislike. (Chapter 22: Apples | Brussels Sprouts, Apples, and Pomegranate with Blue Cheese Honey Vinaigrette, p.496)
I have long loved roasted grapes. One of the first things I picked up from my days watching the Food Network was the jaw-dropping idea that just by putting a seedless grape in the oven, I could transform it into something savory. […] This mixed roast pairs caramelized muscadines with toasty Brussels sprouts, link sausage, and Dijon mustard. It hits every element of taste we humans have. (Chapter 24: Muscadine Grapes | Grape-Roasted Brussels Sprouts and Sausage, p541)

And the summer progressed. We finished reading Vivian Howard’s book and opened up “Burma: Rivers of Flavor” by Naomi Duguid. In the “Mostly Vegetables” section she talks about about stir-frying cabbage with chiles and using fermented soybean to flavour the cabbage more. 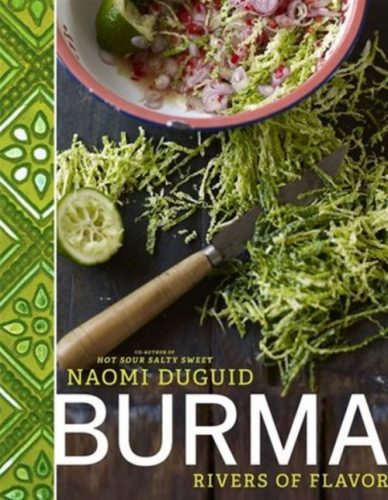 The Japanese word umami refers to a category of flavor, a fifth taste, after salt, sweet, sour, and bitter. It’s the taste that is “meatiness,” which we associate with ripe tomatoes, deep-flavored mushrooms, soup stocks, grilled meats, and more. […] In the cooking of Burma there are a lot of “umami ingredients,” whose major role is giving a dish meaty depth of flavor. They include […] fermented soybeans

We raced to the vegetable store to get cabbage. While there, we saw that there were Brussels sprouts. Well. That would work. Fabulously.

At that same time, we had access to quite a few beautiful hot red chiles from our garden AND from one of our wonderful neighbour’s garden. J plants these devilishly hot chiles and then tells us to take as many as we like because they’re too hot(!) for all but their daughter-in-law and she will never get through them all. 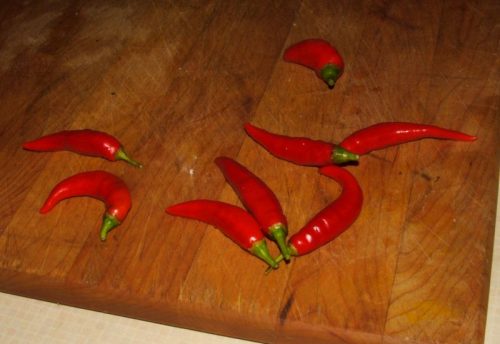 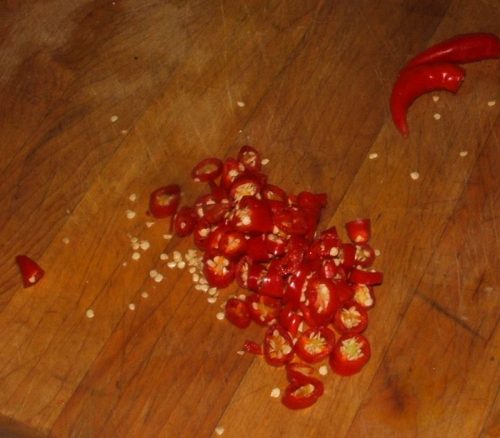 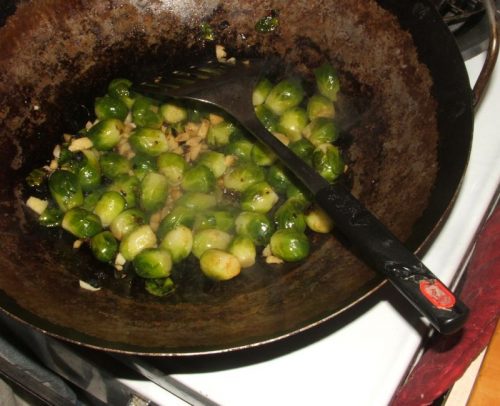 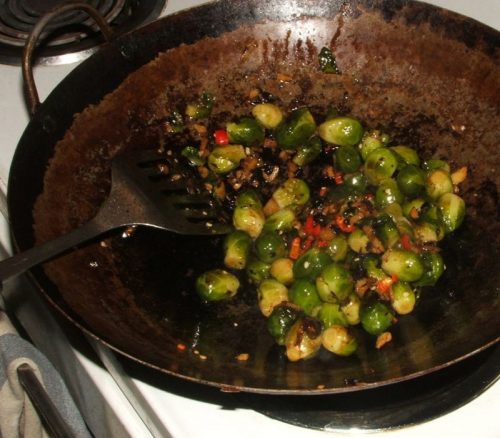 The photographs in this book are stunningly beautiful. We were particularly entranced by photos and description of the Market by Candlelight in Hsipaw.

Equally entrancing was the section on boating out of Sittwe on the Kaladan River:

As we moved slowly through the pale silver of the water, past the darkened riverbanks and the occasional small boat, […] we entered a timeless vast space of wide, wide river and endless open sky, the colors pale and gradually warming in the early light. We were dwarfed by the vastness, a small skiff chugging up a wide expanse of water toward a brilliant horizon. (p.83)

Strangely, though, the recipes and stories were not quite as picturesque and irresistible as we have come to expect from Duguid’s writing. The writing is ever so slightly impersonal, feeling a little more like a travelogue than a diary.

Alas, other books called to us and I’m afraid we took this back to the library without trying any of the actual recipes at all, as interesting and simply flavoured as they seemed they might be, with names like “fragrant fish broth”, “classic sour soup”, “okra shallot stir-fry”, curried chicken livers. Nor did the references to ingredients such as red chile oil, toasted chickpea flour, toasted rice powder, or sawtooth herb change our minds….

Still, if it hadn’t been for reading Naomi Duguid’s lovely book, we probably wouldn’t have tried making Brussels sprouts with chilis and fermented black beans. Thank you, Naomi Duguid! 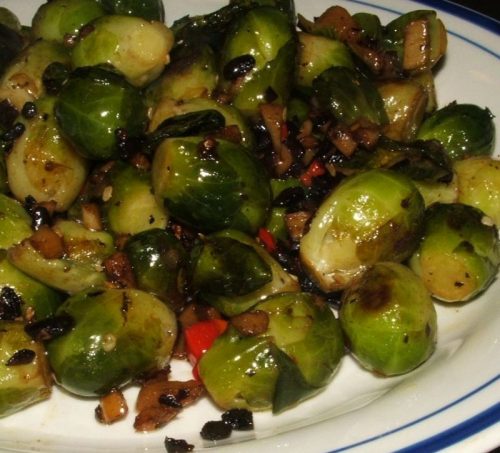 Of course, now that we’re in this massive deep freeze and J’s garden is covered in snow and ice, we’ve run out of those beautiful chiles. But beautiful Brussels sprouts are available at the vegetable store right now. Remind us to remember to try Vivian Howard’s Brussels sprout recipes! (Hmmm. I wonder if we can get anything resembling Muscadine grapes at this time of year.)