summary: thermometer bread, based on the recipe for Harvest Bread with Poolish in “Flour Water Salt Yeast” by Ken Forkish; submission for YeastSpotting and Bake Your Own Bread; (click on images to see larger views and more photos)

Ever resistant to change, I was finally convinced to take the plunge and actually use my thermometer to measure water and dough temperature. 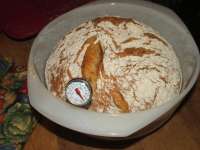 Over the years of bread making, I’ve read in several places about the importance of measuring carefully. Wait! What am I saying? It’s not just years of bread-making. It’s from as early as grade seven Home-Ec! My sister’s Home-Ec teacher even spelled it out by firmly telling her class, “There will be no guess work in our kitchen.”

And yet, both my grandmother and my mother frequently measured salt into their hands, scattered “some” flour, added “enough” water and cooked and baked “until it was done”.

So that’s what we did too. Even after Ms. Home-Ec Freak intoned, “No guess work”.

And then, a few weeks ago, I read the following:

The raisin-pecan bread we make at my bakery tastes so good that sometimes I just keep eating it even when I’m not hungry. I love this bread when it’s at its best. But there was a period when that bread tasted just ordinary, and I figured that it probably wasn’t getting the full amount of fermentation it needed to completely develop its flavor. […] Manipulating time wasn’t an option, so my choices were to play with one of three other variables: the amount of leavening in the dough, the ambient temperature of the bulk fermentation stage, or the temperature of the dough after its final mix. I decided to experiment with the latter and mixed the dough with water that was 3°F (about 2°C) warmer than what we had been using. Whereas our dough had been coming out of the mixer at 75°F (24°C), with the warmer water the finished dough was at 78°F (26°C). All of the other variables remained the same. The next day the bread was just as it should be: complete, full of flavor, and not sour, with just a gentle background tingle in the mouth.

I am now half-way through reading a library copy of “Flour Water Salt Yeast” by Kevin Forkish. The book doesn’t necessarily say anything that I haven’t read before but Forkish’s arguments are compelling. I know I’m really resistant to change and have always advocated doing the “baby-bottle” test for measuring ideal temperature for rehydrating yeast.

I have also, in the past, played fast and loose with the water temperature – thinking that cold water would work just as well as warm. The only thing I was careful about was that the water was never too hot. But I have never been careful to ensure that the water wasn’t too cold.

For all my breads, I’ve achieved the best flavor when the freshly mixed dough has a temperature between 75°F and 80°F (24°C and 27°C). […] When you’ve mixed your final dough and are about to cover it for rising, or bulk fermentation, take a temperature reading with a probe thermometer. If the dough doesn’t fall between 75°F and 80°F (24°C and 27°C), you should make adjustments next time.

So, the other day as I mixed sandwich bread dough, I actually used a thermometer to measure the temperature of the water. And I autolysed the mixture before adding salt and yeast.

By the end of the mixing and kneading, the dough was markedly warmer than usual. It was 72F – still 3F colder than Forkish suggests.

But I was excited. The resulting sandwich bread was better than ever. I decide to try one of the recipes in Forkish’s book.

Tuesday 18:45 Okay, I just finished mixing the poolish for “harvest bread”. It wasn’t easy getting the water to be 80F!! (I might just resort to doing the baby-bottle test on my wrist in the future.) The glop was 70F after I finished mixing it. I’m not sure if ideally it’s supposed to be 5F warmer. We’ll see how things go.

Wednesday 07:50 When I told the other BBBabes about my latest folly, Karen (Bake My Day) mentioned that she “never fiddled around with a thermometer for the water”. Well, until now, neither have I!

Not only have I never fiddled around with a thermometer for water, I’ve downright scoffed at the idea. And yet, in a few minutes, off I go to mix 105F water into the rest of the ingredients for the harvest bread. I’m also using his hand-mixing in the bowl method rather than kneading on the board. (Even though I really do love to knead)

Wednesday 09:10 The dough I just put together was only 70F when I finished mixing and kneading it. But I can tell from the feel that it’s already markedly warmer than any previous bread doughs I’ve made. It will be really interesting to see if there is a huge difference in the final bread.

15:53 Our round basket is just a tiny bit too large for the casserole dish I’m using, so I put a tea towel into the sieve and proofed the loaf there. I sure hope I will be able to get it out!

Forkish says to use a cast iron lidded pot (like Le Creuset) for baking. We’re way to cheese-paring to buy one of those! So I’m using a lidded pyrex casserole dish and hoping that nothing bad will happen if I preheat it when it’s empty. We only have one casserole dish though… hmmm… what to do about the other loaf!

18:53 As an experiment, I baked one of the loaves directly on the stone, spraying it with water and slashing it (using scissors) just before putting it in the oven.

The other one was amazingly easy to plop out into the hot casserole dish. It didn’t even need any nudging. Note that the dish was neither greased or lined with parchment paper. How cool is that?!

It’s cooling now and we’re going to cut into one of the loaves for dinner.

I was amazed that the bread baked in the pyrex casserole dish did indeed pop right out without any nudging – just as Forkish said it would. I had visions of myself cursing and hacking away at the sides with a knife.

I can’t wait to see what the inside of the bread looks like. I’m thinking that the crumb might be the kind that has really shiny holes.

It was crackling like crazy when it came out of the oven. 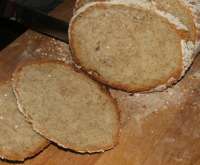 We served the casserole dish bread first with stew and rapini with garlic. It was beautifully crusty on the outside. I was a tiny bit disappointed with the crumb though. The holes weren’t quite as large as I hoped. And what holes there were weren’t shiny! Waaaahhhhh!!

It is possible that the oven wasn’t quite hot enough. While I’ve mastered using a thermometer for checking water temperature and inner bread temperature after baking, I’m still not quite ready to check the actual temperature in the oven.

The next day, we had the stone-baked loaf with lentil soup and cheese. It was quite delicious.

Leftover bread was great for grilled cheese sandwiches for lunch. We used the last ends of the bread to augment some left-over cornbread to make great stove-top dressing to serve with roasted chicken thighs, mashed potatoes, green beans and gravy.

Thank you, Ken Forkish!! This has been really fun. It’s definitely worth several more tries.

Even though I vowed not to buy yet another bread book to languish on our shelves, I think I will have to break my vow. I think I neeeeeeeed this book. (I might even be crazy enough to try creating another pet.)

1.) Water: In his water temperature video, Forkish mixes hot and cold tap water. Please do not use water from the hot water tap. (How old are your pipes? How many toxins want to leach out? Do you really want those in your bread?) Instead, heat the water in a kettle or microwave. To create 80F and 105F water, add cold water until it is the correct temperature – a probe meat thermometer works fabulously. Please remember that the water temperature must be BELOW 120F because yeast begins to die when the temperature is higher than 120F.

2.) Yeast: Forkish calls for instant yeast and says to add the yeast directly to the flour. (As it happens, we still have instant yeast on hand because someone bought the wrong kind of yeast. No actual finger pointing – suffice it to say that it’s someone whose name begins with E and rhymes with Sizzledbrain.) However, usually, I use active dry yeast – because that’s what I like. (Did I mention I am resistant to change?) In the future, I plan to add active dry yeast to the water first to rehydrate before adding the flour.

3.) Salt: Forkish suggests using fine sea salt because it’s easier to mix into the dough after it has autolysed. But we almost always have the more coarsely ground Kosher salt around instead of fine salt. So when I was making the bread, I held back a small amount of water to dissolve the salt before adding it to the ingredients to ensure that it would be well encorporated in the final dough. 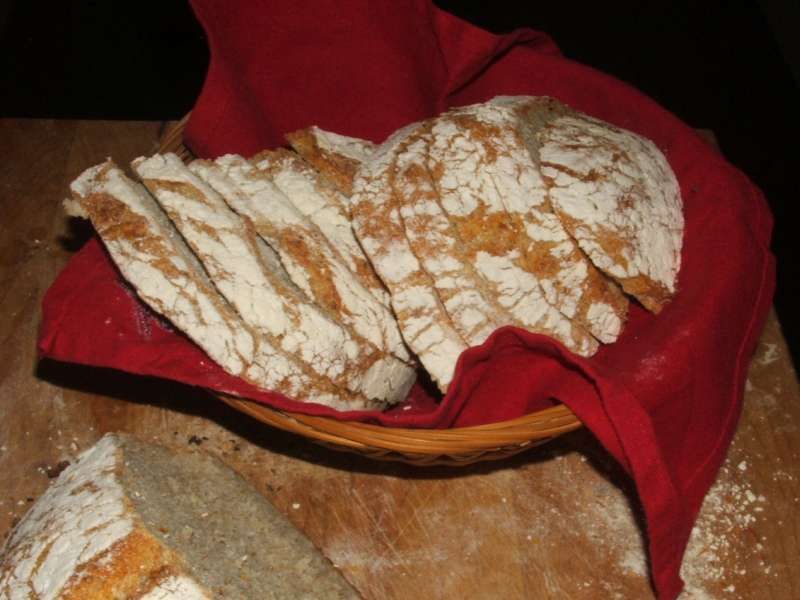