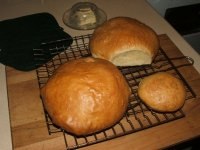 For the recent event World Bread Day ’06, Stephanie (Dispensing Happiness) made Pao a Moda de Sao Miguel. I was very excited when I saw the photographs she had taken. This is one of my very favourite kinds of bread!

There is a Brazilian bakery nearby that sells it but I’ve always wanted to try making it myself. I contacted Stephanie (isn’t email great?) and discovered that the epicurious recipe for Portuguese Cornmeal White Bread (Pao A Moda De Sao Miguel) from Gourmet 2000 is the same one that is in her Gourmet collection from 1975.

A couple of weeks ago, T had purchased some very fine cornmeal. As soon as I saw it, I knew it was too fine for our regular cornbread but thought it would be perfect for Portuguese Cornbread. And so on Sunday, I rolled up my sleeves and got cracking.

I confess that I changed the recipe just a little. I added only ½ Tbsp sugar and ¼ c of whole wheat flour. (The whole wheat is to mimic handmilled grain.) As I kneaded the dough, I got more and more excited. It was very silky and springy – though a little more stiff than I expected. I thought it was going to be one of those really soupy doughs. It really was wonderful to knead. I hardly had to use any flour for dusting. This is probably because of the butter content in the dough. Really it was MOST satisfying.

It rose beautifully on the counter over the course of the afternoon. As I formed the loaves, making two normal sized loaves and one small one (just to see if it would work), I again remarked on the wonderful smooth texture of the dough.

In the early evening when the shaped loaves were doubled, I preheated the oven and just before putting them in, I was about to brush them with 10% cream (heh, we didn’t have any milk in the fridge) and…

AUGH!!!! I forgot to put the stone in the oven!

Flurry of activity as the risen loaves were quickly covered with plastic again and the stone was put in the oven to preheat for only 10 minutes instead of the requisite 30. We decided that as it was going into a very hot oven, the stone would be nicely heated through in that 10 minutes.

Anyway… I uncovered the risen loaves again and slathered them with cream. Into the oven they went for about 50 minutes. Of course the little one took less time to bake. I put them on the rack to cool.

T loved it. It was exactly the texture he was hoping for.

Back to the drawing board… maybe next time I’ll get it right.

But let me hasten to add that even though it isn’t exactly like the Brazilian bakery cornbread, many many thanks, Stephanie, for showing us a really excellent recipe for bread that makes the most fabulous toast. With butter and honey it’s great. Goat cheese and honey is equally stellar.