summary: First try at making Wild Bread, based on a recipe in “All You Knead is Bread” by Jane Mason; training a new pet; problems with over-rising and developing the gluten;

I know. I swore I’d never get another pet and never put myself through the pain of making wild bread again. Ha. Never say never….

Sure, these first loaves may not be the prettiest. But they’re light-weight and there’s only the tiniest hint of sourness. Yay! 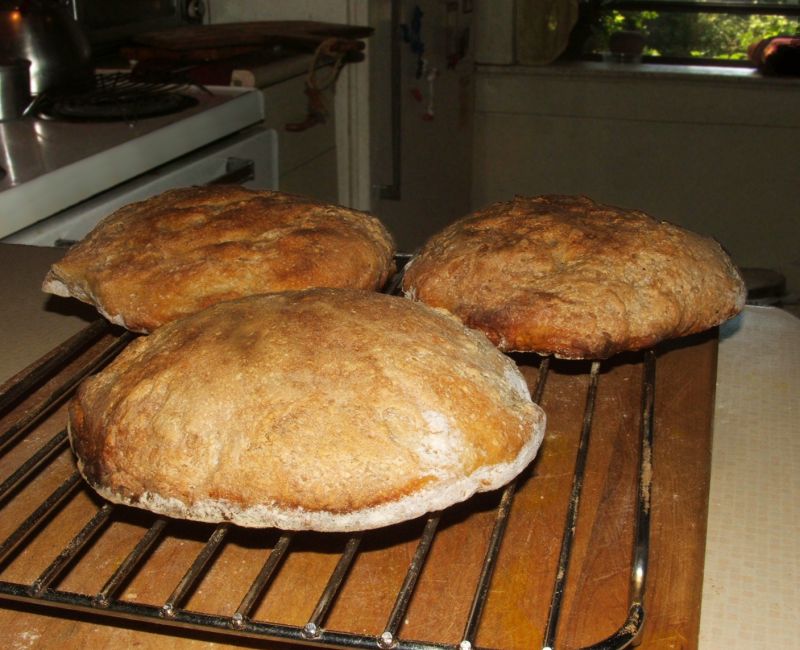 Don’t be afraid to make a mistake. Bread is forgiving and the ingredients are cheap. If your loaf is ugly you won’t win a prize, but you can still toast it, and sourdough toast is particularly yummy.

-Jane Mason, All You Knead is Bread, p90 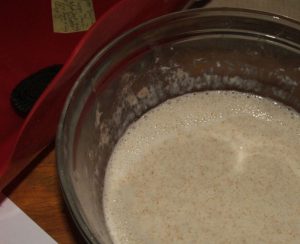 Whoa!! There are bubbles galore. […]So, now that we had a bowl of bubbles, I decided to throw caution to the wind and take the next step to making bread. […] [Jane suggests using 90g starter, 90g flour and 90g water.] And because I’m so confident that this will work, I mixed 180gm of the brand new starter with 180gm unbleached all-purpose (no additives) flour and 180gm body temperature water.

17 July 2017: 12:36 Before adding the new flour, I couldn’t stop watching as bubbles were popping. It had risen was well past the half-way mark. 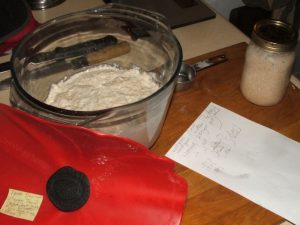 So I scraped it out and moved it into a bigger bowl.

Measure 100g/3 1/2 oz. of the refreshed sourdough back into the vat in the fridge and leave the rest in your bowl. Add the flour and water to the bowl to make a predough. Cover and leave on the counter for 8-12 hours.

I put the sludge into the jar. A bigger Mason jar. Of course. 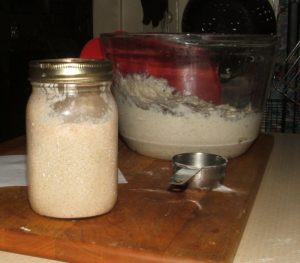 14:13 Hmmm. This dough appears to be very active. After just 4 hours, it has almost doubled. Do I dare to go ahead and make the actual dough? Or should I put the predough in the fridge to arrest it? ie: is the “8-12 hours” necessary to the development of the bread? 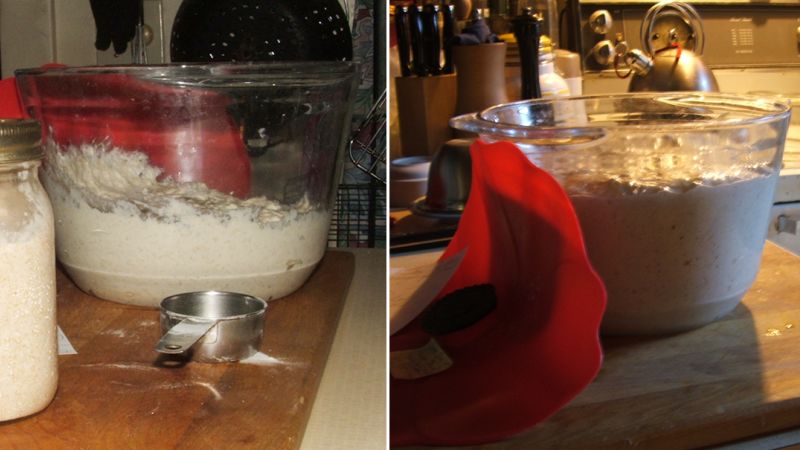 18:51 I threw caution to the winds and went ahead to mix the actual dough. I decided to ignore Mason’s instructions to add butter and honey. We don’ need no stinkin’ butter and honey in OUR bread…. 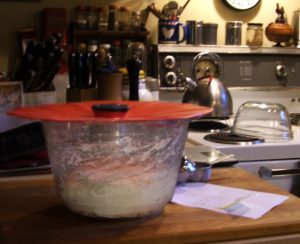 Silly me. Because of my stellar reading skills, I imagined that I’d be shaping it that evening and putting the shaped loaves in the fridge overnight to bake in the morning.

18 July 2017: 08:07 Last night, just before going to sleep, I reread a little of Michael Pollan’s report of his experimentation with making bread with a natural starter:

The morning after starting my sponge, I woke up eager to head down to the kitchen to see what, if anything, had happened overnight. When I’d mixed the stuff the night before, the heavy paste of flour and water filled a two-cup measuring bowl halfway to the top. Incredibly, it had doubled in volume overnight, and I could feel it had lightened considerably, achieving a consistency reminiscent of marshmallow. Through the glass I could see that the paste had become a gassy foam, shot through with millions of air bubbles. 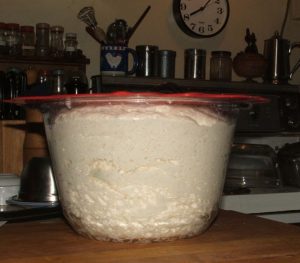 So, in trepidation, I tiptoed down to the kitchen to look.

Just like Michael Pollan’s dough, our dough had doubled overnight too!

So we shaped it. T shaped one loaf and I shaped the other two. I was very disapproving of T’s technique.

Whoa. That’s very sticky dough! I’ve never experienced the problem with the dough refusing to leave the sides of the bowl! (Is this why everyone is always saying to oil the rising bowl? 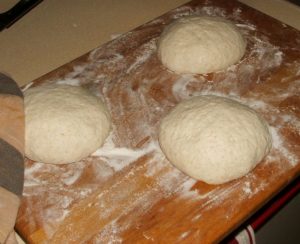 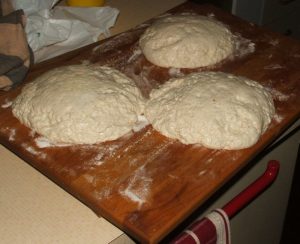 10:47 The loaves that I shaped have broken apart and collapsed. Has it over-risen?? The loaf that T shaped has pretty much held its shape. So much for being disapproving. Remind me to take notes on how he shaped the bread….

12:31 It smells fabulous! Almost like cake. But not sweet and cloying.

Sound the bells! I have reinvented the wheel!!

Granted, we were a little disappointed that the loaves were so flat and had exploded a little in the oven. Don’t get me wrong; there was virtually no oven spring.

Still, we were determined to eat the bread. And so, for dinner that night, we reheated it, sliced it and took a taste.

Expecting the worst, I have to say that we were pretty thrilled. Granted, it was a little bit sour but not so sour that it was impossible to eat. 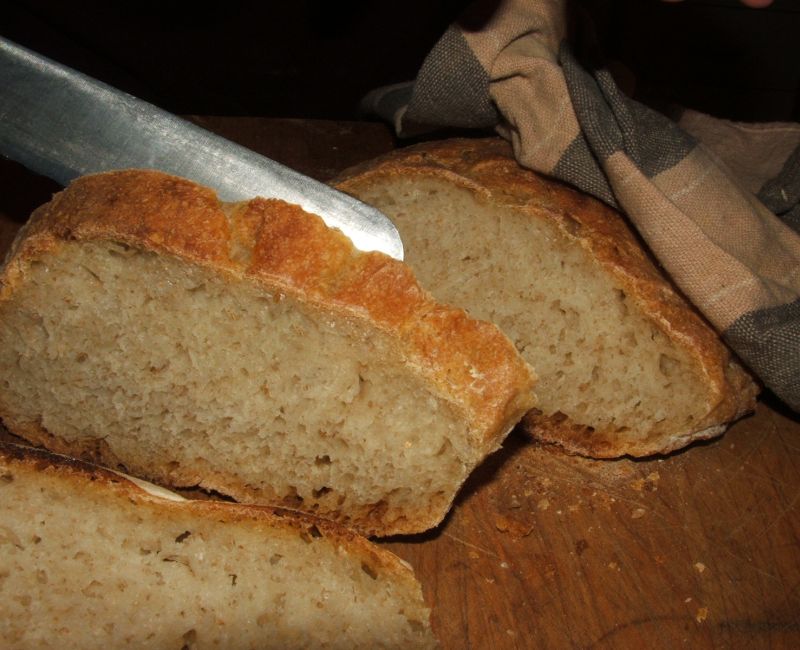 The next morning, we toasted it the last little bit of one of the loaves. And almost broke our teeth. Alas, the sourness from the night before was a little more pronounced.

Did I say “a little”? Please allow me to rephrase that. It was a lot more pronounced. A lot. And the crust was way too tough.

So, we cubed the rest of the bread, lightly fried it (putting the tiniest hint of gold on it) to make the most brilliant bread, tomato and basil salad. Sorry, no photographic evidence. We ate the salad before anyone even thought of getting the camera out…

I think I know where I went wrong and why the bread became so sour. It had to be those 24 hour periods of resting for “8-12 hours”.

It’s my strong relief that there is no single way to bake bread. […] [T]he reality is that anyone can produce good bread – and good sourdough bread at that – with a little practice. […] Follow recipes, experiment, and do what works and what you like. Want square bread? Bake in a tin. Want round bread? Proof in a basket. Don’t want big holes in your bread through which the ham and the jam fall through? Fantastic. Holes are not the definers of success in the world of bread, fashionable though they may be.