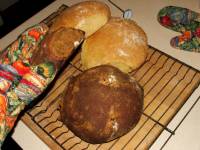 Today is World Bread Day! And Zorra (Kochtopf) invited food bloggers to help celebrate the occasion. How could I refuse? I bake a lot of bread. We LOVE bread!

As you may have guessed from the title, I had some difficulty choosing what bread to make. I make sandwich bread every week. While I do like it very much, it doesn’t quite qualify as a festive bread and World Bread Day seems rather festive, don’t you think?

So I examined our various bread recipes and finally narrowed it down to four:

Because I was starting today, I could eliminate the couronne because I would have had to make the starter yesterday. (But I will be making it again soon. It’s just too good!)

We had decided to have broccoli stirfry, chicken & peanuts and rice tonight. That’s not Indian, so naan could be eliminated too.

I am a huge fan of grainy breads and really wanted to make the multigrain bread. I love the nutty taste and coarse texture. Someday I’d love to try making a Russian style blackbread. But T is not so thrilled with our multigrain bread (too grainy… too healthy… :lalala:).

But truth be told, I was leaning towards the molasses fennel rye ever since I found out about WBD. It is the first kind of bread that I ever made and probably what got me started on this bread making craze that has lasted at least 6 years now. And because of the recent reminder that I really do like fennel, I decided that molasses fennel rye bread was the winner. It’s stellar with pâté or cheese and fantastic toasted.

And then as I was perusing the list one last time, I couldn’t help but notice that it’s quite chilly in the house. It made me crave chili con carne; of course, we have to have corn bread with chili! And so that is how I decided what kind of breads to make….

hahaha the joke’s on me. When I told T that I was making chili con carne and cornbread for tomorrow, he said that he would rather have our unyeasted cornbread.

We’ll just have the yeasted cornbread toasted with honey for breakfast! Yum!