summary: how to tell if the wild starter is ready; bubbles are an indication but not foolproof; float test is essential; working towards predictability; scheduling the starter; feeding;

“[It] might be the case that your starter is rising, but you’re not there to see it. If you feed at night, it might be rising up while you’re asleep, and by morning it has fallen again, so it looks the same.” – Donna Currie, Sourdough Starter Frequently Asked Questions | Serious Eats

With all those bubbles, the starter on the left looks ready but is not;
the one on the right with the smaller bubbles seems unready but is raring to go. 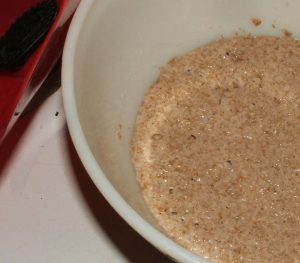 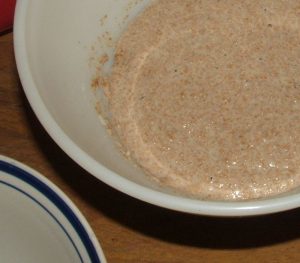 How did I know? It was because I finally understood that I needed to do the Float Test. This was really brought home to me a couple of weeks ago when one of my sisters was visiting. I was showing off to her about how essential the Float Test is. After we admired the starter wildly bubbling, I filled a small bowl with water and proudly said, “watch!” as I dropped a bit from a fork into the water. Being the expert that I am, I was positive it was going to float. The starter immediately sank like a stone. I couldn’t have been more surprised!

But I think I know now why I pretty much ignored the Float Test in the past. It’s because I thought it was similar to the windowpane test.

I’ve only once performed the windowpane test (and I confess that I conveniently forgot that it actually worked) because it seems that you can tell by looking to know if the gluten has been developed enough. I pretty much agree with what Rose Levy Beranbaum has to say about the windowpane test.

The “windowpane test” used by some bakers entails pulling off a small piece of dough and stretching it: it should not tear, and if held up to the light, it should be translucent. I do not use the windowpane test to determine dough strength because some doughs, such as those containing a lot of seeds, will always tear when stretched. Others […] become extensible at a later stage during rising, which stretches and strengthens the dough, and during pulling, “turning” or folding it over on itself. 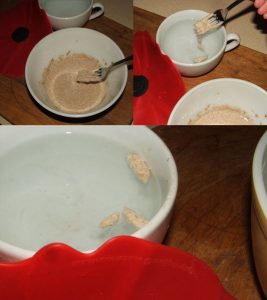 On the other hand, the Float Test is completely different. I now refuse to make bread dough without the starter passing the float test! There have been way too many horrible failures here in the past before I finally retained what I had read about the float test. END_OF_DOCUMENT_TOKEN_TO_BE_REPLACED