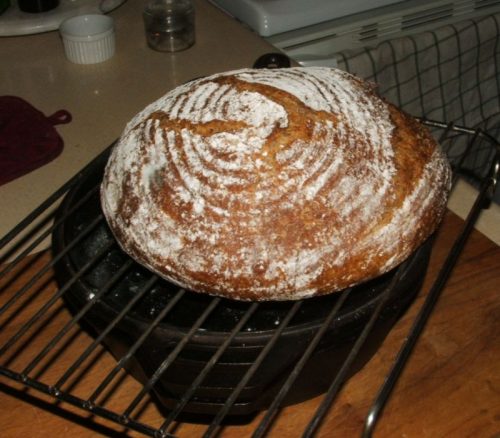 Not long ago, in the BBBabes’ FB group, Scott D mentioned that one of the breads he really likes to make is miso-rye. He wrote, “It’s my favorite toast!”

The mere mention of Miso Rye bread in David Lebovitz’s February 2012 blog entry, Pear-Fennel Soup, got me excited. David linked to Gontran Cherrier’s website, which was where the bread was purchased. Even switching into English on the site didn’t give me much of a clue about what’s in this bread other than the obvious. […] In the end I kind of had to invent my own recipe, taking a little from here and there and settling on a recipe that uses the sourdough starter and yeast. The miso-rye combination is delicious, especially as toast.

– Scott D, Scott_D.com: Miso Rye Bread
I made it a lot over a year. It makes the most delicious toast in the morning.

– Scott D, FB | Bread Baking Babes and Friends, Miso Rye
I’ve been making this bread for a year and a half now and have made a couple of minor changes to the recipe for more consistent results. They are the kind of adjustments a seasoned bread baker would make because they know the consistency that bread should have at the different stages. The metric measurements are all by weight.

We have red miso in the fridge!

Immediately intrigued by the idea of adding miso to bread dough, I started to convert Scott’s updated recipe. END_OF_DOCUMENT_TOKEN_TO_BE_REPLACED