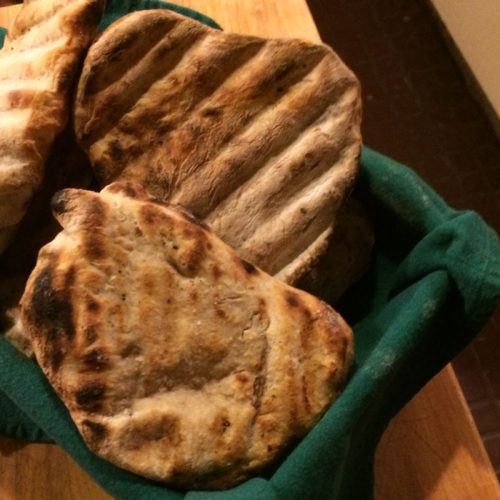 It’s not really surprising that since March, even with the difficulty of getting flour and yeast, there seem to be many more people baking bread. And, probably because of the scarcity of yeast on the store shelves for several weeks, FB’s Sourdough Bread Baking private group is especially active.

This month, it was decided to bake sourdough naan together.

For the group bake this month, I decided to make Naan. Google helped me find a recipe, which, after some slight modifications, produced a pretty good Naan.

We LOVE naan. I decided we’d join in. But I wasn’t crazy about the chosen recipe adapted from breadtopia’s Sourdough Naan Flatbread. It’s probably fine… but there’s {gleeps} no butter in the ingredients list except for “Oil or butter for your rolling pin” and “Optional: Minced garlic and cilantro or other herbs to […] combine with melted butter and brush on the flatbreads after they are cooked…“.

Also – and again, there’s probably nothing wrong with the bread – breadtopia’s naan are round. And, of course I know that naan has been baked throughout Central Asia for centuries. But when we hear the word “naan”, we automatically think of India.
END_OF_DOCUMENT_TOKEN_TO_BE_REPLACED