summary: recipe for Wild Kulcha; playing with the recipe (as usual); once again wildly divergent; because they’re round, eggs are similar to matar (peas), aren’t they? …information about Bread Baking Babes; information about Sourdough September; 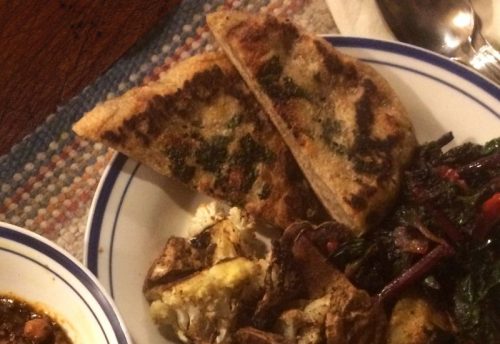 Not long after we were married – way back in the last century, my sister took us to Indiatown to get us our very own thali dishes. She gave us four beautiful stainless steel thalis as well as eight matching katoris (two sizes) to go with them. We LOVE them. We often use the katoris. But the thalis are hidden under the salad bowl. But not THAT hidden.

I really don’t know what possessed us not to bring them out for this month’s BBB kulcha extravaganza.

Yes! Aparna (My Diverse Kitchen) chose not just Indian bread but also offered us wonderful savoury accompaniments for us to prepare this month. Apparently, Matar or Chole Kulcha is a common street food in New Delhi. And I gather kulcha is also often served for breakfast with chole (chickpea curry) in Amritsar.

Set in the interiors of Old Delhi in the labyrinth of tiny passages is a man sitting with an arsenal of masalas around him busy stirring his art in a cauldron surrounded by local crowd relishing every bite of it. He scoops out chole from a copper vessel, tops it with aloo and masala (the red spicy concentration with a choice of less, medium, or “at your own risk”). Then, he adds to it a spoonful of aamchur-chutney, a sprinkle of garam masala and a garnish of hara dhanya (coriander), mooli (white raddish) and finely chopped ginger to top it off, placed along side a pair of fluffy kulcha.

– Ankita Bindal,
NDTV Food | Lotan Chole Kulche: An Old Delhi Delicacy Cherished by Street Food Lovers
Amritsar’s narrow lanes are easily navigated on cycle-rickshaw, but can be extremely confusing for tourists. These lanes contain hidden gems, old stories and most importantly some amazing food. I remember my first trip to Amritsar was in 2011. I went straight to the Golden Temple, saw the amazing beauty of it, had the kada prasad from its massive kitchen and came out into the narrow lanes to explore the essence of Amritsar.
Amritsar is, without doubt, the food capital of Punjab. One of the most famous forms of street food in Amritsar is the Amritsari Kulcha. These are stuffed mashed potatoes inside a naan, cooked till it’s crispy, enjoyed hot with LOTS of butter on top. […] It can simply be cooked on a tawa or a tandoor and perhaps this was the reason it was so famous from masses to classes. Other variants of this have fresh or dry fruits, with meat or gobhi (cauliflower). A modern day version also has soya powder stuffing. Kulchas are also famous in Peshawar, Kashmir and of course saddi Dilli.
The history of kulchas goes back to the Mughals and Nizams. Khansamas during Shah Jahan’s time used to stuff kulchas with vegetables and they made it popular in the darbar. It was so tasty that it became the official bread for breakfast or lunch by the time Shah Jehan took to the throne.

When I asked T about kulcha, he was surprised to report that he didn’t remember ever having seen it or tried it in the ten years he lived in India.

Aparna informed us that kulcha not only contains butter, but is cooked on a bed of butter as well. Did someone say butter? Lots of butter?