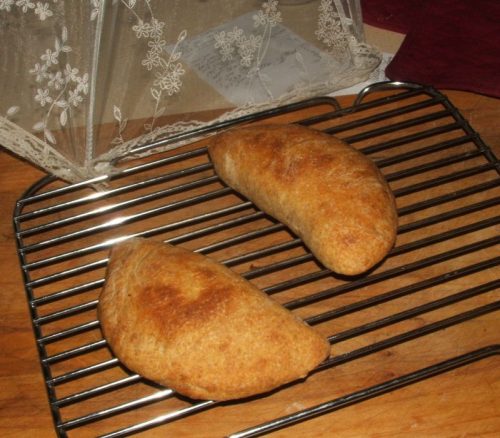 Two nights ago, just before going into a Zoom meeting for work, I baked our wild not-quite Runzas that wildly deviating from the traditional filling. They looked good; they smelled good…. I set them aside until yesterday morning.

But first. Runzas? Bierocks?? What are those?

Most midwesterners never have heard of a runza, but those who have seem to be passionate about them. They’re a regional specialty, showing up in the Plains states, particularly Nebraska, Kansas, Colorado and Iowa. They’re German/Russian in origin, a point which becomes clear when you consider the simple ingredient list for the filling: beef, cabbage and onions. Settlers from the Volga River region brought this treasured recipe with them. According to Jane Palmer, food editor of the Omaha World-Herald, the word runza is a made-up name, coined by the restaurant chain, for what was originally known as a bierock. Recipes abound and they are quite simple to make at home […]

-Pat Dailey, Chicago Tribune | Here’s A Runza Recipe To Bring The Taste Of The Plains Back To, 28 June 1990
The beloved Nebraska meat pocket is a cult classic, yet the Runza sandwich wouldn’t be recognized by the residents of 49 other states. The Runza is a treasure that’s been hundreds of years in the making, with recipes carried to Nebraska by immigrants from Europe. […] The tale of that beloved Nebraska meat pocket — sometimes called a bierock — is […] a treasure hundreds of years in the making, involving broken promises, German immigrants, family recipes and eventually a woman named Sarah “Sally” Everett from Sutton, Nebraska. […] [O]nce a Nebraskan sinks her teeth into one, the recognition is instant: This is a Runza.

-Sarah Baker Hansen, Omaha World Herald | All Hail the Runza, 26 March 2017
Runzas (a.k.a. Bierocks or Krautburgers, among other names) are a pocket sandwich, a puffy, yeasted dough baked around a savory meat filling. They likely originated in Russia in the 1800s, and came to the Midwest with the Volga Germans, a population of German people who lived along the Volga River in southeastern Russia in the 18th century and settled in Nebraska, Kansas, and the Dakotas in the early 20th century.