summary: recipe for Not-Gigi’s Not-Quitade-Hungarian Not-Exactly-Almond Roll, loosely based on the recipe for ‘Gigi’s Almond Roll’ in a back issue of “Sunset Magazine”; if ‘diós bejgli’ is ‘walnut roll’ and ‘makos bejgli’ is ‘poppy seed roll’ in Hungarian, then is ‘mandulás bejgli’ the name for ‘almond roll’?; commercial yeast vs. wild yeast; sweet or savoury? – that is the question – I vote for savoury; information about Bread Baking Babes; 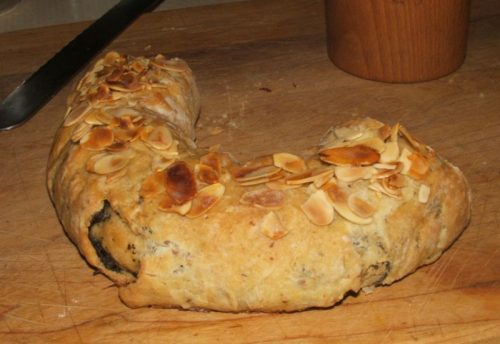 Once again, I hang my head in shame at my lateness. I want to say it wasn’t my fault. I really do. But like George Washington, I cannot tell a lie.

When I told T that the BBBabes’ June project would be quite similar to the povitica we just made, his eyes lit up. Here’s how the conversation went: