summary: recipe for wild pita; baking on the barbecue; storing pita in the – eeeeek!! – fridge; rejuvenating it in the toaster;

While most Israelis assume that the word pita is Arab in origin, it is actually Greek: Arabic has no “p” sound, hence the Arabic speaker’s “bita” for “pita.” The Jews of Salonika spoke Ladino, a mixture of medieval Spanish, Hebrew, and Aramaic, and they adopted the Greek word pita

The private FB group, Sourdough Bread Baking, holds a monthly “GroupBake”. (Anyone can find this FB group, but only members can see who is in the group and what is posted.) This August, the GroupBake just happened to be bread that we have been making all summer long: pita. 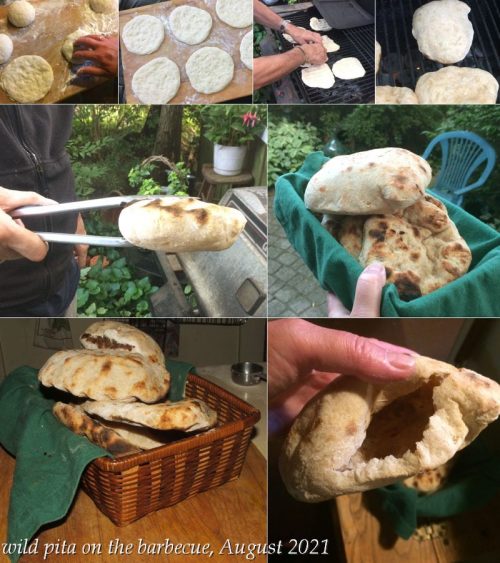 summary: pickled peppers; hot hot hot – but really good; importance of actually reading books that have been given to us; another terrific idea from Barbara Tropp; another brief review of the “China Moon Cookbook”; 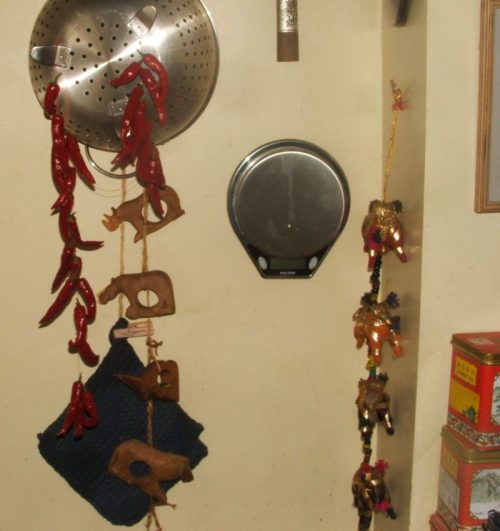 A few weeks ago, we were looking through our cookbooks to see if any of them had ideas for what to do to make a vegetable dish Asian-style. As I was going through the index of Barbara Tropp’s “China Moon Cookbook”, it suddenly occurred to me that we hadn’t really made many things from the book. If any at all.

But it looked like a great book! And intriguing too – written by an opinionated New York Jewish woman. Of course she’s opinionated! Aren’t we all?

We started reading the book. And loved what we were reading.

We immediately started making things from it. And loved what we were eating. And kicked ourselves for waiting so long to delve into this beautiful cookbook.

Thank you again, B, for a lovely Christmas present (for Christmas 2000!!!) We’re so happy we have finally paid proper attention to it.

When we got to the recipe for “Pickled Red Cherry Peppers”, we realized that our search for decent pickled peppers was probably over. END_OF_DOCUMENT_TOKEN_TO_BE_REPLACED

“I can make soup from a stone,” said the man. “You can?” said the woman. “Show me.” -European Folktale

Stone Soup is good. But really, making Stone Soup is so yesterday! This month, we’ve shown that we can make bread with stones…. 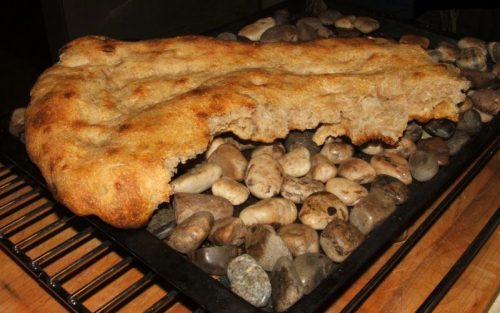 Ha. Did I say that Stone Soup was so yesterday? Pebble Bread is even older!

[Y]easted or unleavened flatbreads are eaten alongside most meals in Iran. You can find breads such as barbari, sangak, lavaash or taftoon in speciality Iranian stores.
[…]
Iranian flatbreads are some of the oldest in the world, their popularity spreading across the Levant and into India, where the locals adopted the Farsi word for bread, ‘naan‘. There are bakeries on every street corner in Iran and people buy freshly baked breads daily to eat with every meal. The most popular kinds are yeasted flatbreads such as naan-e barbari or naan-e sangak, which are baked in a tanoor (a traditional clay oven) in huge pieces, up to a metre long. They are tantalisingly soft and fluffy on the inside, with a firm crust.

– Yasmin Khan, The Saffron Tales, p.23&59
Sangak (‘pebble’) is the diminutive of sang (‘stone’). This bread is called “pebble-bread” because the bottom of the oven in which it is baked is formed by a sloping bank of pebbles, on which the flat cakes of dough are thrown. it is very pleasant to the taste, and the only objection to it is that sometimes a stray pebble gets incorporated in its substance, to the manifest peril of the teeth of the consumer.

– Edward Granville Browne, A Year Amongst the Persians, p.109
Sangyak: […] Top oiled and well-indented with fingertips. Baked in a traditional oven on a bed of hot pebbles, it is a bubbly, crisp flat bread, usually made with wholemeal flour.

– Tess Mallos, Iran : Persian Breads, Complete Middle East Cookbook, p295
There’s a kind of reverence surrounding two of the breads of Iran. One is the classic breakfast bread called barbari, with a ridged browned top, and the other is sangak, the chewy, textured “pebble bread” that most often accompanies lunch and supper. […] The traditional oven of a sangak bakery has a tall, narrow opening and inside the cavern of the oven is a wall of gravel sloping upward toward the back. Sang means stone or pebble in Persian, so sangak refers to bread baked on a bed of stones. […] It’s possible to make reasonable versions of [sangak] […] in a home oven if you have […] a supply of small stones […] If you have a starter going, use it rather than the yeast and lengthen the proofing times as necessary. 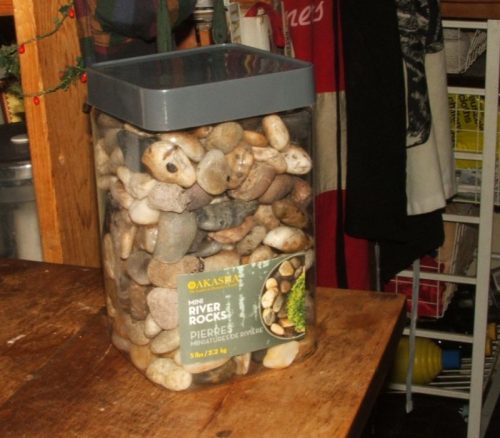 Since getting our river stones last August, we have baked Naan Sangak on our gas barbecue in the summer months, and in the oven over the winter.

I posted about our very first effort last August and it was such a revelation that baking bread on hot stones works so wonderfully!
END_OF_DOCUMENT_TOKEN_TO_BE_REPLACED 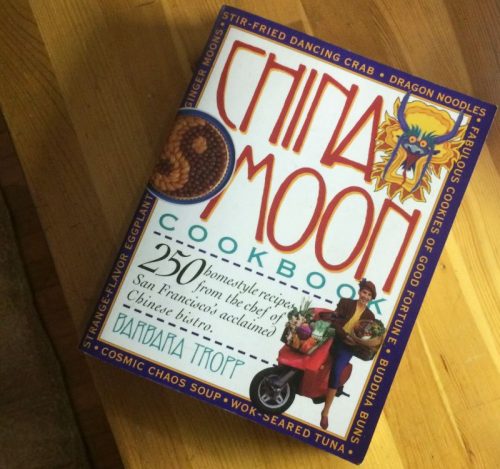 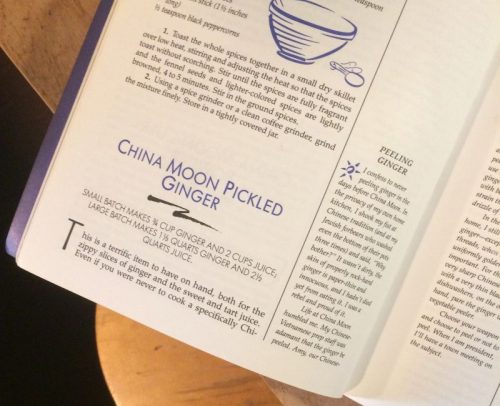 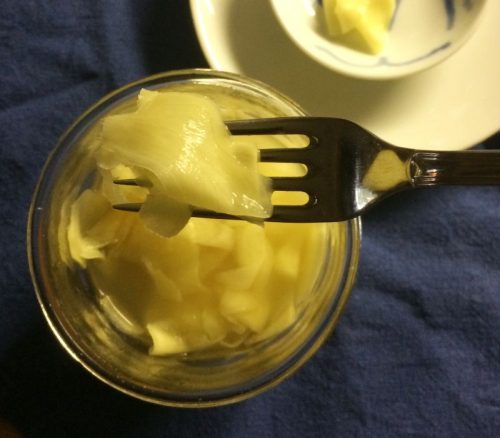 END_OF_DOCUMENT_TOKEN_TO_BE_REPLACED

summary: recipe for Isan-style marinade; still re-reading past issues of SAVEUR magazine (when each SAVEUR magazine was still sensational from cover to cover); finding new -to us- ideas and new – to us – books to read; very brief review of ‘The Apprentice: My Life in the Kitchen’ by Jacques Pépin; why doesn’t everyone butterfly chicken the Isan way? 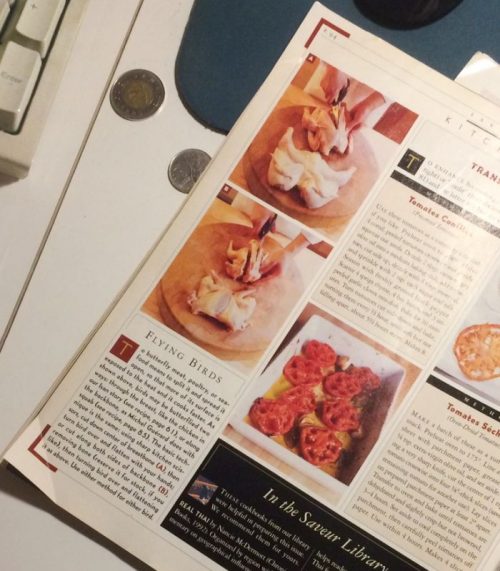 When we first got each of the SAVEUR magazines in our library, we read them cover to cover. As we get them from the shelf to re-read, one by one, we’re amazed at the things we missed. END_OF_DOCUMENT_TOKEN_TO_BE_REPLACED