summary: recipe for Wild Hällakakor; I shouldn’t be so quick to judge; taste and try first; kuskavel or randkavel: do I really need yet another implement in the kitchen? (and, what kind of rolling pin???); …improvisations; meat tenderizers aren’t just for meat; information about Bread Baking Babes;

Taste and try before you… 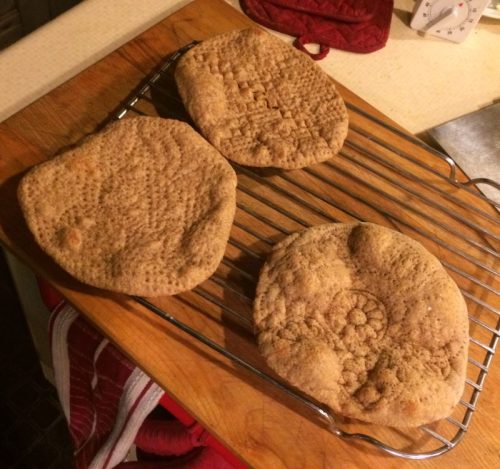 This month, Kelly took the BBBabes to Sweden, deciding we would make Swedish Norrländska hällakaka, which literally translates as “Northern Rural Slab-cakes”). How do I know that? Ha. It’s not exactly thanks to Google Translate alone.

When I was searching on the internet, I came across recipes for tunnbröd, that looked very similar to hällakaka. The word “tunnbröd” translates as “flatbread” in Google Translate. The word “hällakaka” was more problematic for Google Translate; it suggested “pouring cakes”. And, after a little manipulation of “Norrländska” into “Norr ländska”, Google Translate comes up with “Northern rural”.

So, after having only moderate success with Google Translate, I decided to ask Ilva (Ilva Baretta Photography, previously at Lucullian Delights), who is actually Swedish. END_OF_DOCUMENT_TOKEN_TO_BE_REPLACED