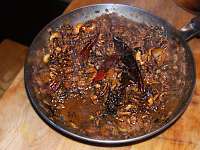 Quick!! There are two things you have to do right now:

Why? You’ve GOT to make this pecan cashew mole! I can’t believe how wonderful it is!

It was the following section in Danielle’s (Habeas Brülée) post that clinched the deal:

When we’re cooking in our tiny Lyceum kitchen, we can’t really hear what’s going on in the big room outside. […] When this mole was served the first time, though, a moment later someone out in the dining room exclaimed with delight so loudly that I could hear it back in the kitchen: “Oh my god, this sauce! There’s so much going on!”

Danielle calls for pecans in the mole. We didn’t have quite enough pecans on hand so we added some cashews. (Do South Americans ever use cashews in moles?? No idea.) Why not? They couldn’t be bad! 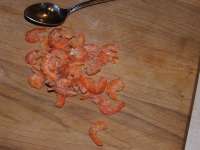 She also calls for “tiny dried shrimp”. Now, we’ve often seen these little dried shrimp (they’re each about 2 cm across) in Chinatown but we’ve never had the nerve to buy them.

They are amazing! Once they’ve been reconstituted they have a wonderful chewy texture. The flavour on its own is, admittedly, a little on the salty fishy side. But once it is introduced to the rest of the ingredients, the fishiness disappears entirely and they just taste like shrimps should.

The shrimps so wonderful that we’re having a quasi puttanesca pasta tonight made with tomatoes, olives and dried shrimp rather than anchovies. Why not? It can’t be bad! But that’s another story….

One thing that isn’t in Danielle’s mole is chocolate. We were very surprised. We thought that chocolate was an essential ingredient in mole. We almost put some in but then decided to see how it tasted without the chocolate, thinking that we could always add chocolate the next time.

And the verdict is in: chocolate is entirely unnecessary in this particular mole.

Here’s what T did to make enough mole for about 4 dinners:

based on Habeas Brülée’s recipe for Pecan Mole

We served this sauce underneath barbecued chicken (rubbed with Old Bay seasoning), greens with garlic and flat bread.

:: We tasted the plantain before cooking it and its flavour was pretty much the same as an underripe banana. It’s highly likely that we could just as easily use greenish banana in place of plantain and next time will get whichever is less expensive.

:: Instead of chicken stock powder, a small amount of rich stock can obviously be used. 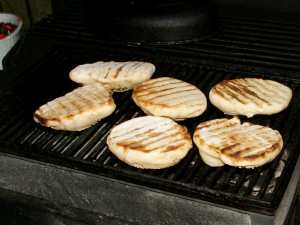 If I’d been paying proper attention to Tanna (My Kitchen in Half Cups), I’d have made gorditas (read more about gorditas (was at mykitcheninhalfcups.com/My_Kitchen_In_Half_Cups...Second_Helping_/My_Kitchen_in_Half_Cups...Second_Helping/Entries/2009/8/16_Gorditas.html)) to go with the chicken and mole. Happily, we had some fat pitas, that we’d barbecued earlier this summer, floating around in the freezer. We tossed them into the barbecue at the last minute to reheat them and they were perfect. 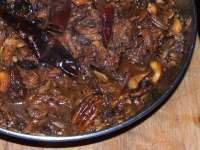 One thing about the sauce. It does look a bit, well… brown and sludgy. (This is the reason that the photo shows the cashews and chiles whole.) We could have taken photos of the final plates but well. You know. We were too busy savouring, lip smacking, licking our fingers and swooning to go and get the camera.

And I suspect that we’re always going to use cashews in the mole. Inexplicably, they are less expensive here than pecans. (Really, it makes zero sense. Isn’t it WAY more labour intensive to harvest cashews than pecans??) Not to mention that cashews lend a wonderful flavour to just about anything they’re in.

We’re thinking that when we serve this to guests, we’ll be certain to place the sauce under the grilled meat and garnish it with coriander leaf, or parsley, or fresh oregano leaves. It really does need something to distract the eye. It’s certainly not the prettiest looking sauce when it’s finished but close your eyes if the sight of it offends you and taste it. Once it goes from fork to mouth, all is forgiven. It might be rather Bflat in looks but in flavour? Oh oh oh: A plus all the way!

RATS!! We meant to fry some plantain to serve it on the side. Oh dear. I guess that means we’ll have to have this mole again very soon. Poor us.

4 responses to “a fabulous mole – what? no chocolate??”