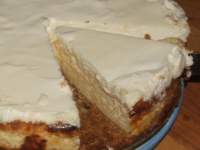 Now, I ask you, is there anything more wonderful than cheesecake? Even storebought cheesecake is good.

But. Homemade cheesecake is so much better. And it’s dead easy to make!

I used to make a lemon cheesecake with a chocolate swirl – with a chocolate wafer crust below. I still love that cheesecake but Someone doesn’t love it so it’s just not worth the effort. The argument? He claims it’s eggy and that the lemon is extraneous.

So we were very excited to see a New York cheesecake recipe when reading the fascinating book, Garlic and Sapphires: The Secret Life of a Critic in Disguise by Ruth Reichl. When I read through the recipe, I got even more excited because Reichl makes two layers – the bottom layer with cream cheese and the top layer with sour cream. Years ago, while we were on a summer course together, one of my housemates made cheesecake like that. It was insanely good; foolishly, I did not ask her for her recipe….

Reichl’s recipe sounded just like my friend’s! (I wonder if it isn’t the same.) At last!! We know how to make cheesecake that both of us think is great – no, not just “great” – let me be so bold as to say it’s the best cheesecake. 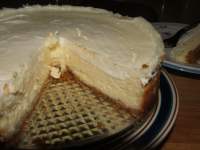 Reichl’s cheesecake doesn’t have any foofy flavours. Still, we were concerned that it might be eggy. So we made a small cake, using our 6 inch springform pan. It was so good that when we had demolished it, we just had to have it again. We still had half a package (125gm) of cream cheese in the fridge and some creamy goat’s cheese so decided to use half cream cheese and half goat’s cheese for the second cake. The result? Equally good. Exactly the same flavour. In future, we will use whichever of the cheeses is less expensive.

Here is our version of Reichl’s “New York Cheesecake”:

edit 3 April 2009: Omit the vanilla; it’s too strong a flavour for the cheesecake.

enough for a 7″ springform pan

Make sure all ingredients are at room temperature.

Reichl suggests that it’s good with fresh berries as a garnish and she’s probably right. So far, we’ve only ever had it as is, unadorned. It really seems like any addition would be like gilding the lily. Even so, when wild blueberries are in season, we might have to try Reichl’s suggestion.

**We have never added lemon zest. But we think it wouldn’t be a bad idea…. 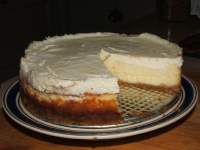 Garlic and Sapphires by Ruth Reichl

This was a recent most satisfying book for our aperitif reading. Even if it hadn’t included this fabulous cheese cake recipe, Garlic and Sapphires by Ruth Reichl is well worth reading. It’s a wonderful view into the life of a food critic, with reminders that it’s not as wonderful a job as some of us might imagine: after all, not every restaurant serves the best food. Not to mention that eating in restaurants all the time can become tiresome.

Reading Reichl’s book reinforced for me that eating at home is so much nicer and, well, homier. Think about it, what kind of restaurant would allow a person to wear her jammies, a housecoat and slippers…?

edit August 2012: We recently examined the bottom of our small springform pan and were amazed to see that it has “7” embossed on the bottom. The manufacturers must have a different ruler though. The pan measures 6.5″….

edit June 2015: We copied Uncle Tetsu‘s idea of separating the eggs. At the last minute, he folded the whipped whites into the batter. The cake rose so high that he wasn’t sure if there would be room for the sour cream layer.

3 responses to “A great read and the best cheesecake…”