In 2008, Tanna (My Kitchen in Half Cups) wrote the following to the BBBabes:

After such a great conquest of all those crocs my Babes, I say we need a Pizza Party!! Bring ’em on. And let’s don’t forget the beer and wine. Misc. drinks allowed.

This recipe is for two pizzas. I hope everybody tries one with the topping of potatoes as given here. I can just about promise you will be pleasantly surprised. When I did this sometime late last summer, I thought the potatoes changed and became almost cheese like.

All the recipes in this book are based on breads from American Artisan Bakeries. This one is from Sullivan Street Bakery in So-Ho of New York City.

The dough will make two small or one medium (half-sheet pan 18×13 inches) and can be divided and retarded in the fridge.

Glezer describes the pizza as “unlike traditional . . . more like a very thin-crusted tart heaped with golden waves of potatoes, onions, rosemary and olive oil.”

The aim is an 11.5% protein flour achieved by a mix of half bread flour and unbleached all-purpose or all King Arthur all-purpose (which is what the bakery uses).

In a stand mixer on low speed with paddle, slowly add water to the flour. Increase the speed to medium and beat until it clears the sides of the bowl and as was said of the croc it will come together. In about 20 minutes, mine took about 15, I had a smooth but very liquid dough.

Allow to rise covered until very light. Mine did take the 4 hours.

Coat the pan very generously with olive oil. I did that. Gave it three times (10 minutes each) to relax and was not able to get the dough to stretch to the corners. Lien suggest not oiling the corners and got hers to fill the pan.

Allow the dough to rise covered about an hour. It should rise about half.

I preheat my oven for at least an hour with the baking stone/tiles in it.

Slice potatoes as thin as possible (I used a mandoline but a food processor would work as would a chef’s knife and good knife skills). Toss the potato slices with salt and allow 10 minutes for the salt to pull out their water. I then sandwiched the slices between two towels to dry them which I believe removed salt with the water.

Spread on the topping to the edges.
Drizzle olive oil over and salt if you think it needs more.
Bake 40 to 50 minutes: the onions & potatoes should be brown and crusty in places. 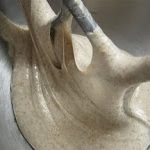 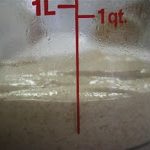 The start of the rise 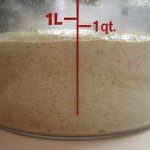 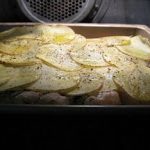 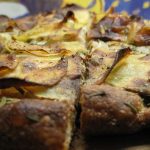 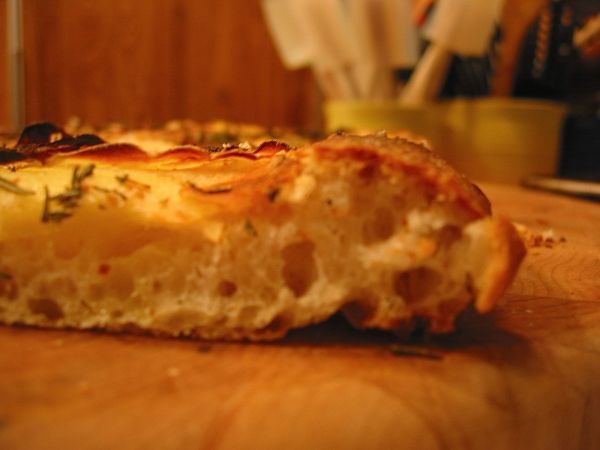 – Tanna (My Kitchen in Half Cups)

Please take a look at the other BBBabes potato pizzas: