Im not sure how I came up with the idea of making black bread when it was my turn to host the months Bread Baking Babes session, but Im happy that I did this is a strange bread indeed, but good, you should really try it!

First I have to say that Im not sure if Ive ever eaten genuine Russian black bread. According to my husband and some other sources, the real thing can be used to drive nails into wood. It was not my wish to take it to that extreme, and most of the recipes I have looked at seem to be of the same opinion.

When I searched the internet for recipes I found quite a few of which some claimed to have its origin in Latvia, Lithuania, Estonia, Belarus, Finland and Åland Islands as well as Russia. Many of the recipes included coffee and/or old bread or bread crumbs, all of them included rye but not necessarily rye alone. One recipe (Ruth Henspergers) even included chocolate.

It was this last recipe that caught my attention, and I soon had ordered the book The Bread Bible which featured the bread. Thanks to Tanna of My Kitchen in Half Cups I didnt have to wait for the book to be delivered, she scanned the recipe and sent it along with a couple of others. Which meant I that I was forced to CHOOSE and make DECISIONS. I dont know about you, but I always get the feeling that I end up with the inferior choices, so I had to test bake.

Which Im glad that I did, its not often that I bake similar things very close in time, but when I do, I always seem to learn something.

So first I baked Ruth Henspergers Black Bread from The Bread Bible. Lots of ingredients, including chocolate and instant espresso powder, but quite a quick bake, using only commercial yeast it was ready in an afternoon. Everybody liked it, it had a lot of taste and sweetness, but after a while I found it a little ingratiating, too eager to please so to speak, and it lacked that depth that bread made with sourdough and/or long fermentation time has.

The next bread I tried was Black Bread from Bread: A Baker’s Book of Techniques and Recipes by Jeffrey Hamelman. With no chocolate in sight, no spices and no sweetener, but ordinary ground coffee, old bread, and sourdough, this bread was quite the opposite to Henspergers rough and almost acrid.

To make a long story short, I finally made a combination of the two recipes and was quite pleased with the result. It has the spices and some of the sweetness, but also a little bite and a sour note. 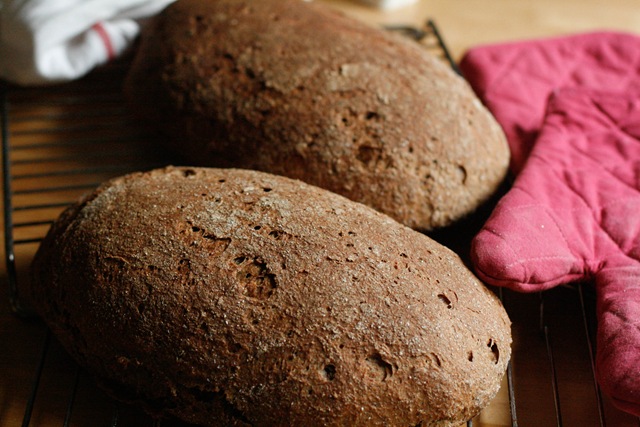 * If you dont have any active starter at hand, I think you can cheat by using a small amount (say 5 g fresh or 0,5 tsp instant dry yeast) instead.

** I used rye sourdough bread, but I guess any old unsweetened bread will do, or any old bread in general. 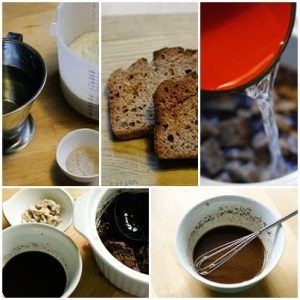 Mix the ingredients to the sourdough, cover the container with plastic and leave for 1214 hours at room temperature.

Toast the old bread in a toaster or in the oven. The bread should be browned, but absolutely not blackened. Dice the bread or just tear it in pieces and put it in a bowl. Add the rest of the soaker ingredients except the water. Heat the water to near boiling and pour over the soaker ingredients. Cover and leave for the same duration as the sourdough. 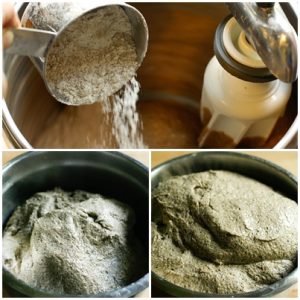 Mix the two flours in a separate bowl.

If using fresh yeast: Take a small amount of the soaker liquid and dissolve the yeast in it.

Add the yeast mixture OR the instant dry yeast, soaker, sourdough and salt to a mixing bowl.

Place the dough in an oiled container, cover with plastic and leave for 23 hours or until doubled in size. 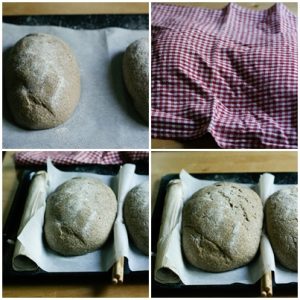 Divide the dough in two and shape the parts into oblong loaves. (I placed them on parchment paper to make it possible to just slide the loaves into the oven.) Stretch the surface using both hands to get a tight loaf. Use more rye if the dough is too sticky to handle.

Cover with a tea towel and leave for 60 minutes. Dont over-proof! (Fire up the oven after 30 minutes to have it ready.)

Place an empty metal container in the bottom of the oven. Put in your baking stone or an empty baking sheet. Heat the oven to 225 C/435 F.

Move the loaves to the hot stone or sheet. Bake for 10 minutes.

Open the oven door to vent out some moist. At the same time, lower the temp. to 200 C/400 F. Bake another 30-40 minutes or until they sound hollow when tapped underneath, or when the inner temperature has reached appr. 97 C/207 F.

Let the loaves cool down before you slice them. Eat with butter and maybe some sharp cheese, or why not cured salmon. […]