summary: pancakes; cast-iron is the ultimate no-stick material, great ideas from FlatBreads and Flavors by Jeffrey Alford and Naomi Duguid; a little bit about sorghum flour (aka juwar, jowar); (click on image(s) to see larger views and more photos)

Our current read-aloud book is the wonderful cookbook/travelogue “Flatbreads and Flavors” by Jeffrey Alford and Naomi Duguid. Not long ago we read about the San’a sorghum bread, kutma:

These sorghum breads come from Yemen, where sorghum is the major cereal crop. The breads are large soft rolls with a good crust and pleasing mixed-grain flavour. […] [T]hey are delicious eaten on their own or as part of virtually any bread and soup combination. 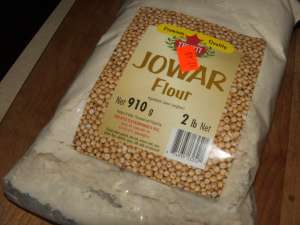 I’ve heard of sorghum, of course. I’ve even seen it growing. We saw fields and fields of the beautiful brick red grain waving lazily in the breeze on one of our idyllic French bicycle holidays through the Aquitaine. We wondered what the grain was and finally learned from a fellow that it was “sorghum”. Ah yes!! I remember nodding in reply, as if to say, “of course, how could I have had to ask?”

It turns out that in spite of what I may have heard, sorghum IS grown for people to eat. Or at least, it is in places other than North America. Here in North America, it is indeed grown but primarily as fodder for livestock.

Sorghum is one of the world’s most commonly eaten grains. […] In several different instances in Turkmenistan, in Central Asia, we were told that a small amount of sorghum flowur should be added to any wheat flour dough to help improve the taste and texture of the bread. […] We’ve recently been able to find sorghum flour in a well-stocked Indian grocery under its Hindi name, juwar, although the first time we took it up to the cashier, he shook his head and told that we didn’t want to buy it: “It’s poor people’s food,” he said, “you won’t like it.”

After reading this, T announced that we were going to buy some juwar at the Indian grocery store that day and make pancakes the next morning. Who was I to argue?

I confess that I was afraid to try it. And silly me. I was concerned that it would be just a little too whole-grain and granola tasting. (You know what I mean. I thought that if we started eating it, we’d also have to start wearing homespun tie-dyed shirts, mismatching long multicoloured cotton skirts, heavy wool socks and birkenstock sandals.) 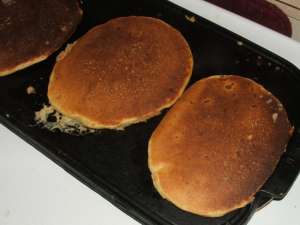 Because Duguid and Alford’s kutma recipe called for a half and half mix of wheat and sorghum flours, we decided to make pancakes with half all-purpose and half sorghum flours (aka jowar).

We used our lovely cast-iron griddle to cook the pancakes. Without any added oil. Cast-iron really is the ultimate no-stick material! 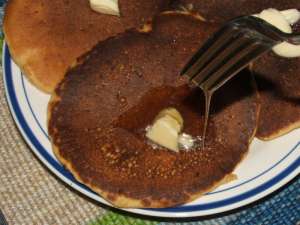 What am I saying? They were fabulous. And I didn’t have to go rifling through the ski-sock drawer or dash to the hardware store to get some dye to quickly make some tie-dyed shirts either.

They were, in fact, the best pancakes we’ve ever made: light and fluffy and fantastic with butter and honey. (T declined to try them with honey, insisting that butter and maple syrup was better.)

They were so good that we had them again this morning.

Because T is allergic to reading recipes and/or measuring, today he forgot to put oil in the pancake batter. And it made not one whit of difference! They didn’t stick to our cast-iron griddle (ungreased). And they were just as wonderful as the other day.

Hmmmm, I wonder if we should have them again for breakfast tomorrow….

Recipe? You think there’s a recipe?

T spurns recipes these days and merely whisked together an egg, some flours, some yoghurt, a little salt and a little sugar in a bowl, adding a little milk til the batter was the consistency of pancake batter.

But if you really want a recipe, the following are some of the pancake/waffle recipes that I use when I make pancakes. (Yes, it’s true. I like to measure.)

I cannot believe how many times we’ve had pancakes in the last few weeks! Please please please do not report us. We will simply claim that what we have given up for Lent is following the rules.

Sorghum flour (also known as sweet sorghum or jowar) makes an excellent wheat flour substitute in quick-leavened baked goods such as muffins or banana bread. It is ground from the small, millet-like grains of the sorghum plant (used to make sorghum syrup). Sweet white sorghum flour is a pale pinkish-brown in color and has a pleasant, faintly sweet and grassy taste.

Sorghum Flour, a millet-like grain, is America’s third leading cereal crop. It is a powerhouse of nutrition and adds a superb flavor to gluten-free baking. Add 15% to 20% sorghum flour to your flour mixes to make delicious breads, cakes, and cookies.

Sorghum is a genus of numerous species of grasses, one of which is raised for grain and many of which are used as fodder plants either cultivated or as part of pasture. […] Other names include Durra, Egyptian Millet, Feterita, Guinea Corn (Africa), Jwari, Jowar (India), Juwar, Milo (Spain), Kaolian (China), Shallu, Sudan Grass, Jondle (Maharashtra), Cholam(TamilNadu), Jola, Jonnalu, Gaoliang, Great Millet, Kafir Corn (Africa), Dura, Dari, Mtama, and Solam. […] Sorghum has been, for centuries, one of the most important staple foods for millions of poor rural people in the semi-arid tropics of Asia and Africa. For some impoverished regions of the world, sorghum remains a principal source of energy, protein, vitamins and minerals.

Sorghum [S. bicolor (L.) Moench] […] is grown in over 66 countries and ranks fifth among the most important cereal crops of the world. It is used for unleavened breads, boiled porridge, malted beverages, and specialty foods such as popped grain. Syrup can be made from sweet sorghum. Sorghum grain is gluten free and is a safe food for gluten allergy sufferers. […] Though sorghum is used largely for livestock in the west, it is an important cereal in the world’s human diet for over 300 million people. Major food consumers are India, Nigeria and other sub-Saharan African countries.

Speaking of sorghum, kutma dough is rising now. We’re going to have kutma for dinner tonight with Lentil soup and salad. So far, I’m thrilled. The dough is silky, light and airy.