summary: Ajvar, a Macedonian staple; staying at home – still; making homemade Ajvar is easy; Ajvar goes with just about everything; Bullhorn peppers?? Canadian substitute for ajvar peppers; where are the shepherd peppers when we need them?

[Ajvar is] so old in fact, it was a favorite of Alexander the Great
– tasteatlas.com | Ajvar 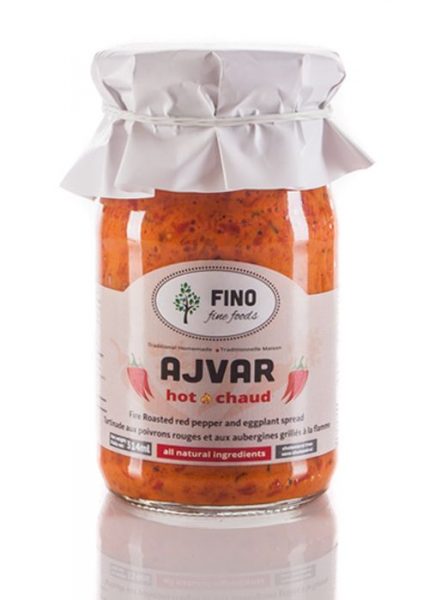 Back in the days (was that just 4 months ago?) when we were maskless, still travelling freely, and I was driving about 140 km east every Wednesday for evening PSO rehearsals, the concert master frequently got a ride with me. Because the traffic was generally pretty horrible gridlock – I sure don’t miss that! – we had to leave at 4pm to get there for our 7:30pm rehearsal.

Sometimes though, traffic would be clear and we would arrive at 6:30pm instead of 7:00pm…. On one of those occasions, I hesitantly asked V if she would mind if we stopped at the Freshco so I could stock up on flour because we were going to run out. Here’s how the conversation went:

She: Mind?? No! I LOVE grocery shopping! [getting her iPhone out and pressing buttons] Let me just see if there are any special deals…
Me: Thank you!! When we go in, do we have to be efficient? Or can we sort of wander through?
She: Wander through?! No! Let’s be efficient and go systematically through every aisle so we don’t miss anything….

When we reached the condiments aisle, V (who is of Macedonian descent) started bouncing up and down. “They have more than one kind of ajvar!!” Then she proceeded to examine each kind – ingredients lists and looks – and decreed that the Fino brand looked correct.

Well, I’d never had ajvar before. V insisted she had to buy a jar. She pressed me to buy a jar too. She said I neeeeeeeeeeded to try it, even though it was red ajvar rather than her preferred green ajvar that her aunt makes in huge quantities and sends to the whole family.

V told me that her favourite way to eat ajvar is on thinly sliced toast with feta cheese (Macedonian feta, of course).

The next morning, we tried the ajvar on toast, spreading butter first (because we’re disgraceful), then adding a bit of creamy goat’s cheese (because we don’t have any feta of any nationality on hand), then a generous slather of ajvar. Delicious!!! We loved it! We were so happy that V made me buy it!

In a very short time, all the ajvar was gone. And suddenly, we were locked down. For a few weeks, ajvar slipped what’s left of my mind…. (Thank goodness I had gotten flour at the same time. The next week was when pretty much all flour disappeared from every supermarket shelf!)

Then in late June, with only the wonderful memory of ajvar, and finding only giant-sized jars of just one brand at our supermarket (the brand that V had turned her nose up at), I took the plunge to make ajvar myself. Even though it wasn’t exactly red pepper season. I scoured the internet for clues on how to proceed.

This traditional peppers-and-eggplant relish is one of the most popular condiments all over the Balkans and Eastern Europe. […]
Ajvar is made with red bull horn pepper, hot pepper, eggplant, and garlic; all in variable amounts, depending on personal taste. Before being mashed together into a chunky paste, the vegetables are typically roasted over a wood fire which imparts a pleasing smokiness to this sweet but tangy relish, making it the perfect accompaniment to grilled meats.

tasteatlas.com: Ajvar (Ajвар)
Uz sve postojece recepte i varijacije ovo je stara receptura koju sam cuo od jednog starog Makedonca koji tvrdi da se tako radilo u njegovoj familiji zadnjih ni on sam nezna koliko pokoljenja. I naravno tvrdi da je jedini ispravan nacin za pripremiti “pravi” ajvar. Tako da sam ga i ja prihvatio kao orginalan jer ima pokrice, a i stvarno boljeg nisam jeo. [With all the existing recipes and variations, this is an old recipe that I heard from an old Macedonian who claims that this is how it was done in his last family, and he himself does not know how many generations. And of course he claims that the only right way to prepare “real” ajvar. So I also accepted it as original because it has cover, and I really haven’t eaten a better one.]

There were many to choose from, but this is the recipe I followed(ish):

I have to say that I was pretty impressed with myself!

Because I only wanted to make enough for one jar, I had to guess about how many peppers and eggplant to use. Not to mention how much oil…. The result was pretty good, but not the best in the world. It needed more pepper and less oil (silly me, I followed the resident expert’s advice, instead of doing what I thought would be right). Still, it was definitely edible and I think Macedonians who hadn’t been in Macedonia for 50 years or so might think it was vaguely similar to what their old aunt, who wasn’t the greatest cook but they loved her just the same, would have made.

I added lemon juice at the last minute to account for too much oil.

I THOUGHT I took photos that night, but we’re having problems with our digital camera – like us, it is aging. Unlike us, it is a planned obsolescent premature aging, although I’m sure the manufacturers would argue vociferously with us that it has lasted far longer than normal. (When we recharge the batteries, we have to reset the date; the default
year is 2004….)

The following were taken the next morning with my sister’s discarded iPhone, so no closeup of the ajvar in a little bowl. 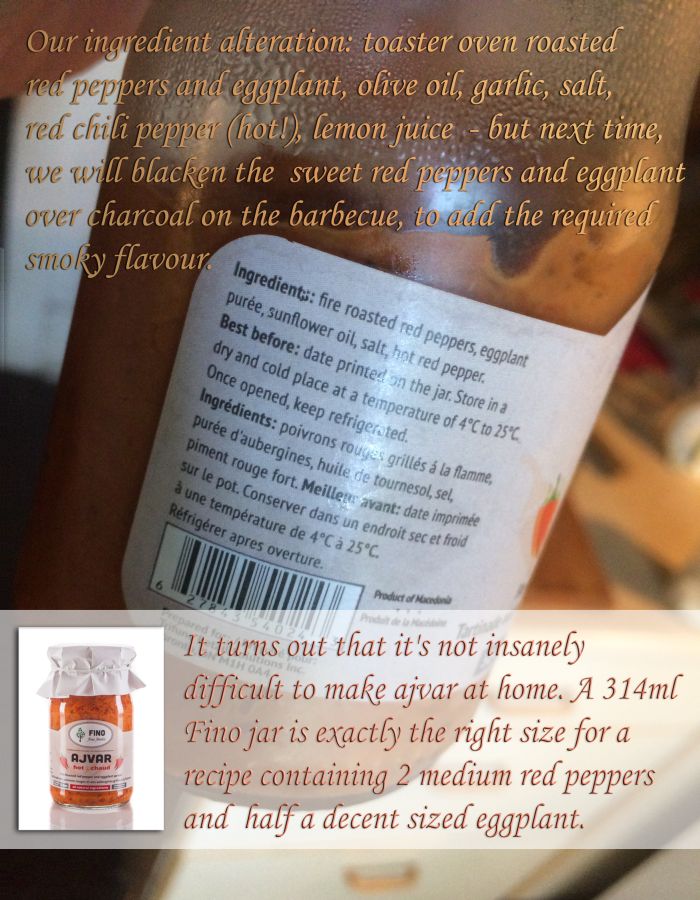 It was really not difficult to make with the toaster oven. Although, next time we have our little
charcoal grill fired up, I’m going to force T to make room on it for me to fire-roast eggplant and red peppers so we can get the smoky flavour. 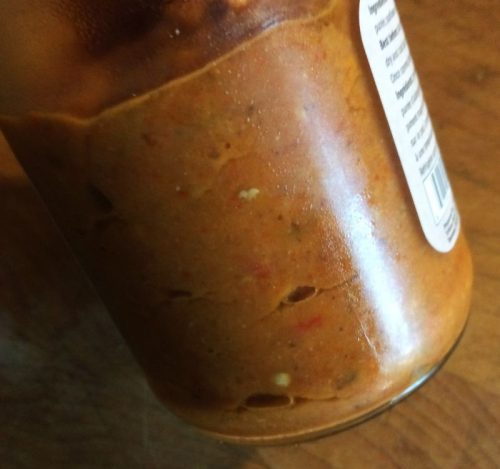 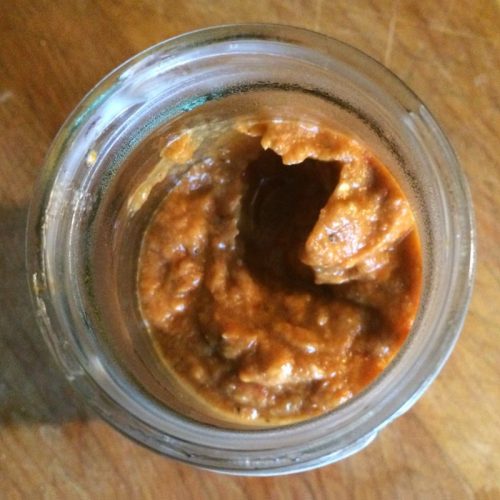 The only sad thing about the home-made ajvar was that T likes it. Which means I couldn’t hoard it all for myself….

If we had a gas stove, instead of using the toaster oven, I would have blackened the peppers on the stove. I used a regular red pepper and half a red shepherd pepper (Capsicum annuum).

I see from googling that the pepper used in Macedonia is Kurtovska kapija, aka kapija roga, aka horned pepper.

“Kurtovska kapija” is mostly heart-shaped, and not bigger than a female palm. Of course, not all of them are the same, there are many curved ones, or those three-sided, but most of them are flat and heart-shaped.

– Verica Zivkovic, Ajvar.com | “Kurtovska Kapija” – Irreplaceable Heart-Shaped Red Pepper
In the late-summer months of August, September and early October, clouds of rich, intense smoke can be seen billowing from every garden and spare space of land across the country

– Amuse: The Story of Ajvar | The Macedonian Dish That’s Set to be the Next Hummus

I asked V which peppers her family uses; she replied: “I don’t think bell peppers are used much in anything except maybe stuffed peppers and even then, not usually. Ajvar is usually banana or shepherds as far as I can tell…”.

The next time I made it, there were no shepherd peppers to be seen. Instead, I used more regular red pepper and less eggplant. And I was able to omit the lemon juice. The resulting ajvar was even more delicious! 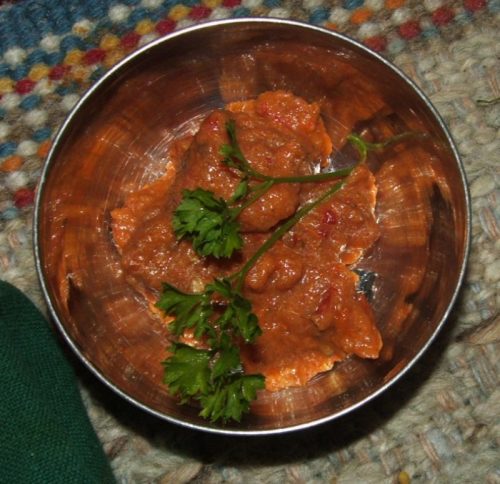 Now I can’t wait for Shepherd pepper season to arrive! And when the very short 2-week-or-so season of hot Shepherd peppers arrives in September, I will be in heaven.

Watch for smoke coming out of our back garden!

Many thanks to V for the introduction to this most wonderful concoction.

Ajvar is great on everything!

Description
Ajvar – (pronounced “i-var”) is one of the most common foods in Macedonia whose origins of this relish are from the same region. […] Used as a dip/spread similar to hummus and baba ghanoush. Spread on a slice of bread or enjoyed with pasta and feta cheese. It is also a side dish served as an alternative or addition to any vegetable. It is a traditional roasted pepper mixture sometimes referred to as vegetarian caviar.

One day, T made spaghettini with toasted cayenne chilis, garlic, and cubes of mozzarella. A spoonful of our ajvar was the perfect garnish! 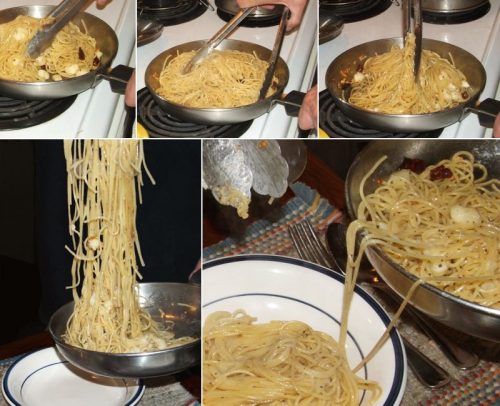 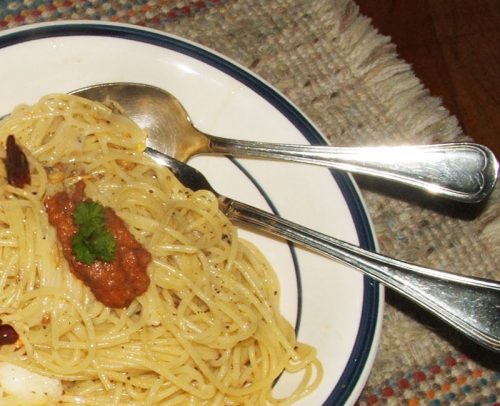 A Canadian Replacement for Kurtovska Kapija?

Chervena Chushka looks a lot like Red Shepherd, only smaller. […] While this pepper is widely circulated under the name Chervena Chushka, apparently this is simply the Bulgarian for “Red Pepper”. Michigan Heirlooms suggests that the correct name for this variety is Kapija, which in turns suggests that its origin is perhaps Serbian, or Croatian, rather then Bulgarian, since Kapija seems to mean “Gate” in both those languages. However; for most of us that is a pretty fine distinction. Let’s just say it’s from the Balkans.
Either way, it’s a really terrific pepper, good raw or roasted. I used mine to make Ajvar this year, and that would certainly be a typical use for these.

Hmmmm… Forget planting zucchini! I know what I want to try growing behind the garage next year!

In Macedonia in late summer apparently the smell of roasting peppers is everywhere as people are putting up ajvar. Actually I roast [peppers] right on the burner of my stove as aromatherapy. (It’s a childhood memory trigger, very nice)