summary: how hard is it (really) to make garlic paste? – Epicurious video investigation; fake news; what to do with garlic paste; the wonders of alioli made with home-grown “Music” garlic; Catalan potatoes; some opinions about garlic; 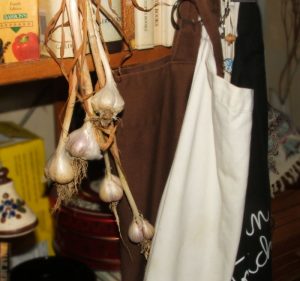 Can you smell the music? I can!! Everything is all right….

I first saw the following video on “Facebook Watch” on 13 August; it conveniently (for FB) left out the plug for the Epicurious website. It turns out the video was originally on the Epicurious YouTube channel on 2 January of this year (at least I think it was originally there), with the words,

The video is also on the epicurious website with the title “Basic Skills Challenge”: https://video.epicurious.com/watch/50-people-try-to-make-garlic-paste

(Shame on FB for not giving credit where credit is due.)

The video got me thinking. I began to wonder how they chose the 50 people. Did they perhaps have to say that the closest they had been to a kitchen was to sit in an open concept restaurant? However the choices were made, it really does feel as though they’ve cooked the books. Surely this can be considered to be fake news, implying that such a high percentage of people are clueless about how to make garlic paste.

And then I became more curious. Why does anyone need to make garlic paste in the first place? What’s wrong with just slicing it thinly?

So I asked my little FB community – unlike others, I do not have zillions of FB friends….

One of my sisters reported that she uses garlic paste in vinaigrette. Katie (Thyme for Cooking) had an even more interesting way (for us) to use garlic paste: in allioli.

One of the things I miss about Andorra is the Festa Major. […] Of all the fantastic food I have eaten all over Europe, I still think about that damn white van selling chips/pommes frites/French fries. They were good. Seriously good. The best chips I have eaten, ever; before or since. You could get them 4 ways: Plain; American (with ketchup); French (with mayonnaise); or Spanish (with allioli).

Real allioli. The kind that takes your breath away; keeps whoever is in the room with you awake all night; puts hair on your chest and knocks your socks off. […] Real allioli is not garlic mayonnaise. It does not have lemon, vinegar or egg yolks. It has garlic, olive oil and a bit of sea salt; nothing more.

She then goes on to describe how to make “Grilled Potatoes with Allioli”. Katie said that she brushed her teeth “and tongue twice before bed. The dogs left the room“. 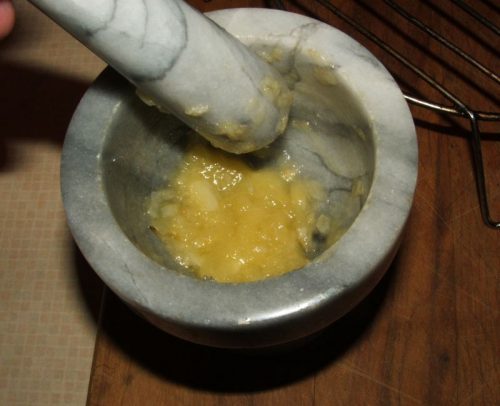 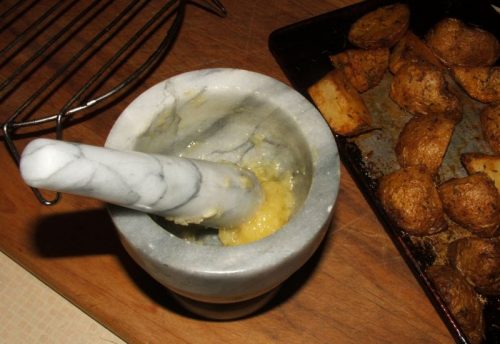 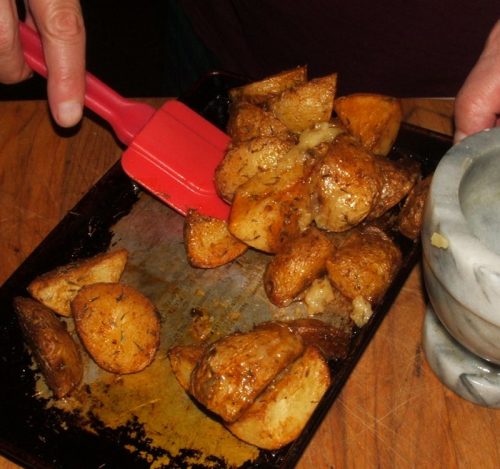 Using the pestle and mortar style of creating garlic paste, we tried this wondrous combination of potatoes and garlic the other night. I confess that we didn’t use Epicurious’ preferred method for making garlic paste. We don’t want our board to reek of garlic….

For the dish, we used unpeeled P.E.I. white potatoes, and garlic from our garden: sharp, hot, sweet, still fresh “Music” garlic, harvested a couple of weeks ago.

We also didn’t follow Katie’s recipe exactly. Instead of grilling them in the barbecue, we oven-roasted the potatoes on a tray (in the toaster oven) with olive oil, dried thyme, and paprika. When the potatoes were done, we did NOT drain off any of the extra oil and simply coated the hot potatoes with the allioli.

These. Catalan. Potatoes. Were. Fabulous.

In fact, they really were insanely delicious! I particularly liked how crispy they were. And lemony. Even though there was no lemon in them at all.

We garnished them with parsley from the garden. As if the parsley would work to take away the pungent scent.

Hahahahaha! We brushed our teeth twice that night too. But I bet the whole neighbourhood can smell the garlic still oozing out of us.

These Catalan potatoes remind me of another Spanish potato dish that we read about years ago, and amazingly, keep forgetting to make. (Maybe it hasn’t been hot enough outside….)

It was August, a punishingly hot month that year, and, arriving on the bus at Orgiva, I picked my way out of town along an almost dry riverbed […] I made a meal out of crossing the river below the farm, drenching myself from head to foot in cool water before climbing towards the house to find Romero. I had written to him, telling him I wanted to spend a month on the farm learning whatever he could teach me about it […] As I climbed across the last terrace where the horses were tethered short in the shade of olive trees, I heard a familiar voice croaking out a song from the house. There was Romero sitting on his terrace, […] He got up and lumbered towards me with a big grin. […]
‘It’s good to be here, Pedro,’ I panted wiping away the sweat that drenched my face.
‘It’s good that you’ve come […] Come on in, I’m just making lunch.’
We ducked our heads and passed through a doorway into the gloom. It was cooler in the tiny dark room, despite a fire blazing on the hearthstone. The air outside was simmering around forty degrees as we pulled two low chairs up to the flames. I watched as Pedro dazzled me with his artistry in the preparation of the staple fare, papas a lo pobre – ‘poor man’s potatoes’.
First he put a deep frying-pan, hideously greasy and blackened, onto a tripod over the flames and into it poured what I judged to be two coffee-cupfuls (after-dinner size) of olive oil. Then with his pocket knife he hacked up a couple of onions, without being too delicate in the matter of peeling them. As they fizzled gladly in the oil, he pulled to pieces a whole head of garlic and tossed the lot into the pan.
‘Don’t you peel the cloves?’ I asked.
‘Lord no! if you don’t peel them they don’t burn, and they keep their flavour better. Less work too.’
He’s right as a matter of fact.
He then took a bucket in which were potatoes hygienically swimming in water; these he had peeled. Squatting over the fire sweat pouring from his huge body, he chopped them roughly – great coarse chips, straight into the spitting oil. When the pan was brimful he stirred it about a bit with a stick and added some twigs to the fire for a better blaze. In a basket hanging from a pole were green and red peppers. Taking five or six small ones, he again tossed them in whole.
‘Right, that can look after itself for a bit now,’ said Pedro, giving it a quick stir, and proceeded to the laying of the table. A wobbly wooden cable drum stood on the terrace. Upon this he placed an old fish-tin which he filled with a huge fistful of olives and a dozen pickled chili peppers. From a paper sack he took a round loaf of bread like a river-stone and cut it into quarters, returning two to the sack. Then he put two bent forks and two tumblers on the table and went to check the main dish. I sat down and poured wine from the plastic bottle and ate an olive – pickled with lots of garlic, lots of salt and a little less of thyme, lavender and heaven knows what else. A swig of the thick brown wine washed it down. […]
Pedro emerged grinning with the sizzling pan which he plonked onto a tile carefully placed to prevent it staining the cable drum […] The food was delicious. I did a lot of cooking that month and it was almost always papas a lo pobre, which Pedro favoured for breakfast, lunch and supper, each time with the statutory two glasses of wine.
…………
[…] [N]ow not only was the sun burning fiercely from high in the sky, but all the hills and rocks were giving back as good as they had got and radiating heat vengefully back into the air. The air, sandwiched between its tormentors, had given up and lay draped over the valley like a rag.
Accustoming my eyes to the glare, I leaned over the terrace and spotted Pedro sitting motionless on his horse down by the river, surrounded by his little group of acolytes. He was singing.
Somewhere in the valley a frog was singing
Polish up my fine crystal glasses . . .

– Chris Stewart, Driving Over Lemons: An Optimist in Andalucia, p25-29

Garlic is divine. Few food items can taste so many distinct ways, handled correctly. Misuse of garlic is a crime. Old garlic, burnt garlic, garlic cut too long ago and garlic that has been tragically smashed through one of those abominations, the garlic press, are all disgusting. Please treat your garlic with respect. Sliver it for pasta, like you saw in Goodfellas; don’t burn it. Smash it, with the flat of your knife blade if you like, but don’t put it through a press. […] Too lazy to peel fresh? You don’t deserve to eat garlic. – Anthony Bourdain (1956-2018), Kitchen Confidential: Adventures in the Culinary Underbelly
It is not really an exaggeration to say that peace and happiness begin geographically, where garlic is used in cooking. – X. Marcel Boulestin (1878-1943),

2 responses to “This is Our Kind of Music!”