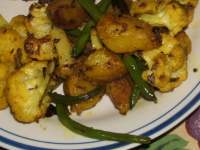 One of my favourite vegetable dishes is aloo gobi (potatoes and cauliflower). Not long ago, we saw the most spectacular looking cauliflower at the farmer’s market downtown. We had to buy it…

And T made the best aloo gobi with it to go with naan (made on the barbecue), rogan josh and beet salad. We had a few green beans left from the night before, so he threw those into the cauliflower as well. What a brilliant dinner!

Cauliflower is one of my favourite vegetables. I adore it steamed and sprinkled with grated cheddar just before serving. And I adore it au gratin as well, with a beautiful golden crispy topping. But I think I adore it most Indian-style. In spite of the chilis, it is not a hot dish. And even though I’m not the biggest fan of turmeric, in aloo gobi, the turmeric is absolutely essential. The dish just wouldn’t work without it. It would not only taste wrong, it would look wrong. 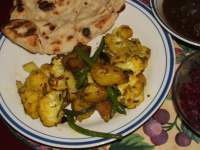 Turmeric makes the cauliflower look lovely too! (Just make sure you serve the plates on a patterned cloth. Then when you spill, the yellow stain won’t be quite so noticeable. :-))

Here’s what T did to make the cauliflower: 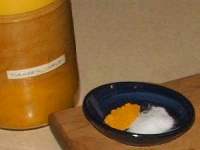 Turmeric roots can be found in Asian supermarkets and powdered turmeric can be found just about anywhere. But the powdered version does get more bitter as it gets older so if you can, get your turmeric in an Indian shop, where the turmeric turn over is high.

Apparently, powdered turmeric is made by boiling turmeric roots, then drying them before grinding them to a powder. Fresh turmeric looks a bit like gnarled brown fingers. But if the root is broken, the bright orange flesh inside is revealed.

I used to think that turmeric was only used for colouring rather than any actual flavouring (as far as I can tell, it only has a somewhat earthy flavour with a hint of carrot). And judging from the following advice from The Cook’s Thesaurus, others have the same idea.

I would NEVER use saffron as a substitute for turmeric. The two are worlds apart in flavour. And if it’s only the colouring that is being sought out, saffron is far too expensive to use for colouring purposes. Annato seeds are a reasonable substitute though. I do find that the flavours of turmeric and annato are not unsimilar.

And a little turmeric goes a long way! It is quite pungent in flavour and even the tiniest hint of it will turn a dish gold (as well as any table linens that get splashed :lalala:).

Turmeric appears to be the main ingredient in commercial curry spice mixtures – in fact, the overpresence of turmeric in those commercial mixtures is exactly why I started mixing my own spices for curry powder (I’ve always put curry powder into chili con carne and broccoli soup, even before learning that this is the normal thing to do when preparing a curry. Yes, too much turmeric can make things taste bitter.

Because of this bitter quality, I have even gone so far as to omit turmeric entirely from the curry powder mixtures I was putting together.

Turmeric’s staining capability may seem a nuisance to everybody who must clean cooking utensils — cutting boards are particularly hard to clean with brush and soap alone. The dye is, however, not light-proof and fades away after but one hour in direct sunlight.

Lately, here in the west, turmeric is being touted as being one of THE foods to eat. One of the curalls…. Canadian Living says that turmeric is in the “Top 10 superfoods” as an anti-oxidant and it is #9 of the New York Times article “The 11 Best Foods You Aren’t Eating”, labelled turmeric as the "superstar of spices," it may have anti-inflammatory and anti-cancer properties. Science Daily writes that according to a study made at the “Peter Munk Cardiac Centre” of the Toronto General Hospital, eating turmeric may “dramatically reduce the chance of developing heart failure”.

Other research is showing that turmeric may help in the fight against arthritis, Alzheimer’s Disease, stomach ulcers, cancer growth, lowering cholesterol levels. It may even be a dramatic source of help. Turmeric has been used in India for centuries as an anti-inflamatory and antiseptic. It appears to be one of the miracle foods.

Turmeric […snip…] is believed to have antiflatulent properties, so it is an indispensible early addition in the cooking of dal or beans.

reasons to add turmeric to your diet:

Contraindications: Turmeric should not be used by people with gallstones or bile obstruction.

Who knew?! Our cauliflower dish may not just be good; it might be very very good for us!

Now, I know you can’t believe everything you read, but it seems to me that we won’t be leaving turmeric out of our curry spice mixes any more. In all of the reading I have done, I’ve found nothing to say that turmeric is toxic or harmful, with the exception of the note about the gallstones.

It hadn’t occurred to me until typing this that it might be possible to grow turmeric. I have grown ginger in a pot. Turmeric is related to ginger so if you stick a healthy looking piece of turmeric root that has an eye on it into some soil (eye pointing toward the sky), I’m guessing that it will grow… how cool would that be to have your own turmeric plant?

T is completely convinced about the benefits of turmeric and takes a spoonful a day in water. He has been badgering me to do the same. But the taste…

As a concession, I’ve given him permission to put turmeric into many dishes. But not in any dessert dishes please.