(click on image for photos of making aloo paratha) 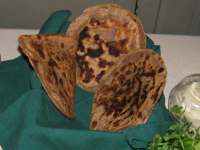 My wheedling paid off! (read more here) and we decided to try making stuffed paratha.

So as I mixed and kneaded paratha dough, T made a potato filling.

And about half an hour later, using Shyamala’s (“Food, In The Main”) technique, we made two “restaurant-style” potato stuffed parathas. Here’s how things were just as the first one was cooking on the tava:

T (disappointed tone): It’s going to be soggy. I can tell.

Me: I’m going to try stuffing and folding traditionally too. Do you want me to make one like that for you to try.

T: No thanks!! I’ve never had a stuffed paratha that isn’t soggy.

(the first stuffed paratha was done and placed in the basket)

Me: Hmm, that DOES look soggy. Do you want to make the rest as regular unstuffed? Then we can really compare.

I think we may have put too much filling in the round “restaurant style” parathas. Because they were a little soggy and quite dense. It wasn’t that they weren’t good. They just weren’t delicate and flaky the way the unstuffed paratha were.

But the one that I made using the traditional folding method was much closer to what I had hoped for. Because I knew that there would be a tendency for it to ooze and burst, I hardly put any filling onto the disc. Then I folded it over and brushed butter on the half-moon shape. Then folded that over and rolled it out.

(click on image for photos of making aloo paratha) 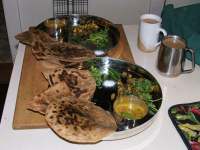 We had a little left over dahl as well to make our lunch absolutely sumptuous.

And it really was good too. The potato filling (roughly aloo gobi without the cauliflower and parboiling the potato first) was spectacular and the little bit of dahl was a brilliant touch.

I know it’s just a little bit of a stretch to label this as a WHB post, but we did put coriander leaf (aka cilantro) in the potato filling and served a little coriander leaf on the side, as well as garnishing the dahl with coriander leaf.

(click on image to see larger view of coriander) Our garden is still just getting started (tulips are finished, sage is starting to leaf, mint is abounding but otherwise everything is still just coming out of dormancy) so we bought coriander leaf. All of the stocks had roots on them so I plunged one of the stocks, root and all into a pot outside just to see how things would go. It is still thriving. Yay! But there are not any new leaves yet. I’m really hoping that it will flower and seed though.