Ah comfort food! Just the thing when it seems the world is turning upside down. 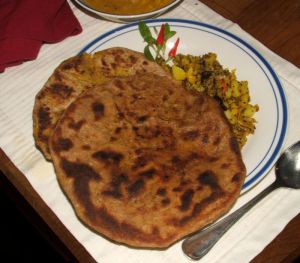 When Karen murmured that she thought maybe we should make stuffed parathas this month, I immediately responded: “Ooooh! J’ADORE aloo paratha! We were just talking about the fact that it has been ages since we’ve made them. I’ve made Madhur Jaffrey’s (plain and stuffed) and Mark Bittman’s look similar.”

A parantha/paratha is an Indian unleavened flat-bread, and is mostly consumed in the northern regions of India. The word Paratha (Parantha in Punjab) is an amalgamation of the words parat = layers and atta= flour and which obviously combines to mean layers of cooked flour. […] The Aloo Parantha is merely a variation or deviation, (whatever way you may want to see it) of a basic parantha. […]

The traditional way to have the Aloo Parantha would be with a big dollop of fresh homemade butter on a stack and with some yogurt and spicy pickles on the side. And the best way to enjoy these paranthas [is] in good company, laughter and someone serving these hot on the plate straight from the skillet!

I told T about this month’s BBB choice and he was as excited as I. Parathas are perfect for breakfast! Or lunch! Or dinner!

Monday, 11 November 2013, 10:48 We were going to make Parathas on Wednesday, but we suddenly decided that today would be the perfect day for making Parathas. It’s gloomy and cold. We want comfort food!

Already I’m rebelling. I’m NOT putting ajwain into the dough. I don’t like ajwain right now! (I used to like ajwain but we made a mistake and put it into chile con carne once. It completely ruined it.)

And I’m definitely not puttin ground cumin into the dough! Ewwww!

In fact, I’m going to rebel even further. I’m going to change just about everything… the only things the same are the name and the amount of flour.

(Shhhh! Don’t tell the BBBabes; they are going to kill me.)

Ha! I’m suddenly reminded of the chicken with almonds I made once. But instead of chicken, I used fish and instead of almonds, I used sesame seeds. Did you know that sesame seeds pop when they’re stir-fried? But that’s another story….

Heat a griddle or cast-iron skillet over medium-high heat for a minute or two, then put on a paratha (or two, if they’ll fit) and cook until it darkens slightly, usually less than a minute. Flip the paratha with a spatula and cook for another 30 seconds on the second side. Use the back of a spoon or a brush to coat the top of the paratha with oil. Flip and coat the other side with oil. Continue cooking the paratha until the bottom of the bread has browned, flip, and repeat. Do this a few times until both sides of the paratha are golden brown and very crisp, 2 to 3 minutes total for each paratha. As the paratha finish, remove them from the pan and brush with melted butter

Brush with oil and put a little butter on at the end? I DON’T think so. I’ll use a little sunflower oil in the dough itself but I’m brushing with butter! 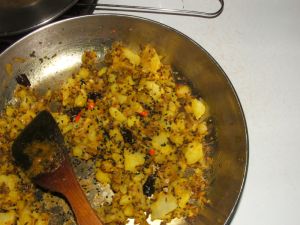 T is so excited about having aloo parathas that he decided to make the potato curry. He LOOKED at the BBB recipe. He is as disobedient as I. He decided to use different seeds. And more of them. And some ginger. And some dried AND fresh chillies. We have beautiful red chillies on a plant rescued from our garden and sitting happily under lights in the basement.

He also threw together some dahl (I love how quickly it is ready). And as the potatoes were boiling for the paratha stuffing, I started mixing the dough, using all whole wheat flour. And it suddenly occurred to me that I should use potato water! So I stole a little from the potato pot. I was kneading the dough and T wandered into the kitchen to check on the potatoes. He cautioned me that in the videos he’d seen, the dough had been quite slack.

I’m not dumb; I kneaded in some more potato water.

14:31 When I was getting ready to roll out the parathas, T asked me how many I was making.

me: Six.
he: Really, do you have enough dough? Each ball is supposed to be golfball size.
me: Yes, it’s enough. [forming one of the pieces into a ball] See? …golf ball.
he: It’s too small. Make four. Then they’ll be ready sooner.

Did I mention that I’m not dumb? I made four.

(It pains me to admit that T was right about the size.)

Rolling the paratha was ridiculously easy. We used a slightly different method than the last time we had aloo paratha.

Roll dough out into a disc; put a small amount of potato filling on one half of the disc, fold in half and brush with melted butter, fold in half again, roll out stuffed buttered triangle to about 1/8 inch thick; place on lightly oiled tava at medium heat, turn after it puffs up. 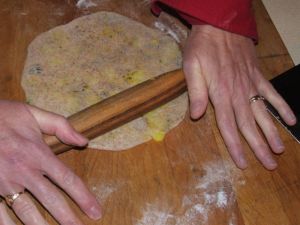 In fact, dare I admit that the method was quite close to what is in the BBBabe recipe? (Ha! Maybe I won’t be in quite as much trouble with the other BBBabes now.) I rolled each disc out into about a 5 inch circle, spooned in some of the potato curry and folded the edges over top. On the first one, I just started rolling. But the potatoes wanted to escape out the bottom as the dough got thinner and thinner. For the other parathas, I turned them over so all the folded dough was on the bottom. There was much less tendency for the potatoes to ooze out. 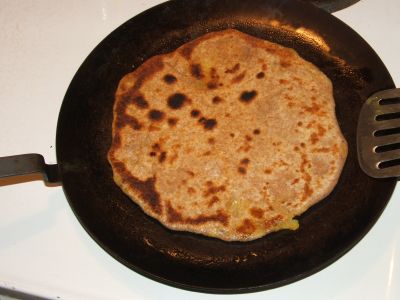 Then T put some salted butter on the hot tava and let it sit there sizzling. Just as the butter started turning brown, I placed the paratha on the pan. It took a short time to cook. T added a little more butter before turning the paratha to cook it on the other side. We stored the finished parathas in a warm oven until it was time to eat.

We were going to brush the parathas with a little more butter just before serving but it really wasn’t necessary. They were perfect just as they were.

We had the best lunch! Mmmm! Aloo paratha, dahl, and extra pototo curry. (Rats! Too bad we don’t have any coriander leaf!) Still, how fabulous lunch was. Thank you, Karen!

Sadly, we didn’t have any coriander leaf so we garnished with mint instead. Surprisingly, the mint wasn’t as refreshing as expected. It looked pretty though! These paratha were not quite as thin and crispy as the ones we made before. But they were easily as delicious. 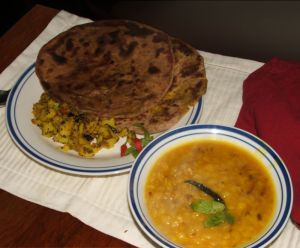 They were so delicious that T said we should have them again for dinner. I agree! Let’s have some tonight!

Here is the BBB November 2013 Aloo Paratha recipe. And here is what I did to it:

For serving, place the cooked parathas upright in a basket. Avoid stacking them or they will get soggy.

Serve the parathas with dahl and any extra potato mixture that you’ve warmed up. (There probably will be extra potato.)

1.) Water: Please, I know I say this every time. But do not use water from the hot water tap. Even though the other BBBabes mock me for this, I am like a broken record… (How old are your pipes? How old is the solder? When is the last time you flushed the sediment from the hot water tank? How many toxins want to leach out? Do you really want those in your bread?) Instead, heat the water in a kettle or microwave.

2.) Potato Water: Nobody calls for using the potato water but it seemed like a good idea when I saw that the dough seemed to be a little to dry. I have no idea if using potato water made any difference.

Tavas are available in many Indian grocery stores. They are made of carbon steel and are not only great for making flatbread, but also ideal for making crepes. If you don’t have one, a griddle or cast-iron frying pan works just as well.

The last time that I reported about making stuffed parathas, I rashly said the following:

Not so! These latest aloo paratha were easily as satisfying as unstuffed paratha! They may even have been easier to make. They’re certainly much less messy.

Thank you BBBabes for reminding me to keep an open mind.

This comes from “How to Cook Everything” by Mark Bittman. Aloo Paratha, that’s what I chose to bake for November. I saw the recipe earlier and immediately though that that should be the one. […] I am sure you all can come up with more variations on filling than I can mention here, but I do like the sound of garam masala with the potatoes, spring onions and peas instead of pot., or maybe cauliflower… […] go forth and bake my girls!

We know you’ll want to make aloo paratha too! To receive a Baking Buddy Badge to display on your site: make aloo paratha in the next couple of weeks and post about it (we love to see how your bread turns out AND hear what you think about it – what you didn’t like and/or what you liked) before the 27 November 2013. If you do not have a blog, no problem; you can also post your picture(s) to Flickr (or any other photo sharing site) and record your thoughts about the bread there. Please remember to email the Kitchen of the Month to say that your post is up.

Please take a look at the other BBBabes’ November bread: 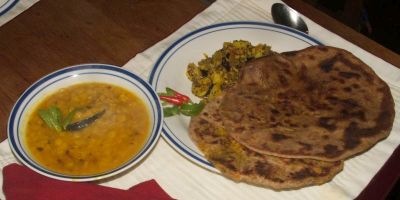