summary: interestingly shaped bread; what to do with dough that has over-risen overnight; make sure there’s plenty of flour under shaped bread before transferring to the oven; information about YeastSpotting (click on image to see larger view and more photos)

Update on that oozing bread dough from yesterday, to answer Ollie and Gosia: Why yes! It did turn out. Amazingly well. 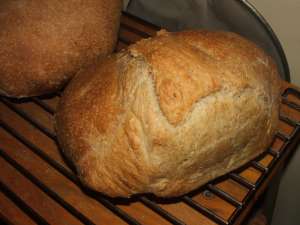 Yesterday, when I examined the oozing bread dough more closely, it was clear that what was still under the lid was fine. It was quite sloppy dough anyway (did I put a little less flour than usual? I know I was somewhat casual about measuring…), but it had become even more sloppy with the over-rising and possible under-kneading. (I was experimenting with a quasi no-knead technique, kneading in the bowl just after mixing, only enough to make sure there were no large lumps.)

It wasn’t so sloppy to be croc sloppy though (thank goodness), so I had hope that the bread would turn out. And happily, my hopes were not dashed.

The recipe is supposed to make three loaves. But I had to cut away a considerable amount of dough – everything that was on the floor of the unheated area by the backdoor was toast (no pun intended).

Yes, it’s true. I haven’t swept or vacuumed there recently and there has been a LOT of tracking back and forth from the barbecue and herb pots on the patio that is now covered in little golden leaves.

So. There was still enough dough to make two good sized boules. Initially, I was going to toss the slightly dried dough that was outside the bowl but not on the leafy floor. And then, throwing whatever caution was left to the winds, I simply tucked the dried part inside the loose wet dough and shaped away.

Because the dough was quite wet, I put LOTS of flour on the board before leaving the loaves to rise. I did. I really did.

When the oven was nicely preheated, I chickened out on moving the loaves onto the stone and asked T to help me. He looked at me pityingly and using the SuperPeel, with a triumphant flourish, he transferred the first loaf to one side of the hot stone. 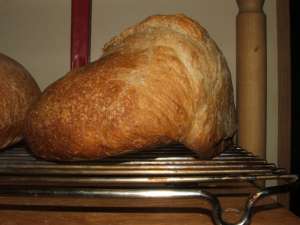 He then picked up the second loaf and…

me: [feeling of doom] What? What’s wrong?