summary: recipe for Iraqi Chicken; a new (for us) spice rub with the surprise ingredient: dried rosehips; SAVEUR outdoes itself; (click on image(s) for larger views and more photos)

I was sitting on the subway, reading Felicia Campbell’s memoire “Hearts and Minds” about her time as a soldier in Iraq included in the recent ‘grilling’ issue of SAVEUR magazine and suddenly, I found myself weeping.

[A]s soon as the shop opened, the warning signs went up, painted letters on plywood boards: “Unauthorized eating establishment: Eat at your own risk. It is against military regulation to intentionally harm your body. Use discretion when consuming unsanctioned food.” […]

I didn’t look up at the owner of the brown hands that passed me a Styrofoam plate lined with thick, soft, warm flatbread topped with half a chicken. I was thankful that the food looked straightforward and safe, delicious even.

Over the years, I’ve often been moved by various articles in SAVEUR. But I’m rarely moved to tears.

And suddenly, I couldn’t wait to get home to tell T all about it. And to say that we needed to buy chicken and rose hips.

me: Yes. Rosehips. We HAVE to try this spice rub. [riffling through the magazine to get to page 42] …Listen, I’ll read the article to you. [reads "Hearts and Minds", voice catching at the end]

And so we did. We decided we’d serve it with pillowy soft Persian flatbread, nan-e-barberi. Of course. What else?

After I had mixed and kneaded the dough, we jumped on our bikes and headed to Kensington Market to get the ingredients. Surprisingly, rose hips weren’t as easy to find as I thought they would be. I imagined that if we didn’t find the actual rose hips, we could just buy rose hip tea. But every box of rose hip tea was adulterated with hibiscus flowers.

We were amazed that the spice store in Kensington Market, that we thought had every kind of spice imaginable, a.) didn’t have rose hips and b.) had no idea what they were. The girl kept describing them as being really tiny and red (I wonder what she thought she was describing). I said that I suspected they were about the size of rosehips – not all that little. She just looked a little confused until I showed her the picture of rosehips on the box of not-rosehip tea on their shelves. She kept rummaging through various shelves, certain they had rosehips. When it became clear that they really didn’t have any, she suggested we go to one of the Health Food Stores down the street.

We bought a handful and immediately pedalled home and humming happily, T got busy in the kitchen: grinding, chopping, stirring, slathering.

We sat out in the garden while the chicken grilled and the bread baked. 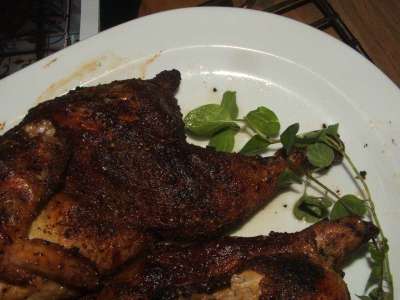 We garnished the chicken with a little fresh oregano from the garden. And then, as Felicia Campbell had done before us, we “wrapped pieces of meat in the pillowy bread that was stained with grease from [our] fingers. [We] ate and ate, the flavors of cardamom, coriander, fenugreek and turmeric, cloves and allspice, pepper and rose hips” thrilling us.

I know. I say that all the time. But really. It was. Bar none.

Here’s what we did:

Iraqi Chicken
based on the recipe for Djaj Bil-Bahar Il-Asfar (Iraqi Yellow Spice-Rubbed Chicken) in SAVEUR no. 157

Serve immediately with flatbread. Garnish with fresh herbs from the garden if you have them. A simple vinaigrette-style cole slaw is great with this. So is baba ganoushe (remind me to tell you about that).

2.) turmeric: The SAVEUR recipe calls for “curry powder” We never have any commercial curry powder on hand because most commercial curry powders are essentially turmeric with a trace of a few other spices. I’m not the biggest fan of turmeric – I find that it tastes bitter, so whenever I make
curry powder, I generally put in only a pinch or leave it out entirely. But the SAVEUR spice rub is called “Iraqi Yellow Spiced Chicken” so turmeric does seem to be in order.

3.) garlic granules: The SAVEUR recipe calls for 8 cloves garlic, mashed into a paste. (Next time, I think we should try fresh garlic just to see if there’s much difference.)

I still cannot get over Felicia Campbell’s stunningly beautiful article. It is so heartening to read about this brash young provincial girl being transformed into a thoughtful worldly woman of humility. This is one of the reasons I love SAVEUR magazine. It’s not just about the food.

But I can’t say what I’m feeling nearly as well as Felicia Campbell does. Here. This is what I’m trying to say:

I continue to look for Iraqi chicken […] because it reminds me of […] those gracious men from The Club. I know I’m unlikely to ever see them again, but I still long to thank them for feeding me. With that simple grilled chicken, they nourished my humanity, so often the first casualty of war. 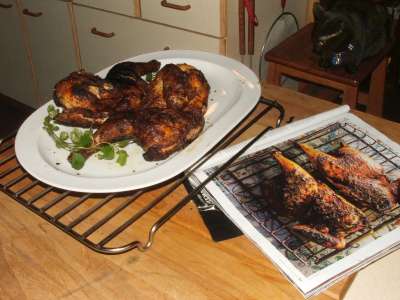 edit 27 July 2013: We had a discussion about the dried peppers. T is convinced that the dried chiles we buy in Indiatown ARE chiles de árbol. I still think they’re cayennes.

However, from what they say in the Cook’s Thesaurus, either one will work equally well. Both have the same “very hot” heat rating:

cayenne pepper = Ginnie pepper Notes: These are very hot, bright red chiles. Recipes that call for cayenne pepper may be referring to a ground powder that goes by the same name, or to the fresh version of the pepper. Substitutes: chile de Arbol OR guajillo […]

chile de arbol = arbol chile = red chile […] Unlike many chiles, these remain bright red even after drying. They’re fairly hot. Don’t confuse the dried version with the fresh, which goes by the same name. Substitutes: cayenne pepper OR pequin chiles

4 responses to “An Amazing Spicerub with Dried Rosehips”