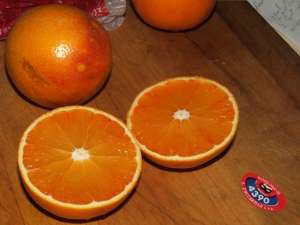 The label says “blood oranges” (imported from Italy) but these sure don’t look like the blood oranges I’ve seen in the past!

So I did a little googling about blood oranges. Very very interesting!! It looks like the oranges we bought (1.50/lb) are Tarocco oranges. And it looks like Tarocco oranges are renowned for having just a hint of the red colour. Hmmmm. Maybe we haven’t been robbed after all….

Here’s what I learned from googling:

The blood orange is a variety of orange (Citrus sinensis) with crimson, blood-colored flesh. […] The three most common types of blood oranges are the Tarocco (native to Italy), the Sanguinello (native to Spain), and the Moro. […] [The Tarocco is] a medium-sized fruit and […] is thought to have derived from a mutation of the “Sanguinello”. It is referred to as “half-blood”, because the flesh is not accentuated in red pigmentation as much as with the Moro and Sanguinello varieties. It has thin orange skin, slightly blushed in red tones.

Tarocco Blood Orange is a great mid-season variety and one of the more popular in Italy. A medium to large size fruit has orange exterior with a red blush and deep orange to red flesh. The internal color of the flesh varies with the climate it grows in. A juicy fruit that has sweet distinctive flavor and few seeds.

Blood oranges contain vitamin C, folic acid, anthocyanins, calcium and Vitamin A, among other minerals and vitamins. They are rich in antioxidants and are a very good source of fiber. The levels of vitamin C are higher on these oranges compared to regular oranges. The blood orange is also known as the anti-aging orange.

Luckily, oranges are oranges and even though our blood oranges are less than thrilling to look at, we felt certain that the marmalade was bound to turn out. We hoped….

Because I really wanted to try the blood orange marmalade with black pepper that I saw on Baking Obsession.

Whoa!! 6 oranges and we only made 2 jars of marmalade!

We were so concerned about repeating the mistakes of the Seville orange marmalade that we insisted we MUST use the thermometer when we were at the boiling stage. We really didn’t want orange syrup.

I bet you know that we didn’t make orange syrup. Nope. Our marmalade set like concrete. Especially the marmalade I made….

T thinks that the problem he had was that he didn’t turn the heat down when the marmalade started bubbling like crazy so that the thermometer was measuring the temperature of the air above the boiling orange juice rather than the boiling juice itself.

And my problem? There was just too little sludge for the size of thermometer. We have a honking big candy thermometer and I was using a rather small pot. Not to mention the small amount of orange sludge I produced.

One thing I really liked about the marmalade I made was that it calls for honey rather than sugar. The aroma of hot orange flavoured honey is delicious. A little wild and rustic.

Boiling Because the amount of marmalade is so small, you’ll have to eyeball it. I’m guessing that it should be reduced by no more than half. If you do have a thermometer that can read the temperature, I’m guessing you should aim for 220F.

Amount of Peel The next time I make this (if there is a next time), I’ll follow the Bon Appétit idea of mixing the finely grated peel of one of the oranges into creamy goat’s cheese. Using the peel of all of the oranges is too much peel and makes for quite a bitter marmalade. Almost all the inner fruit flavour is lost.

We’ve decided that the Black Pepper Marmalade will be very good as an addition to the gravy when we make Orange Chicken or Duck a l’orange.

Although… I still want to try the Bon Appetit idea of spreading Goat’s cheese on toast and then topping the cheese with a spoonful of marmalade. I want to try it with goat’s cheese AND with a brie that we have.

One good thing about the Bon Appetit marmalade is that the amount of honey is perfect.

And the traditional marmalade is very good as well: floral, light, orangey. A little sweet perhaps but still far superior to any of the standard commercial marmalades we’ve purchased in the past.

And how did T deal with the fact that the marmalade was too thick? He added some water before processing the one jar.

Didn’t we feel like dufusses processing one jar of marmalade in a giant vat of water? (At least we didn’t waste the water. We’re using it to water the basement plants….) 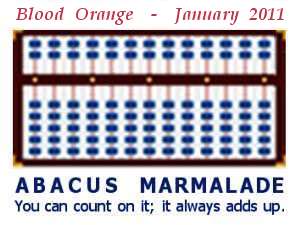 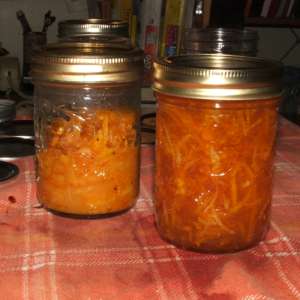