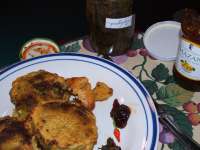 A while back, I said that pakoras were the ultimate weekend breakfast. Well, thanks to SAVEUR Magazine, I’ve changed my mind…

We have had a subscription to SAVEUR for some time now. Each issue is full of wonderful ideas and articles. I love getting the magazine. It takes me about a month to read through each page. I read it slowly, savouring it (oops, no pun intended there), and just as I’m reluctantly reaching the end, a new issue appears in the mail box.

But we’re starting to have difficulty finding places to keep the back issues. They’re in stacks or on shelves in various rooms – some in my office, some on the cookbook shelf, some in the bedroom, some in the living room, one on the telephone table and a couple that get rotated in the bathroom. I know. Not the best cataloguing system.

The other day, T was leafing through the April 2005 issue and noticed a short article about Vada-Pav (“this ain’t no egg mcmuffin”), a Mumbai street food treat, described by the author David Leavitt’s friend as “carb-loading BLISS”. There was no accompanying recipe for it, just a description that it is spicy mashed potatoes covered in chickpea batter, fried til golden and then served inside a soft roll. As he read, he couldn’t stop dreaming about the wonderful aloo chops he used to get much further north in India in Varanasi. Aloo chops that seemed to be pretty much like the filling for Vada-Pav. And he suddenly decided we neeeeeeeeeded aloo chops.

So into the kitchen he went humming and started boiling potatoes, chopping onions, peering into spice jars and pulling out pans and racks. And accompanied with that lovely music, he made the most wonderful aloo chops!

The only thing wrong with them was that we forgot to heat up the left-over kidney bean curry in the fridge. Hmmm, not exactly much to be wrong there, is there? In fact, such an easy wrong to right. All we have to do is have aloo chops again soon.

Oh my. You really must try these for breakfast. They’re delicious!

Here’s what T does to make his aloo chops:

Aloo Chops
Nope, once again, no measurements. You’ll have to wing it. 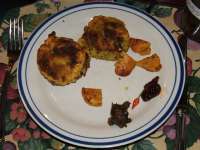 The little red chili is a devilishly hot “cayenne” (or so it said on the label at the garden center) from an overwintering plant in the basement. Even T has difficulty eating these chillies!