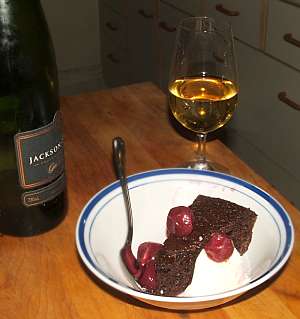 The day wasn’t too hot – about 28C, sunny and a little breezy. And then just before dinner, there was a very brief (about 30 seconds) rain storm – not even enough to get the chairs wet. The clouds moved off to the east and the evening was beautiful.

In the afternoon, we went for a short bicycle ride to a new fish store nearby to get snapper fillets. We ALMOST got scallops but decided they were just too expensive. Then we stopped at our favourite vegetable stores to get Asian eggplant, okra and asparagus. We couldn’t believe that beautiful looking Ontario asparagus was still available so far past June! 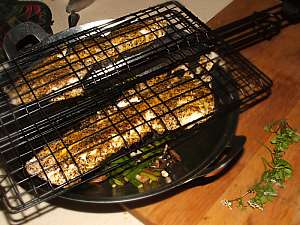 Then we headed home and I swept the patio and set the table. While I was in the garden, T slaved away in the kitchen, making South-Indian coconut sauce (the same one that we were so thrilled about on Canada Day – the very one that T right back to Kerala). It’s pretty simple – he uses Mr. Patak’s Madras curry paste to flavour coconut milk. (Remind me to ask T what other things he added to finish the sauce.)

The sauce would go over the fish that he grilled in one of those flat cages on the barbecue.

Yes. I know. The cage is for hamburgers. So sue us.

He also cut the okra into coins and cooked them with a tiny bit of oil until they were chewy – no slime for us, thank you! 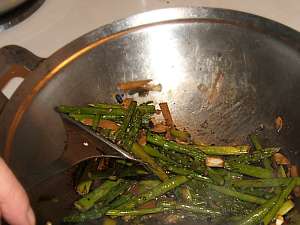 He barbecue-wokked asparagus with ginger and garlic and black beans as well as grilling Asian eggplant slices. And rice. Of course there was rice.

We cracked open a bottle of chilled Gewurtztraminer (Jackson-Triggs) that SHOULD have been opened ages ago. We worried it would be maderized. And maybe it was beginning to do just that. But there was still lovely acid balance and its sweetness was perfect with the Indian flavours. 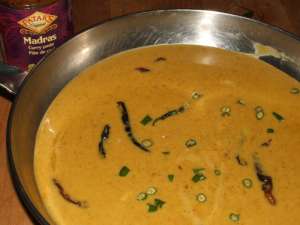 We loaded up the plates and took them out to the table on the patio.

Dinner was thrilling. All the flavours were heightened by the soft beautiful late sun sifting through the leaf canopy. The deep blue storm clouds were still to the west on the horizon and in front of them the leaves shone golden as the sun began to set. 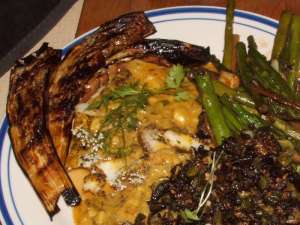 One of the things I really love about summer dining is that we can garnish our plates with herbs from the garden. I plant lots of different herbs – thyme, tarragon, dill, oregano, marjoram, chives, lovage, coriander, mint. Most of them flourish (in spite of the fact that they are in deep shade most of the day). Alas, I’ve never managed to get dill to survive. And mint… don’t get me started on how I am the only person in the world who has managed to kill off mint.

But coriander does flourish even though it goes to seed almost immediately. It just doesn’t belong in our northern clime. But I can’t stop myself from planting it. Its flavour is so intensely bright – much more thrilling than store-bought hothouse coriander leaf – that just one leaf offers easily as much as a whole handful of storebought coriander leaves. The lovely delicate flowers have the same flavour as the leaves. Sure, we want the coriander to go to seed but I just couldn’t help myself from cutting some to garnish our dinner. As the sun began to disappear and we were thinking of lighting the candles once we’d cleared the dinner plates, we heard scuffling in the tree above us and were just a bit nervous to see a little raccoon peering down at us. He was tiny. And his fur was still fluffy like kitten fur. And he wasn’t alone. He had brought his siblings with him. There were 5 in all. They’re very cute!!

But… they are wild animals. And because the mosquitoes had also begun to move into attack mode, we decided to flee indoors for dessert.

And what a dessert it was!! We had homemade chocolate cake soaked in a bit of Kirsch, to go under stewed cherries and a little sweet cream ice cream (yes, that too was homemade). We would have just gone ahead and made Black Forest Cake but in the recent past, I have been strictly instructed to keep away from cheese, butter, cream, fried food – essentially all fun food. (Imagine an asparagus season going by without at least one Hollandaise fest!) The only plus-side to these harsh privations is that I can get my belt done up again – since Easter, I’ve dropped 15 pounds!!! (I had no idea that I ate that much cheese and butter.) 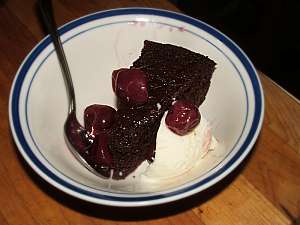 I just noticed that it’s Friday the 13th. Should I be nervous? Or, rather, should I be more nervous?? (I’m already somewhat apprehensive about the impending heat. It’s quite humid and already 27C and it’s only 10am. Eeeeeeeeeeek!

Edit: T pointed out that I had misspelled “maderized” (I wrote “materized” – Firefox had already warned me that “materized” was wrong and suggested “materialized”, “dramatized” and “mattered”). Even after fixing the spelling, Firefox continues to tell me that “maderized” is wrong and suggests “marinaded”. (I didn’t know that “marinade” was a verb!)