Many thanks to Inge for this challenge to combine a common with a not so common ingredient! I must say that yesterday I was completely unsure about the following:

They Go Really Well Together (TGRWT) #6:Apple and Lavender 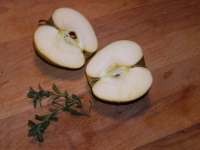 I was intrigued by the idea of lavender and apple combination. But I must say that lavender has never been my favourite flavour. I find it almost too perfumy.

There was also the problem that not only did our little lavender plant not produce many flowers at all this year, but I didn’t harvest them. All we have is lavender leaves.

However, I was pretty sure that the leaves could be eaten as well. I did a little googling and being a firm believer in “Everything on the internet is true”, I was very happy to see that on Hub UK, Linda Stradley wrote the following:

The uses of lavender are limited only by your imagination. The flowers add a beautiful color to salads. Lavender can also be substituted for rosemary in many bread recipes.

The spikes and leaves of lavender can be used in most dishes in place of rosemary in most recipes.

With that information, there was nothing really to stop me. Initially, I was going to use a recipe I found in one of our cookbooks or on the internet. I didn’t really see much that excited me in the cookbooks. I was vaguely intrigued by the idea of this lavender focaccia. I got a little more excited by this apple tart and these scones.

But then in the end, last night before dinner, with the deadline quickly approaching, I decided to just wing it. We had some goat’s cheese in the fridge and a couple of golden delicious apples (Ontario grown) on the counter. I decided to make a savoury tart with apples, cider vinegar, goat cheese and lavender leaves.

Of course, I had NO idea how much lavender to use. And I was really concerned that the lavender would completely overpower the apples. Especially after reading what “What’s Cooking America?” says about lavender:

Flowers and leaves can be used fresh, and both buds and stems can be used dried. […] Adding too much lavender to your recipe can be like eating perfume and will make your dish bitter. Because of the strong flavor of lavender, the secret is that a little goes a long way. 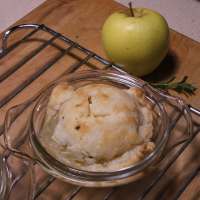 I was relatively certain that the apple and goat cheese combination would be good. But I was quite worried that the addition of lavender would make the tart horribly perfumed, especially as I was cutting the sprigs from the plant. The idea of eating a tart that smells of an elderly lady’s potpourri was quite distasteful! So instead of using lavender in both tarts, I made one plain apple tart and one with lavender. 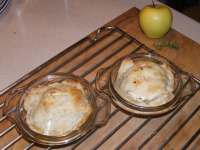 We ended up having these for dessert rather than as a starter. I think they would work well either way. And how did the tarts taste? Well, rats. I really wanted to say that apple and lavender is the most amazing combination and that I can’t believe how fabulous it is. I was very excited that I might have discovered a use for my lavender!

But alas. No. I must tell the truth. I couldn’t taste the lavender at all. The apple was most definitely the prominent flavour. Either the tart really needs the lavender flower or I didn’t use enough lavender at all. (I really thought that two sprigs worth would have been enough for one tart!)

The filling was pretty good, in spite of having no lavender flavour at all. And there was the tiniest hint of lavender wafting out of the tart just as I pulled it out of the oven. But when the tarts had cooled, the lavender disappeared entirely. Perhaps I should have chopped the leaves more coarsely?

The tarts were not quite as savoury as I would have liked. The goat’s cheese was on the mild side so it’s flavour got lost as well. (I’m wondering if a blue cheese might not have been a better choice.) And in retrospect, I could have added a little onion as well.

You may have noticed that I haven’t said much about the pastry. It was flaky and crisp and golden and I should have used less salt!! Way less salt!!! Alas, I put far too much salt in the pastry (this is what comes of halving recipes and NOT using measuring spoons!). While I like the combination of sweet and salty, this just ended up being salty.

Will I try the combination again? Maybe….

They Go Really Well Together (TGRWT) is an event conceived by molecular gastronomist, Martin Lersch (blog.kymos.org). The idea is to pair flavours based on the chosen ingredients’ content of volatile aroma compounds.

I have NO idea about volatile aroma compounds except that it has something to do with how the things smell, and hence, taste. I know very little about the science of it (I think I was away that day in school…). Googling about it either offers zillions of pages about essential oils or scientific .pdf files that I am ill equipped to even open, let alone read… The following is about as advanced as I can manage.

An essential oil is any concentrated, hydrophobic liquid containing volatile aroma compounds from plants, which are called aromatic herbs or aromatic plants.

And, of course, I do get the concept of how the two senses, taste and smell, are closely linked….


TGRWT #6 is hosted by Inge (Vanielje Kitchen), who wrote the following:

Colour Me Happy – I’m hosting TGRWT #6 […] I’m already drooling and painting a mental picture with this month’s pairing: Apple & Lavender! […] [T]he possibilities are endless, so get your palettes out, and your aprons on, and start working on your masterpieces. You have until October 1st [2007]. Don’t forget to make them 4-D artworks: colour, smell, taste, and styling, and let us know how you did it. […] Readers will be particularly interested in how the flavour pairing worked out, so make an attempt at describing the taste and aroma and whether you liked it or not.

For more information about TGRWT and complete details on how to participate, please go to:

edit 6 October 2007: Inge has posted the roundup. People have really come up to the plate with sweet and savoury dishes using apple and lavender! Do take a look: