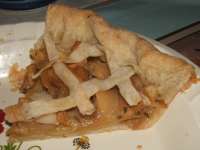 When am I going to remember to take photos right away?! This is the last little bit of the most fabulous apple pie.

And if it was so fabulous, why was there still so much left after a couple of days? Because we made TWO apple pies….

We have the most wonderful neighbours. Last weekend, I got a message saying “I have apples. You make great crust. How about: I make filling and crumb topping. You make a double crust. We merge efforts and magically two pies appear!”

How can I say no to such an offer?!

Because she’s right. I do make great crust. In fact, I’d go so far as to say that I used to make THE greatest crust. But a while back, T asked me to teach him how to make pastry. And naturally, now HE makes the greatest crust (mine is a close second).

So I informed T that he had to make pastry for two pies and that they would prepare the apples next door. The next morning, armed with pastry, dough scraper and our superpeel, we hopped over the fence and proceeded to have way too much fun constructing pies.

The original plan was to put a crumb topping on both pies. But I neeeeeded to play with my SuperPeel. I was really anxious to try lifting a lattice topping.

Oh my!!! The superpeel really is super. I too was amazed by the lattice piecrust video (superpeel.com video: “Make a Pie! Moving Pastry Made Simple!”) and HAD to try it! I must confess I wasn’t quite as successful as the person on the video but I think it’s because my lattice was rather lacy in comparison. I think the pie looked beautiful (others disagreed, in a mocking but friendly way, saying that looks weren’t everything and that they were sure it would taste alright).

All in all, we had a great time building pies together. And while the pies were finishing baking, we drank coffee and snacked on just baked pastry strips flavoured with cinnamon sugar. Life doesn’t get much better, does it?

Here’s what the two Ts did to make the pie with rosemary:

Serve hot or cold – as is, or with ice cream. Or sharp cheddar. Or goat’s cheese. Serve the leftovers (if there are any) for breakfast with yoghurt.

Note that the juice might have a tendency to overflow while the pie is baking. Make sure there is a tray on the next rack down to catch the juices. (It’s much easier to clean a tray than to clean the oven.)

Rosemary in apple pie is fantastic!

Which shouldn’t really come as a surprise because apple lavender pie is so delicious. But I think the rosemary has a slight edge over the lavender and I’ll definitely make this pie again!

When I was looking for the epicurious version of the apple rosemary pie, I came across honey apple pie with thyme. If rosemary with apples is good, then thyme must be pretty fantastic as well.

Oh yes, don’t let me forget to say that the other pie we made was a sugar and cinnamon version with a crumb topping. It too was delicious! (Sorry no photographic evidence. We were very busy licking our plates clean.)

Hmmm, is it time to make pies again?