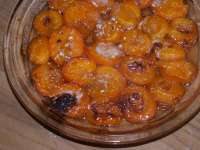 When we got home last week, I was pleased that I had put the rest of the bagels in the freezer so we could have bagels. And as an added treat, we used up the the last of the apricot jam I made in August. Apricot jam that tastes like apricots!

I had meant to rave about this method of apricot jam making before we left, when apricots were still in season. I got the idea out of “The River Cottage Cookbook” by Hugh Fearnley-Whittingstall. ¹ It’s insanely easy. (I love Fearnley-Whittingstall’s methods for cooking things. Simple preparation, few ingredients, fabulous return in flavour.)

The thing I liked about this method is that it doesn’t require standing over the stove and stirring. I’m sure it could be done easily in a barbecue or over a fire as well.

As I was washing the apricots, I remembered seeing Laura Calder making Country Apricot Preserve and using a hammer to open the pits and adding a couple of the kernels. 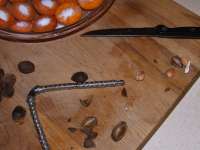 And I thought why not try that too? (I know; apricot pits contain small quantities of cyanide. But the French have been adding apricot pits to their apricot jam for eons and unless they are really really clever at hiding the evidence, I’m guessing it must be safe. Note that the news isn’t filled reports of several cases per year of cyanide poisoning from eating apricot preserves.) 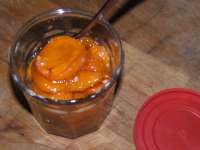 Here’s what I did to make wonderfully fruity apricot jam:

Serve with bagels and cream cheese, toast, pancakes or on ice cream. Store in the refrigerator if you haven’t already finished the whole jar.

Notes:
:: There are no real measurements here because apricots are so variable in their sweetness. Just use your judgement. The first time I made this, I thought the apricots were plenty sweet and didn’t use enough sugar. But it was pretty simple to drizzle a bit of honey over top.

:: Make sure you taste (but not too much!!!) the nuts inside the pits. They can be VERY bitter. If that is the case, omit the nuts! However, if they taste sweet like almonds, by all means, throw a couple in. Please do NOT encourage your children to taste these raw kernels. (Danger danger danger!!)

:: If you’re using a metal baking dish, it’s probably a good idea to line it with parchment paper. Some of the sugar does burn.

Too bad that apricots are finished now so we can’t make any more of this. (Why oh why didn’t I buy more apricots when they were available?!) But I’m thinking this method would probably work for peaches too. And there are still great looking peaches available. What do you think? (Don’t worry; I won’t even think about cracking open the peach pits. That’s craziness.)

This book is quite fantastic, full of lovely recipes for living. If you haven’t yet got a copy of “The River Cottage Cookbook“, read about his baked squash with cream and cheese that we made…. Also, do try some of the River Cottage Seasonal Recipes on The River Cottage website.

2. Various findings on the internet about apricot seed safety:

Raw pits of the bitter apricot (not sweet) do contain a small amount of cyanide. However, the accidental ingestion of a single pit or the splitting of a pit to expose it to the fruit flesh should not be a problem. Ingestion of large amounts can be harmful. Fifteen raw apricot pits of some bitter varieties can kill a child. Roasting of the seeds neutralizes the cyanide threat. […] The drug laetrile, used for some controversial cancer treatments, is derived from apricot seed extract.

-Peggy Trowbridge Filippone, about.com, “Apricots and Health: The truth about cyanide in apricots”

Bitter seeds should be eaten in strict moderation, but sweet ones can be eaten freely. The bitter seeds can be used as a substitute for bitter almonds in making marzipan etc.

Hydrocyanic acid is a dangerous poison (about one twentieth of a gram is considered lethal for an adult), but it is also very volatile and susceptible to hydrolysis at higher temperatures. Therefore, significant amounts of hydrocyanic acid are highly unlikely to accumulate in any dish prepared with bitter almonds. On the other side, incorporation of whole raw bitter almonds is fairly dangerous because, in this case, all of its hydrocyanic acid is formed in one’s stomach. Serious poisoning is quite rare with adults, but children may be killed by just a few bitter almonds. Very similar warnings hold for other plants of the genus Prunus, the kernels of which all contain amygdalin (though in smaller amounts): Peach, apricot and, to an even lesser extent, cherry and plum.

Please read about other apricot preserves (made using dried apricots):