I did try again. Really I did. I had to. How could I not with the amazing bubbles created by the chickpea flour starter? 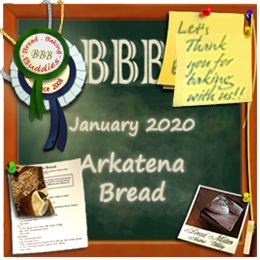 I thought it was going to be an easy bread to make. Something perfect to rest with after all of December’s complex festive baking. Bzzzzzzt! W.R.O.N.G. – me, (blog from OUR kitchen)
To say we loved this bread is an understatement. […] Yes, you want to bake this bread! – Tanna (My Kitchen in Half Cups)
Love the texture of this uniquely leavened bread, even if it took me a couple tries! – Kelly (A Messy Kitchen)
Elizabeth gave us an exciting challenge – using chickpea flour in a starter and baking a delicious bread. […] Fortunately the Babes are not wedded to rules. […] I use[d] my wheat starter as the base for the chickpea starter […] The crumb was a bit dry but there were nice air holes here and there, it was chewy, and the flavor was lovely. I really liked the crust and sesame seeds on the outside. – Pat, aka Elle (Feeding My Enthusiasms)
Challenging indeed. It’s no-go this month. The first three evenings looked promising; the additions of the fourth evening caused the starter to crash and burn. No life (even after 10 days!). – Judy (Judy’s Gross Eats)
Something similar happened to me too, so no bread to post. – Aparna (My Diverse Kitchen)
I really like the flavor of the Arkatena Bread. I think I cut mine a bit too soon, but it tasted great! Love the addition of the fennel seeds. – Cathy (Bread Experience)
It starts out simple enough. The starter is made with chickpea flour, and because of the nature of chickpea flour, only takes 3 days to accumulate enough yeast to raise the dough. […] Then comes the list of steps to actually make the bread. No one thing is difficult it’s just that…. – Katie (Thyme For Cooking)

I know I shouldn’t be even remotely surprised once again to have received zero notices about BBBuddies baking Arkatena bread.

And not just because the days of blogging, just for the sake of blogging, appear to be waning. But one person did post – in detail – about his Arkatena adventures on FB. I asked permission to display his photos….

Here are the two loaves of Arkatena bread that this intrepid man made and posted about in Facebook:

Scott D, California
I was quite thrilled when I saw Scott’s reply to a thread about Arkatena Bread in the FB group, Bread Baking Babes and Friends: “I started it”. 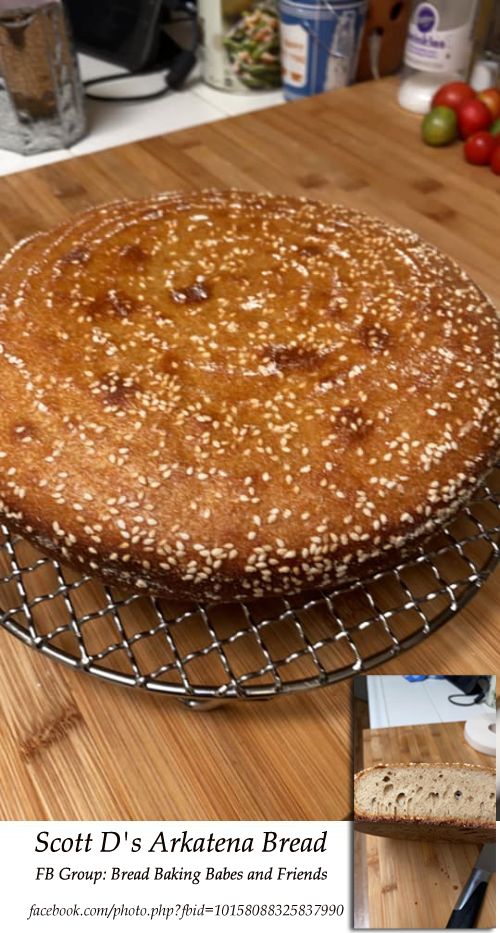 He went on to write I used organic rye for the first two days of starter and then switched to chickpea flour. It was quite active. I’m about to do the late evening the night before mixing. I’ve no whole wheat in the house. So I’ll use a mix of rye and einkorn. […] I have to say the chickpea smell is weird. Hmmm. That’s one way of putting it. I think the smell is downright unpleasant. But, I must admit that once the bread is baked, that chickpea smell disappears and the overall aroma is really lovely and slightly nutty. Scott conquered, reporting that the bread It smells a lot better baking than as dough. […] It’s beautifully brown.
However, he also commented that the bread was “super dense”, that the “crust is very thick”, but at “least it’s tasty”.

After Scott asked, “how do I turn this loaf into rusks? It’s too dense for anything else”, I told him about Paula Wolfert’s instructions on how to turn Arkatena Bread into rusks. His response: My arm will be sore from sawing the slices! and then added, Ah ha. Found a solution. […] Nesco FS-200 7.5 food slicer, Silver 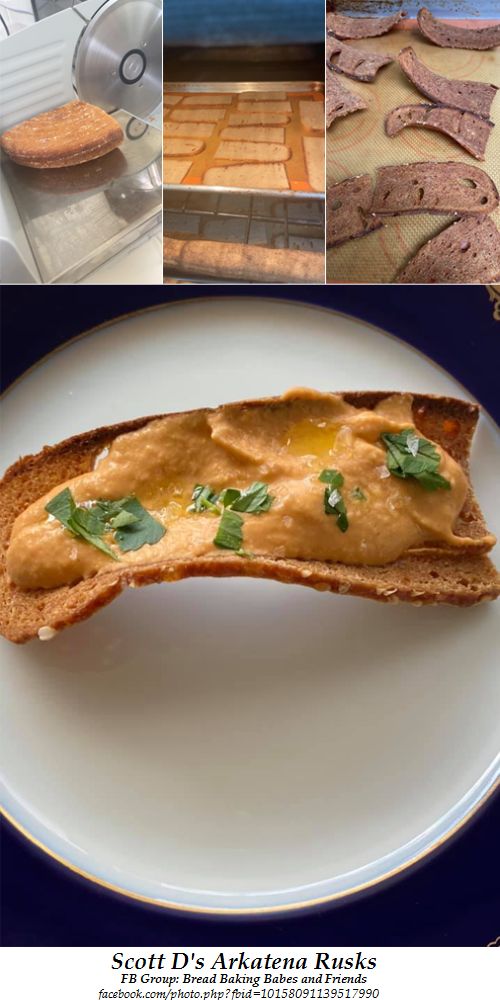 He continued: I feel like a hero. Sliced thin they curled and are super crunchy. They needed hummus. But I had no Tahini. I had too many sesame seeds from a shopping error. So step one make tahini. Step two make hummus. Step three convert half to roasted red pepper hummus.
Amazingly, ever heroic Scott tried making Arkatena again! This time, he said he was, “[f]ollowing the recipe exactly” and then came back into FB to report:
OK four days into trying to get the chickpea flour to do anything and I think I’m going to give up. I gave it another day, but no way this starter is going to make anything rise.
But. As he was about to throw the so-called starter away, he noted that “it had bubbled and gotten spongy” and he “forged ahead”. This time, to make sure of the rise, he added 3 grams of instant yeast and baked the bread in a soufflé dish so it would rise up rather than spread out. 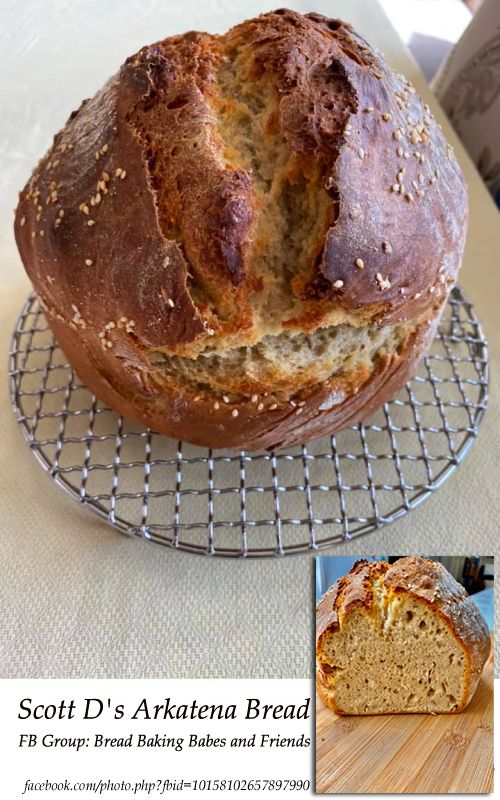 Wow! Fantastic! It just proves (pun intended) that there is good reason that commercial yeast is used almost universally for baking bread.

For this second loftier Arkatena loaf, he “skipped the rye […] put in the fennel seed”, going on to say, I like the fennel. Caraway would be good too. Maybe cumin. I used Einkorn instead of whole wheat. […] For all the holes it’s still pretty sturdy, not light..

You really are the BBBest!!

If I missed posting about anyone’s January 2020 BBB Arkatena bread, please do let me know.

Scott was not the only one to bake more than one Arkatena loaf. Tanna’s 1st Arkatena loaf was so successful that she showed off by baking the bread again! And, once again, she didn’t have to resort to adding any commercial yeast! 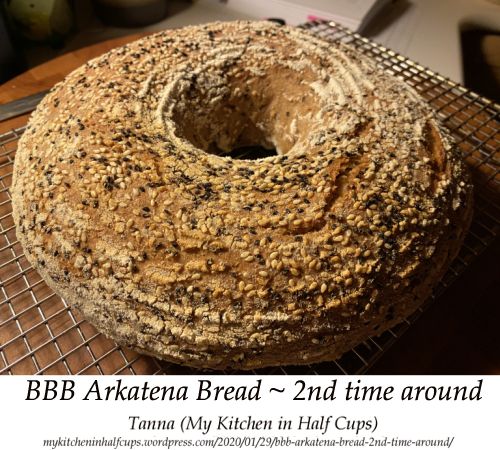 I’m thinking this chickpea starter might be more sensitive to temp than wheat starters we’ve done before.

I have never taken the temperature of water or dough … until this time. We set the thermoeter in winter at 66 during the day and 62 at night. This recipe seemed to harp on the idea that everything should be working at 80-81°. For whatever reason, I got curious after day 3 and Stage 1: the production leaven. The dough was 76°! Even sitting on that warm spot. The last of the stretch and folds went into into the oven with the light on and also the last rise in the shaping basket covered with a shower cap. The dough was coming in at 79° and feeling lighter with each rest and rise.

I think Tanna must be right about the importance of paying attention to the temperature aspect. I really thought that using our oven with only the light turned on would do the trick, but then I realized that on my second disastrous attempt at making Arkatena bread, we played a little fast and loose with when the starter and/or so-called leavener (in our house) was actually in the oven with only the light turned on, rather than spending several hours on a rack on top of the stove (in our rather chilly kitchen, which is generally 14-17C in winter) because the oven had to be turned on for something else.

Perhaps I’ll try Arkatena bread again in the summer when we don’t have to rely on the oven with only the light turned on for keeping things warm. I somehow doubt that wrapping the bowl in a scarf would have done any good at all at this time of year (…the hazards of living in a century-old house).

Of course, if you haven’t made the bread yet, just because the deadline is past, I hope that won’t stop you from making it. Because it’s delicious. nd, as Tanna will attest, it’s dead easy!

Thank you to all who embraced the challenge to bake Arkatena bread. 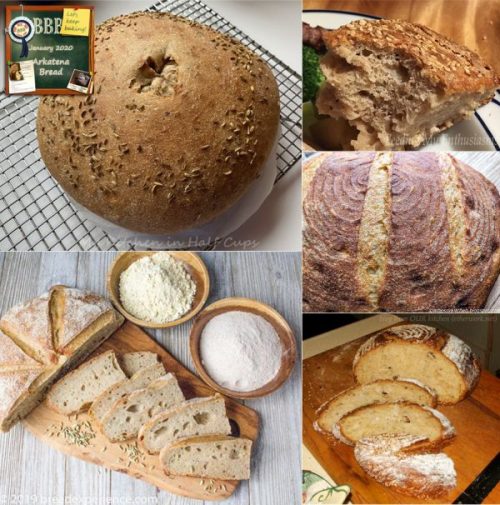 clockwise from top left: Tanna (My Kitchen in Half Cups); Elle (Feeding My Enthusiasms); Kelly (A Messy Kitchen); Elizabeth (blog from OUR kitchen); Cathy (Bread Experience)