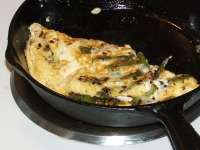 Last weekend, we had some left-over asparagus from the evening before and decided to use it to make an omelette. (I know. How can there be left over asparagus?!)

The garden chives, while not flowering, have been flourishing. And there’s nothing better than spring chives and eggs, don’t you think? As I was getting the eggs out of the fridge, I grabbed the goat’s cheese and havarti at the same time. And we went to town.

Oh for the long lost days of EoMEoTE! Because I have the perfect entry.

But wait a minute!! What am I saying? I’d probably have to write an ode in Terza rima in order to be eligible for the roundup…. Hmmm, could I even begin?? Let me see… what rhymes with “asparagus”?

Oh for the long lost days now covered in dus’
When opus, ovum and panis tostum were wed
For then I’d praise the wondrous asparagus!
Alas those times are now long dead.
And though the hens still lay their eggs
Blog posts re eggs and toast’ve all been said
Nothing left, not a drop, only dregs
Indeed I do believe it’s all been wrote
Shall we raise a glass and say a toast?
So long, farewell and fond adieu to EoMEoTE

Yikes!! Okay, okay, I know. It doesn’t even scan. That’s clearly enough of THAT! Allow me to get back on track:

Here’s what we did to create our asparagus omelette extravaganza: 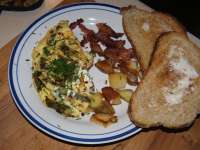 Rats!! We had asparagus last night again but somebody (don’t make me write the name! Suffice it to say that it begins with E…) ate it all so there isn’t any left over to make an asparagus omelette for lunch!