summary: recipes for hummus (based on a recipe in “Mediterranean Street Food” by Anissa Helou) and pita chips; information about My Legume Love Affair, Two For Tuesdays! (Real Food) and Yeast Spotting; (click on image to see larger views and more photos) 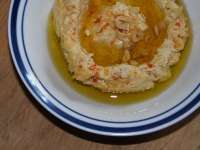 Since January, I have been meaning and meaning to post about hummus. I absolutely adore hummus but until this year, we had never succeeded in making really good hummus. And then we got Anissa Helou’s really wonderful book “Mediterranean Street Food”.

Hommus is now part of the global menu, sold in most Western supermarkets neatly spooned into hygienic plastic tubs with trendy labels. But when hommus is sold on the streets in Syria, it is squeezed into plastic bags […]. Not perhaps the saftest way to package such a creamy concoction but an amusing one. – Anissa Helou, Mediterranean Street Food, p.68

Following that is a clear, easy to follow recipe. And our search for really good homemade hummus was over. This hummus is fabulous!!

It’s SO much better than any of the commercially purchased hummus we’ve tried. Not to mention that it’s much less expensive when made from scratch.

However, we really couldn’t resist trying again, especially because there have been so many other recipes in Anissa Helou’s cookbook that have been really excellent: chickpea soup with harissa and croutons, sesame twisted rings, Moroccan-style chicken with preserved lemons and oil-cured olives, fuhl, za’tar, etc. etc.

We had already learned the following when making chickpea soup with harissa and croutons ( for MLLA #19):

If your chickpeas WON’T get soft no matter how many hours they are cooked, use a little baking soda in the soaking water!!

We have a tendency to play fast and loose with recipes, making automatic changes as we read. But in view of our less than thrilling hummus-making history, we decided we’d follow Anissa’s instructions to the letter. She wrote:

Sprinkle the raised edges and center with paprika, and trickle a little olive oil in the dip in between the whole peas. – Anissa Helou, Mediterranean Street Food, p.68

Our immediate question was “what whole peas?” But there is no earlier mention of setting some of the chickpeas aside before pureeing them. Is this what is intended? Are there supposed to be a few whole chickpeas in the bowl?

Obviously, we knew we could just go ahead and try the recipe without clarification but we thought we’d take a shot and ask Anissa.

[…] I guess it must be an editorial mistake. You could use whole chickpeas to garnish the hommus, usually piled in a mound in the middle but I don’t do this any longer. I just sprinkle paprika or Aleppo pepper and drizzle olive oil in the dip. Here is a picture of how it looks when I serve it. Enjoy.

Of course, we had suspected all along that it was a typo but it was very handy to have it confirmed. And indeed, we have enjoyed the hummus. Tremendously. Many thanks again, Anissa.

In spite of saying that we were going to follow the recipe to the letter, I confess that we’ve strayed a little by caramelizing some extra garlic in olive oil to use as a garnish with the olive oil. Also, instead of paprika, we’ve sprinkled sumac on the hummus. And other times, we’ve omitted the sumac entirely and chopped some parsley to use as a garnish rather than sumac. When we didn’t have any parsley, we used coriander leaf. All ways are delicious – frankly, there is little flavour added by anything but the olive oil and caramelized garlic. The other things are more for looks (we think hummus is a little bit bland looking on its own).

The first few times that we made hummus, we served it with pita. Then one day, we didn’t have any of our pita in the freezer and didn’t feel like making any (gasp! how lazy!!) because we wanted to eat the hummus NOW. So we bought pita from the store. It looked like pretty good pita but not quite as good as ours. T had a brilliant idea for rescue. Turn it into pita chips!

The pita chips worked out so well that I chose to take chips rather than fresh pita triangles to a potluck one evening. Not surprisingly, virtually all the hummus and pita chips disappeared. As one of my friends tasted the hummus, she said with surprise, “Ooh!! This is better than mine. This is really good.” I asked her if she used canned chickpeas in hers. Her answer: “Yes”. 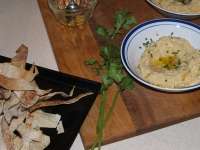 Serve at room temperature with pita or pita chips. 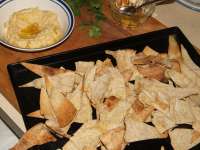 So the triangles remain crispy, allow them to cool completely before storing in a tin.

» To ensure that the chickpeas soften in the cooking, Anissa Helou suggests adding a bit of baking soda to the soaking water for the beans and then to rinse the beans well before cooking. However, Sally and Martin Stone in their book “The Brilliant Bean” say: “Do not add baking soda (sodium bicarbonate) to the cooking water as some cookbooks recommend. […] Baking soda can actually toughen beans – as does salt – if added to soaking or cooking water. It also destroys some valuable nutrients. […] Baking soda adds so much alkalinity to the water that it affects both flavor and nutrient content adversely. Cell wall hemicelluloses are more soluble in heavily alkaline water. The resulting loss of cell wall material allows nutrients to be leached out of the beans and escape in steam or when the soaking or cooking water is discarded.” We have found that with dried chickpeas, especially if they are older, the baking soda is essential.

Canned beans can be used but the result is not quite as pleasing. Drain and rinse canned beans first. The liquid in canned beans is often a bit stinky, murky, and oversalted.

» Anissa Helou suggests sprinkling the hummus with paprika or powdered aleppo pepper rather than sumac and caramelized garlic.

» Making pita chips out of stale or storebought pita will rescue the bread, making inferior pita completely palatable, if not downright delicious.

Oooooh, I just thought of something. I bet barbecue-baked pita turned into pita chips would be great. Hmmm, is it time for more hummus? Excuse me while I go to wash some chickpeas….

My Legume Love Affair (MLLA)
Susan (The Well Seasoned Cook) created this event to celebrate and expand our legume repertoire:

This month, Diana (A Little Bit of Spain in Iowa) is hosting MLLA. She wrote:

Your choice of recipes is very broad. […] All courses and cuisines (vegetarian/vegan/non-vegetarian) are welcome, as long as legumes are the dominant ingredient. (Please note: In France, vegetables of all sorts are known as légumes. They are not included in this event.)

And yes, once again, there are two prizes being offered!! Random Drawings from the MLLA#24 post will be taken and the prizes will be:

This event was created by Alex (A Moderate Life) with the idea that each “Two for Tuesday” post would contain two things (two recipes, two links, two variations on a theme… as long as it’s about real food. Heather (girlichef), Beth (bethstedman.com), and Michelle (Health Food Lover) have joined forces to co-host the event. Heather wrote:

For complete details in how to participate in “Two for Tuesdays! (Real Food)” please read the following: