[rant-alert]Yup. It’s about flour again. This time the excessive ranting and raving is about how ludicrous it is to be buying “no additives” Atta (as good as it is) that comes all the way from India, when wheat is a major product of Canada.[/rant-alert]

summary: reasonably priced atta WITHOUT additives in Toronto; comparison of various brands; chapatis made with atta are fabulous; is there really a need for Canada to be importing wheat? (click on images to see larger views and more photos) 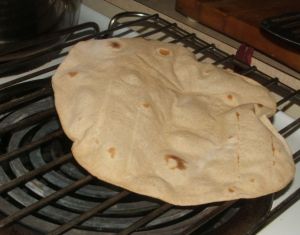 When the BBBabes were making chapatis, in her tips to the BBBabes, Aparna mentioned that for best results, we really should try to be using atta. It has been a while since we bought atta (so long ago that I don’t remember what brand it was). As I recall, we weren’t overly thrilled with the chapatis we made with it – but those were early days and I was only just beginning to make bread at all. It seems to me that we had to throw the last of the atta out because it went rancid.

Aparna suggested the Aashirvaad brand. I really didn’t think we’d be able to get it here in Toronto. After all, it’s from India! But lo and behold, there it was, not just at the Indian supermarket but at the No Frills supermarket as well.

We waffled about buying it.

As you can see, the pros outweigh (just) the cons. But really. There is no good reason that “no additives” atta is not readily found in Canada. Is there?

After all, it’s not as if atta is anything particularly exotic.

Atta is Indian whole wheat flour used to make flatbread such as chapati, roti, paratha or puri. Traditionally fresh Atta were prepared at home by grinding wheat in homemade stone grinder known as Chakki. Atta has high fiber content due to high bran and also has high in gluten thus its doughs can be strong and rolled out very thin.

Atta consist[s] of all parts of wheat grain. It has bran, which contains fiber and other nutrients (vitamins B, iron, magnesium, and phytochemicals), endosperm, which contains carbohydrate, and germ, which consist of vitamin E and polyunsaturated fat, remain. Atta is considered healthier than Maida, which has endosperm only, thus rich in carbohydrate.

Wheat (Gehun) is used to make Atta […] In India Hard red, Hard white, and Durum are used to make Atta. Soft white is used to make Maida and Pastry flour. The hard wheat classes are really semi-hard in comparison to Durum. […] Chakki milling in India is almost same as Stone milling in the western world. […] Atta is made from hard Gehun (Indian Wheat) or Durum. Milling process (cracking) results in high starch damage suitable for water absorption to make dough. The milling process also minimizes loss of Ash.

Aashirvaad Atta was launched on 27th May 2002 and within a short span has become the number one in branded packaged atta across the country. Aashirvaad Atta is made from the choicest grains – heavy on the palm, golden amber in colour and hard in bite. It is carefully ground using modern ‘chakki – grinding’ process for the perfect balance of colour, taste and nutrition which also ensures that Aashirvaad atta contains 0% Maida and is 100% Sampoorna Atta. The dough made from Aashirvaad Atta absorbs more water, hence rotis remain softer for longer.

A special blend of untreated white flour and fine bran, similar to 60% Whole Wheat. Ideal for making chapatis and roti.

• No Chemical Additives
• No Bleaching Agents
• No Conditioners
• No Preservatives

– rogersfoods.com: The Goodness of Whole Grains 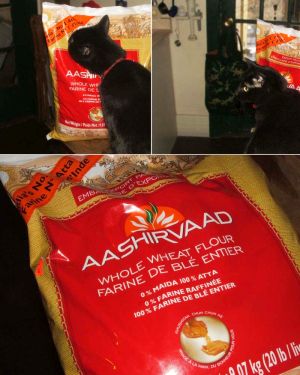 We stood there at the Indian supermarket, deliberating. And we finally decided that it was worth the experiment. Along with some beautiful red chilis and spinach (for palak), we hauled the 9 kilo bag of Atta to the cashier’s counter, rewrapped ourselves in our multiple scarves and mittens, hauled the groceries out to the bikes and shuddering in the -17C wind, strapped the bag of flour onto the back of T’s bike and headed home.

And about an hour before dinner, after the furry black fiend had finished thoroughly examining the outside of the atta bag, I mixed chapati dough. With atta. 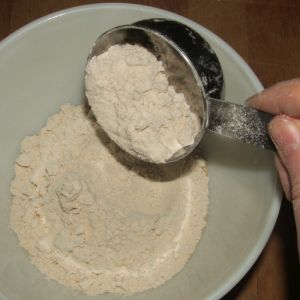 Atta is very finely milled – it almost looks like cornstarch – it literally sucks up the water. I carefully poured in just some of the water. I didn’t want a soupy mess, after all. I stirred – or rather, tried to stir the water in with a wooden spoon. But I might as well have been stirring dry flour.

I splooshed in more water, worried it might be too much.

Once there was enough water mixed in, the dough was almost immediately smooth. But I know that for good chapatis, the gluten has to be developed; the dough must be kneaded for about 10 minutes. So I kneaded it in the air and when I got bored after about 5 minutes, I put it on the board to knead some more.

Again, I was amazed that I didn’t have to use ANY extra flour! 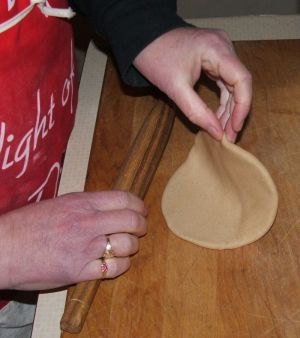 Once the dough had rested, we started to make the chapatis. I was amazed that for rolling no flour was required on the board. The dough refused to stick!

I kept rolling out the discs, lifting them easily off the board as I rolled, exclaiming.

Cooking was a breeze and the chapatis were amazingly soft. But almost immediately after being put on our plates, the chapatis hardened to become like delicate crackers. They were delicious but the cracker quality was a little disappointing. 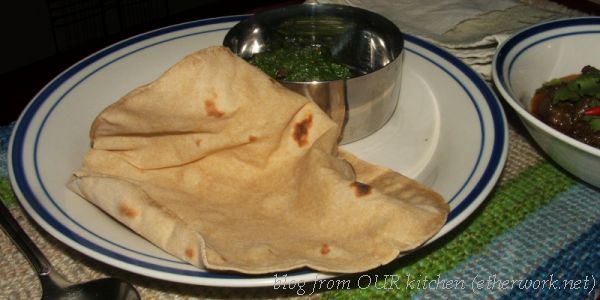 After consulting with Aparna (isn’t the internet wonderful?!), we tried again. This time, I added a little more water to the dough (so much that I had to use a little flour when rolling the chapatis out so they wouldn’t stick to the board). And we put the tava directly on the burner rather than having it sit on the rack.

That did the trick! 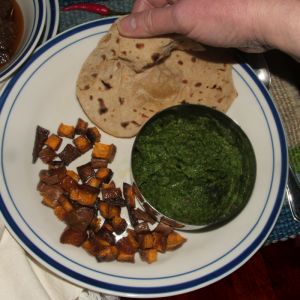 The chapatis were perfect! Once again, they were amazingly soft. But this time, they stayed amazingly soft throughout dinner. The palak made with rapini was equally wonderful. Oven roasted sweet potato was a delicious extra to go with a fabulous curry made with stunningly beautiful red chillies.

It turns out there’s a good reason that Indians prefer to use atta to make chapatis….

But. What to do. What to do. It really doesn’t make sense to be buying flour that comes all the way from India. Especially when you consider that Canada produces so much wheat that in Europe, bread flour is called “Manitoba flour”.

And yet, it looks like our only viable local alternative is “Golden Temple”, produced by the USA-based conglomerate Smucker – the same company that swallowed up Robin Hood and Five Roses and then spit out new “improved” versions of RH and FR flours.

If only I could allow commenting again, so you could tell us what you think our best option is.

edit 25 February: I finally have commenting allowed again! Whoohooooo! (read more here about the hoops I jumped through)

4 responses to “Which Atta Should We Buy? What a dilemma!”