summary: comfort food: baked squash with cream and cheese inspired by a recipe in “The River Cottage Cookbook” by Hugh Fearnley-Whittingstall; 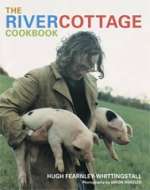 We came across this idea in the wonderful book we’re reading now: The River Cottage Cookbook (another of the lovely books added to our shelves this Christmas) by Hugh Fearnley-Whittingstall.¹

Fearnley-Whittingstall is a confirmed omnivore and clearly loves meat. But the book starts with vegetables. And how… (literally too; there is a large section on how to grow as well as how to select, buy and cook the various vegetables).

I firmly believe that any cook who thinks that vegetables are the least interesting part of the meal, a bore to prepare, and a mere adjunct to meat or fish is missing the point. As far as I’m concerned, vegetables are staple, central, the main thing. […]

I think of fruits and herbs as essential luxuries: joyous ingredients I would never be without. Whereas vegetables are luxurious essentials: the primary building blocks for most well constructed meals that I could not be without.

This isn’t a new notion for us, by any means. The idea of making the vegetable dish a central aspect to the meal is what Alanna Kellogg (A Veggie Venture) is all about as well. And we have happily perused her site in search of new ideas for vegetables. ²

But it’s always nice to see a confirmed carnivore like Fearnley-Whittingstall extolling the virtues of vegetable eating. It’s similar to Michael Pollan’s argument to “eat more plants” made in his books In Defense of Food and The Omnivore’s Dilemma. And the great thing is that unlike Pollen, Fearnley-Whittingstall offers fabulous ways to go about eating more plants. Because, of course, the book is a cookbook….

There are a number of vegetable recipes we bookmarked. But when I read about his baked pumpkin with cream and cheese, I had to have it NOW. He cuts his pumpkin in two so that the top part can be used as a lid. Then he scoops out the seeds and pours a mixture of cream and grated Gruyere cheese into the cavity, puts the lid back on top and bakes the pumpkin. And then serves it hot “with spoons to scoop out the flesh […] and the creamy, cheesy liquid (the Gruyere comes out in lovely long, messy strings)”. (see the actual recipe)

We didn’t have any pumpkins (it’s the middle of winter!!) but we just happened to have a butternut squash on hand (I bought it in October and had been keeping it in the unheated section of the house by the back door).

I know. A butternut squash is NOT a pumpkin!

Which means that the cavity wouldn’t be nearly large enough to house the amount of creamy cheese that we would want – hogs that we are. So T being the problem solver he is, he cut the squash in two length-wise, scooped out the seeds and put a bit of butter into the cavity then just baked the squash halves open faced, skin side down in our toaster oven til they were fork tender.

We didn’t have any Gruyere either… but we did have some Gouda and some Swiss cheese. So T gently heated some 10% cream in a pan and then stirred in the grated cheese til it melted. And poured it into the two cavities of the squash. And ground some pepper overtop. I added a sprig of parsley to make it look even more beautiful than it was already. (Photos?! You must be joking! You’ll have to take my word for it. Or better yet, make this yourself and see how beautiful it is.)

We served this really fabulous squash with steamed green beans and chicken thighs that had been rubbed with thyme and roasted over sliced potatoes.

Hmmmm, will we have to wait til next fall to try it again? I fear that squashes from the store now are really rather dull and watery.

1. How do you think Fearnley-Whittingstall pronounces his last name? My guess was that it was similar to the technique for the pronunciation of “Cholmondeley” and sounded as [Fərnz'-tl]. But after puzzling for a while, on one of the episodes of Escape to River Cottage, we heard him actually say his name. Unbelievably, it is pronounced exactly as it looks [Fərn'-lē Wĭt'-tĭŋ-stŏl]. Where’s the fun in that?

(Remind me to rave about Fearnley-Whittingstall’s fabulous broccoli with anchovies!!)

2. Alanna Kellogg (A Veggie Venture) started her vegetable venture in 2005, as a month-long project that turned into an entire year. She cooked a vegetable in a different way each day. And blogged about it. She is still cooking vegetables in different ways (but not every day – now she repeats some of her favourites.) I don’t think I remember seeing any posts in which she says “Ewwww, forget that”. And there are several recipes that are simply fabulous (our favourites based on her recipes: beets with capers, cauliflower au gratin, green bean casserole). Take a look at all she has amassed: Alphabet of Vegetables

5 responses to “baked squash with cream and cheese”