Let the sun shine in!

When Cathy told us that this month’s BBBabe bread would be, I immediately knew we would be baking it in the barbecue. The shape is perfect.

And excuse me, but I WAS going to be only one day late with this bread. Really, I was.

We arrived home from camping early Friday afternoon; I was all set to build up our starter to bake the bread in time for lunch on Saturday. But it was not to be:

That’s right. It poured on Friday (but I shouldn’t complain; at least the torrential rains held off until after we had taken down our tent and arrived home!)

But here I am, three days late – better late than never though! 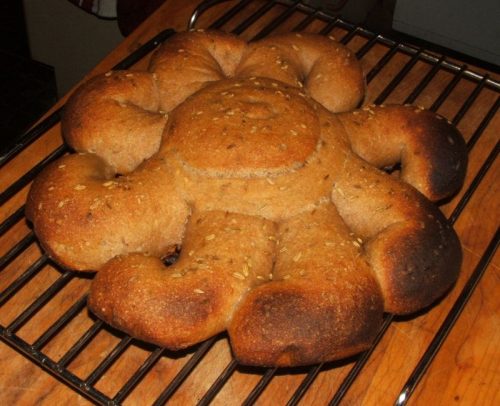 Here’s how things went with making sunshine bread on the barbecue:

12 August 2019, 13:40 We were just given the opportunity to go camping this week and couldn’t say no. We will be arriving home on 16th…. Naturally, in my usual “there’s plenty of time at noon” fashion, I haven’t made the sunshine bread yet. Which means I’ll be a little late.

16 August 2019, 15:21 Home at last. This morning, we had a fantastic breakfast – slices of Tartine loaf brought from home toasted on a fire that we rejuvenated from the embers of the previous night’s fire. We followed the best buttered toast ever with yoghurt and perfectly ripe blood peaches bought from an “honour system” road-side stand not far from the Provincial Park we camped at.

I’m curious; do you think that the farmers have extra money in their little box, or not quite enough? The peaches we bought were listed at $3.75 for a box. We had the exact change; if we hadn’t, we would have put in $4.00. (If we hadn’t had the change, we would have had to go away peachless. I’m not sure that we would have been prepared to put in a $5 bill. But would some people pay the extra? They WERE stunningly beautiful and aromatic peaches.)

We just looked at the weather forecast and see that a.) it is going to be raining all day tomorrow, and b.) the rain is bringing in a warm front. We can’t bear the idea of turning the oven on when it’s already 30C in the kitchen.

17 August 2019, 18:21 Of course it isn’t raining now! And it looks like the rain is done for the evening. Isn’t that always the way? …we could have been baking Sunshine Bread tonight after all!

21:47 I just built up the starter (it still isn’t raining…) and it is now in the oven without even the light on. It’s plenty warm enough in the kitchen for the starter to go nuts over-night.

Naturally, I have already transgressed with the recipe. Instead of using all-purpose flour, milk, and water, I used whole wheat flour and water only. I’ll add the milk in tomorrow in the actual dough.

We had just enough rye flour in the freezer! Well, I’ll tell the truth; that should be “almost enough”; in fact, we were 2 grams short. But, considering that I’ve already transgressed by being late, adding whole wheat flour to the leavener, as well as planning to transgress further by sprinkling with fennel seeds rather than caraway seeds, those 2 grams probably won’t make much of a difference, will they?

13:01 First turn after adding the salt: The dough is pretty sticky! But maybe it will settle itself down as it develops more.

15:39 We couldn’t resist going for a bike ride on the completely closed to vehicular traffic on Bloor and Yonge for “Open Streets TO” this afternoon. It was wonderful to ride freely, beside happy pedestrians. At one point we stopped to watch a demonstration of Azerbaijan dancing. Very cool!

When we got home (just a few minutes ago) the dough had pretty much doubled. I folded it down and – yay!! – there is zero sign of stickiness. It feels wonderful.

16:54 Time to shape! Fingers crossed that I get it right!

17:03 Look at me, reading the notes BEFORE I go into the kitchen!

Place the ropes in a circle on a large baking sheet (See notes on using a greased baking sheet), spaced evenly apart. They should look like rays of sun. Curl the ends around, leaving a slight gap in the middle for the center spiral. – BBB August 2019 recipe

17:47 Hmmm. That’s a pretty rustic looking sun I’ve created; it’s looking a little like a child’s depiction of the sun. Not that there’s anything wrong with that. 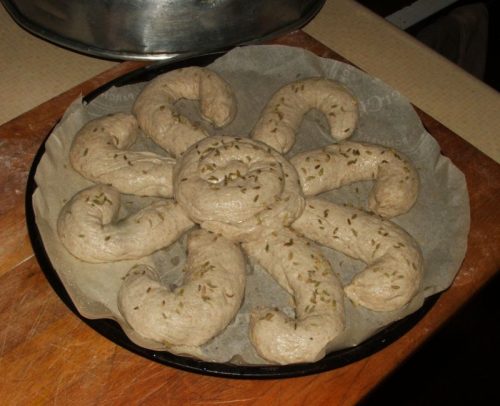 And oops!! Look at me, not paying any attention to the notes until after the fact.

I tried shaping the larger loaf on parchment paper, but the dough stuck to it, and the rectangular shape of the parchment didn’t lend itself to the shape of the loaf. It wasn’t wide enough for the rays to fit on. I used a greased baking sheet instead and it worked much better. For the smaller loaf, the parchment worked fine. – Cathy, notes on BBB August 2019 recipe

Maybe everything will be okay. I put the parchment paper on a pizza pan before doing any shaping at all. 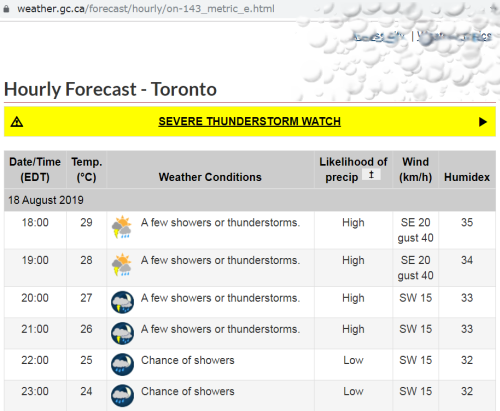 18:26 They were rain clouds! It’s pouring. I sure hope it’s short-lived. I hate the idea of turning on the oven today. It’s starting to be poisonously hot right now!

Naturally, there was nothing at all like this in the forecast yesterday…. 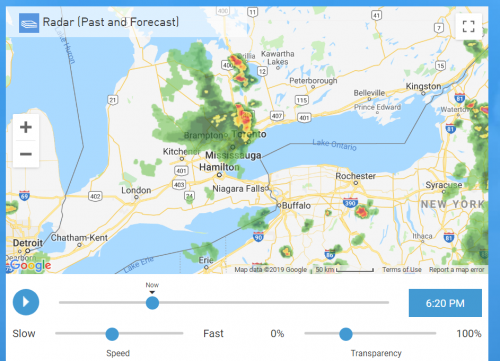 19:10 The rain seems to be stopping. Yay! We can bake in the barbecue after all. …good thing this bread dough is nicely slow to rise.

19:59 The bread looks great. Even though it’s a little charred in places because we baked it in the barbecue. 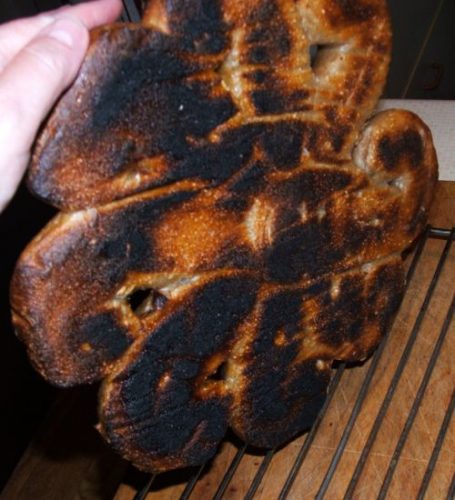 And sure, it’s not exactly sun-shaped. It looks more like a child’s depiction of an octopus. But that’s perfect really.

We’re serving the bread tonight with a Catalan dish made from a long bookmarked recipe in SAVEUR no.106 (November 2007): Mandonguilles amb Sipia i Gambes (Meatballs with Squid and Shrimp). Except we didn’t add any squid – mostly because we didn’t have any. The not-quite-sun shaped bread can be the substitute for the squid.

(Remind me to rave about this fantastic stew made with Picada!)

Happily, we already know that our box grater can rescue charred bottoms on bread. 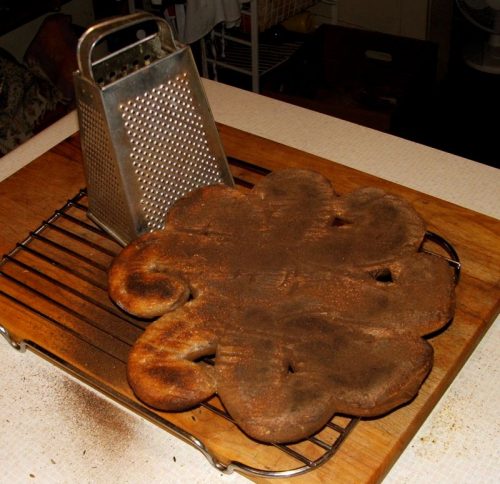 It was even more stunning when mopped up with the BBB bread. Fennel seeds were the perfect substitute for the caraway. Although, I’m guessing that caraway might go well with this Catalan stew too.

Many thanks for choosing this Sunshine Bread, Cathy. With fennel OR caraway seeds, it’s a keeper!

Here is the BBB recipe for Sourdough Sunshine Bread that we were given. And here is what I did to it:

Wild Sunshine Bread
adapted from a recipe in “BREAD: the breads of the world and how to bake them at home” by Christine Ingram and Jennie Shapter

This splendid table centerpiece is made with a blend of rye and white flours, the latter helping to lighten the bread.

– Christine Ingram and Jennie Shapter, BREAD: the breads of the world and how to bake them at home

Serve the bread warm or room temperature with soup or stew. And butter. Or olive oil. If you like.

Leavener: The leavener was made with a 100% hydration whole wheat starter. It takes about 5 days to create. It resides in the fridge after that – our starter has been happily bubbling away and raising fabulous bread since July 2017. (Please see our take on Jane Mason’s Natural Starter made with Wheat Flour.)

Fennel Seeds: The reason we chose fennel seeds over the caraway seeds called for in the BBB recipe was because we were going to serve the bread with a Catalan-style stew. After searching the internet and our cookbooks for typical Catalan spicing, we decided that fennel seed would work best.

We LOVE this bread! We were expecting it to be a little bit dense because of the rye flour. But it was beautifully soft, with the flavour of the rye flour still coming through nicely. 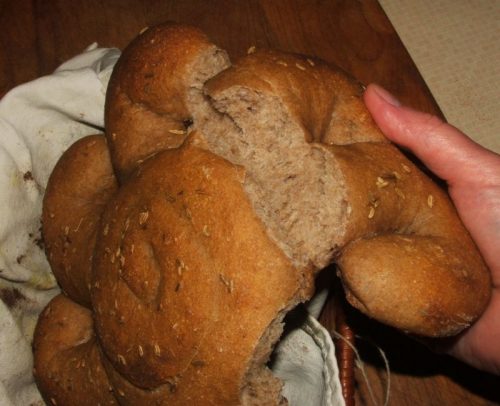 Now that we’ve torn away some of the sun beams (tentacles??), the bread looks like a court jester! Sorry, no photographic evidence though. You’ll just have to take my word for it. 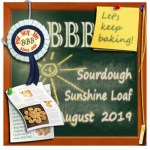 This bread is from the book BREAD: the breads of the world and how to bake them at home by Christine Ingram and Jennie Shapter. This was one of my first bread books. […]

The description for this bread reads, “Scandinavia, Land of the Midnight Sun, has numerous breads based on rye. This splendid table centerpiece is made with a blend of rye and white flours, the latter helping to lighten the bread.” I know it will be hot in August, but I hope you’ll enjoy baking this loaf nonetheless. […] The flavor is wonderful! […] We’ll be using a slightly different formula than what’s in the book. I converted it to sourdough instead of fresh yeast.

– Cathy, in message to BBBabes

We know you’ll want to make a Sourdough Sunshine Loaf too! To receive a Baking Buddy Badge to display on your site: make the bread in the next couple of weeks and post about it (we love to see how your bread turns out AND hear what you think about it – what you didn’t like and/or what you liked) before the 29 August 2019. If you do not have a blog, no problem; you can also post your picture(s) to Flickr (or any other photo sharing site) and record your thoughts about the bread there. Please remember to email the Kitchen of the Month to say that your post is up.

Please take a look at the other BBBabes’ August 2019 Sunshine Bread.