summary: I’m late yet again – so what else is new?; recipe for inside out coconut buns; commercial yeast really wants to make dough rise; opting for savoury over sweet; following (or not) instructions; information about Bread Baking Babes;

Coconut is one of those love-hate ingredients.

It’s true. I am not at all a fan of coconut in sweet things. I may even have been know to spit them out…. Discreetly, of course.

But I love the flavour of coconut in savoury food.

So, when Aparna suggested that we make buns using coconut milk instead of milk, and filling the buns with “a moist and sweet shredded or desiccated coconut based filling”, I admit that I blanched. But then I remembered the really fabulous shredded coconut and peanut condiment that T makes to go on rice with Asian curries. THAT’s my idea of heaven! 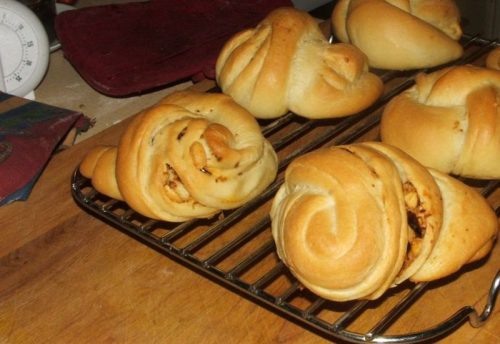 31 July 2022, 15:23 I keep thinking about the filling for these buns and being just a little bit horrified. I confess that sweet coconut cream is one of the last things I want to ingest.

I’m searching for permission to make the filling savoury rather than sweet. Sigh. So far, I have only found sweet fillings.

I keep thinking about a wonderful peanut/toasted chili/shredded coconut condiment we love to put onto noodle soup or as a garnish for rice and curry. I wonder if that would work. If I chop the peanuts finely? And maybe add a few raisins? And perhaps a little coconut oil to hold the mixture together?

Eeeek. I may have to go ahead without permission!

7 August 2022, 09:31 What?! All the milk in the fridge has curdled. None of it is even close to the “best before” date. We haven’t had any power outages (except for a few very brief brown-outs in the middle of the night). It has been poisonously hot though But. How can I have cappucino if we don’t have any milk to steam?! Quel tragedy!

11 August 2022, 14:04 Once again, I have no concept of what day it is, let alone what month. It is clearly summer (thank goodness the heat has broken) but now it’s quite lovely. I really should take advantage of this beautiful weather to make this month’s recipe.

I was just about to translate the BBB recipe into grams. But….

How handy!! Both the BBB and Lisa Lin’s (Healthy Nibbles and Bits) recipes are in grams! Including the salt and yeast. Yay. Yay. Yay.

Oops. Except the coconut milk that we are substituting for actual milk. The BBB recipe calls for “175 ml coconut milk” According to Gourmet Sleuth, this would be 168 grams.

The sugar amount (30 grams to go with 360 grams of flour) seems on the high side to me. And the salt amount seems quite low. Because the savoury filling I’m going to add is on the salty side, I’ll reduce what I think is the correct amount of salt from 6 grams to 5.

13 August 2022, 15:00 This morning, when I was standing on the step stool getting a tin of coconut milk. T asked me what I was doing. I said I was going to use coconut milk in the dough for the buns, he looked ever so slightly disapproving. He said we would go to buy a different “less expensive” brand of coconut milk.

We just got back from the supermarket, where I was relieved to hear from T that the coconut milk we bought for the buns (50 cents less than the “expensive” one in the cupboard) is still completely decent. AND we got points for buying it!

15 August 2022, 18:00 I mixed the dough this morning at around 10. By a little after noon, it was already pillowing up wildly in the bowl. I cannot believe how active it is! I just kept pushing it down in its bowl, determined not to shape it too early.

I completely forgot that I was going to add a little bit of vital wheat gluten to make our all purpose flour mimic bread flour. It really doesn’t seem to matter though. 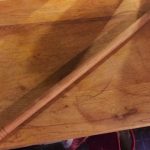 I used our new Turkish dowel to roll out the dough. It is now my favourite rolling pin! I love the length and the light weight.

Shaping the buns was a bit of a challenge because of the peanuts in the filling. I had meant to chop them up a little more, but then got lazy. This meant that I only managed to twist the first of the rectangles before knotting it into a roll. The filling kept trying to escape!

With the other five, I just kind of winged it and manipulated each rectangle into a really bad granny knot, trying not to lose the filling.

15 August 2022, 18:47 Wow! Wow! Wow! The buns look beautiful. I cannot believe how much loft they got in the oven. They were already significantly larger in the rise after shaping. They are easily half as large again! And they smell fabulous!

Initially, I had decided I wasn’t going to bother brushing the buns with an egg or milk wash, but because there was some coconut milk left over from the tin, I used some of that. I can’t wait to taste them tomorrow! 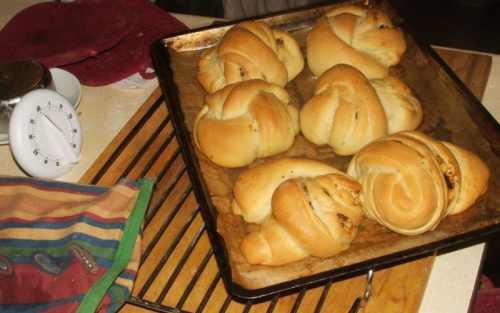 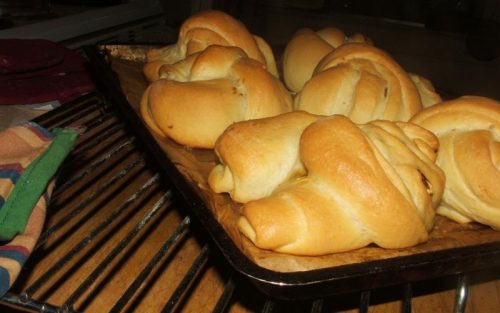 Yesterday morning, we heated one of the buns and each had half. We love the savoury filling. I must admit that I was surprised that I didn’t really taste the coconut in the crumb though. T was surprised to learn I didn’t; he said they were quite coconutty.

And. He is in heaven, getting to have his favourite all white bread…. 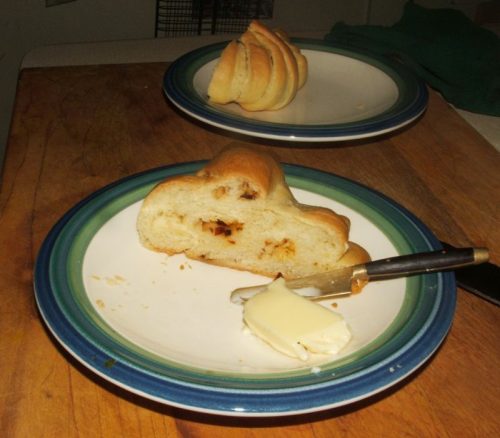 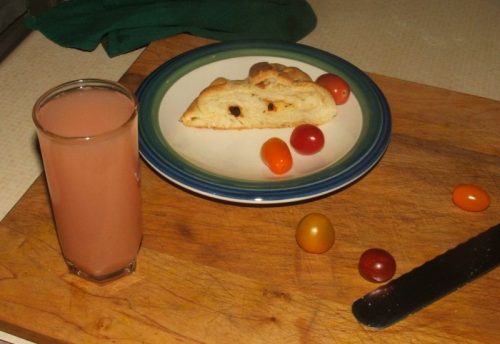 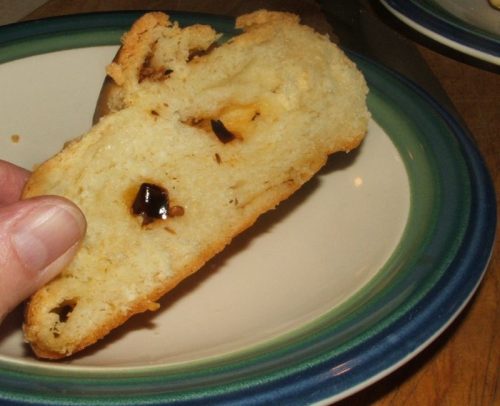 Thank you, Aparna. This was really fun! This bun recipe is a keepers.

Here is the August 2022 BBB recipe that we were given. And here is what I did to it:

:: Butter: We realized, as we were tasting the buns, that I could have used coconut oil instead of butter in the dough! Next time, I’ll try that.

I just couldn’t face the idea of sweetened coconut. I also didn’t want to substitute with jam, or custard, or something that would make the buns seem pretty much like Danishes, or what my friend calls “squishies”. In a nod to the fact that Chinese buns seem to be traditionally very very very sweet, I made sure that raisins were included in the peanut chili mixture.

:: Cayenne Pepper in the Filling: Alternatively, you can pre-toast chile flakes: In a cast iron frying pan, dry-fry plenty of chili flakes until they are quite dark. Note that the fumes are very pungent! We try to do this in the summer time with all the windows open and/or on the barbecue. After the chili flakes have cooled, we put them into a covered glass jar and keep it in the fridge. They lend a lovely smoky heat to Asian or Middle Eastern dishes. They are a great alternative to freshly ground pepper to add heat. Toasted chile flakes can be substituted for the cayenne pepper in the filling recipe. Simply add them after the wok has been removed from the heat.

:: Shaping: Next time, I’ll make sure that the peanuts are crushed a little more finely so that the filling doesn’t want to escape as I twist the dough before knotting it.
The process of scoring and twisting the dough into hypnotizing spirals is an easy and creative way to form buns. Through the scores, you also catch a glimpse of the sweet filling.

– Kristina Cho, Mooncakes and milk Bread
Grab a hold of the short ends of the dough and twist it several times. Then tie the twisted dough into a knot […]. Transfer the knotted dough onto the lined baking sheet.

Last night, with left-over butter chicken, palak paneer, barbecue-wok’ed green beans/Swiss chard/potatoes, radishes, and beet/cucumber raita (remind me to rave about this!), we served inside out coconut buns. Normally we would have had the dinner with naan. Well. It turns out that even though coconut buns are very very rich, they are just as delicious with dinner as naan. (T added the last little bit of tinned coconut milk to the butter chicken. Because, why not?) 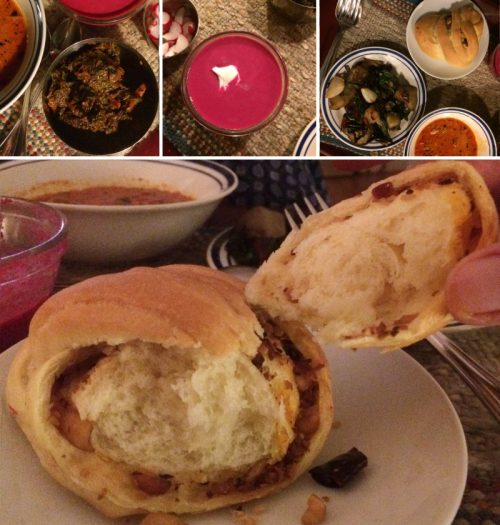 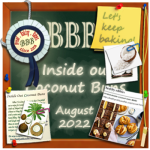 Inside Out Coconut Buns

[W]hat I’ve done for August is that I’ve picked out a recipe for Inside Out Coconut Buns. […] Traditionally, Chinese or Hong Kong Cocktail Buns are soft milk buns with a moist and sweet shredded or desiccated coconut based filling. They’re sort of small sausage shaped buns with dough stripes on them. These Inside Out Coconut Buns are another version of them. They’re pretty much the same but shaped such that the filling shows on the outside in layers or stripes.

– Aparna, in message to BBBabes

We know you’ll want to make these delicious buns! To receive a Bread Baking Buddy Badge to display on your site: make steamed buns in the next couple of weeks and post about it (we love to see how your bread turns out AND hear what you think about it – what you didn’t like and/or what you liked) before the 29 August 2022. If you do not have a blog, no problem; you can also post your picture(s) to Flickr (or any other photo sharing site) and record your thoughts about the bread there. Please remember to contact the Kitchen of the Month to say that your post is up.

Please take a look at the other BBBabes’ June 2022 bread: 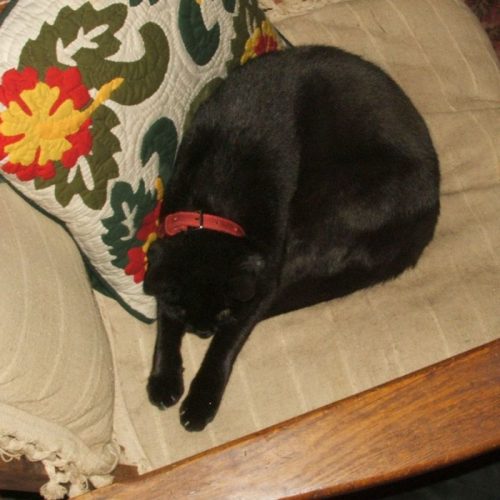 At last, the furry black fiend is bowing down to us

5 responses to “Savoury Inside Out Coconut Buns (BBB August 2022)”