Oh boy!! Snow! (I’d like to pretend that that’s why I’m late posting, but it’s not. It’s just my usual inability to plan ahead.

Does it count that I’m ALMOST on time?) 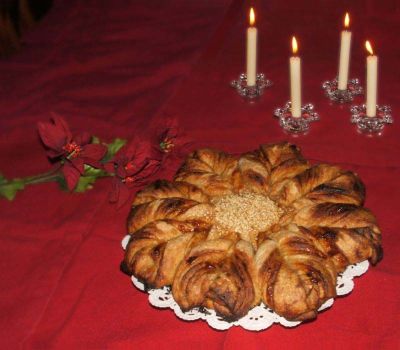 A while back, I saw the most beautiful loaf that had been baked by a number of different bakers in the Facebook group, “Artisan Bread Bakers”. I immediately made a mental note to make one just like it.

And then I forgot about my mental note. (There’s a big surprise.) Luckily, Cathy didn’t forget and decreed that this would be the BBBabes’ December challenge.

And even though the resulting bread is lovely, so much angst has gone into it that I find myself not enjoying it quite as much as I should.

It didn’t help that my webhost had to take my blog offline. Again. But let us not speak of that now. At least the rest of the site is intact. And by a miracle, the blog has been returned as of sometime after 19:00 on Tuesday. (I hope I didn’t jinx anything by saying that!)

So, without further ado, here is how things went with this month’s BBBabe bread:

Oh oh. We are weird and have deep aversions to Nutella. Hmmm… what to do, what to do.

14 December 2014 13:55 Karen said she was thinking about using minced onions instead of nutella… mmmm, that sounds awfully good.

I still haven’t decided what will go in the center of this – whether it will be savoury or sweet – but I’m going to make it tomorrow. I’ll make the starter tonight – with WAY less yeast….

I’m so pleased with myself; I managed to read (and retain) that the starter for this recipe is only supposed to be fermenting for an hour.

I am so annoyed though. My blog is being nailed AGAIN (

) and my webhost had to disable it. It’s infuriating…. I’ll have to figure out where I’m going to post about this bread.

23:51 As I was heating up the water for the starter, I suddenly decided to use whole wheat flour instead of all purpose flour.

Initially I was going to use 0.25 tsp yeast. But I halved that to drastically reduce the amount of yeast. Fingers crossed that everything will turn out.

I’m just looking at the recipe again. THREE EGGS??! I don’t think so. (Heh. But we’ve been through this before in October with the BBB Caramelized Onion Bread and in March with the BBB Water-Proofed Bread, haven’t we?)

I’m going to substitute some of the eggs with ground flax and baking powder….

There’s quite a lot of butter in this. Hmmm, should I be adding more yeast too?

15 December 2014 10:00 Of course, I completely forgot that I was making bread today. What a good thing it is that I put the starter in the oven with only the light turned on. When I went to turn the light off, I noticed the bowl. [Duh…]

But mixing the dough at 9am isn’t too too late. I hope.

Heh. I just remembered that I’ve played fast and loose with the yeast amounts too.

Anyway, I ground flax seeds, melted butter, weighed flour and salt and mixed the dough together. Wow. It’s very dry! I can see why Cathy said to add 1-2 tsp of water if necessary “to form a smooth dough” . I was thinking maybe even another quarter cup of water. And then I noticed that the egg was still on the counter.

I was right. Another quarter cup of liquid was all that was required. The dough is beautifully silky and is now back in the oven with only the light on. I sure hope I added enough yeast….

Oops!!! Well. I had planned to reduce the amount of sugar anyway. Maybe not by quite so much …I was going to put in a tablespoon.

17:21 Errmmm. I wonder if I’ll ever learn to plan ahead. Around about 14:00, the dough looked almost ready to shape. But we had to go out on our bikes. So I pushed the dough down, remembering Julia Child saying “you are the boss of that dough”. I was a little concerned that the oven with only the light turned on might be too warm so I left the dough out on the counter.

Big mistake. It’s not even close to being ready to shape.

20:09 Rolling out each layer was very easy and quite pleasing. At first, I was going to use up the apricot jam we had in the fridge. But {SHRIEK} there was fur on the sides of the jar.

So, in a sudden change of direction (not very much change, granted) I grabbed the tart plum jam jar and slathered it liberally on each layer – to finish up the jar.

Shaping was mostly fun. It would have been more fun if there hadn’t been quite so much jam to make the layers slip around….

16 December 2014, 12:39 The shaped bread took forever to rise – I just took it out of the oven. It smells great. It looks pretty good, although maybe a little flat (pictures still in the camera). I think it’s done…. I’m going to bed! We’ll taste it at breakfast. I hope I’ll manage to post by the end of today.

(I’m clearly challenged with bread doughs that have lots of butter.)

17:17 Sigh. I THOUGHT I was going to manage to post today. But it looks like it won’t appear until tomorrow. My blog is STILL offline but I can put a link on the error message to a page in a folder that has nothing to do with WordPress.

I’m headed to a 4tet rehearsal tonight (Haydn will soothe my shattered nerves). 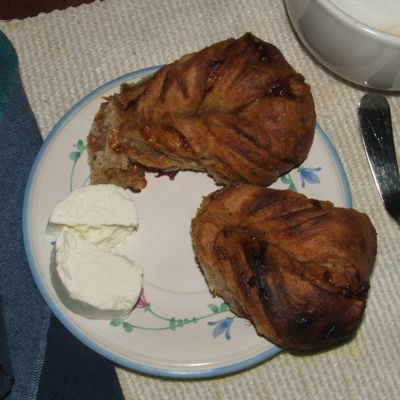 We had the bread yesterday morning with goat’s cheese. And it was delicious!! Many thanks for this, Cathy. I LOVE the shaping!

I’m not sure if I’ll make this again with the egg and butter filled dough though. But I’ll definitely do this shaping again! It’s so easy. And it’s stunningly beautiful too.

Thank you once again, Cathy! 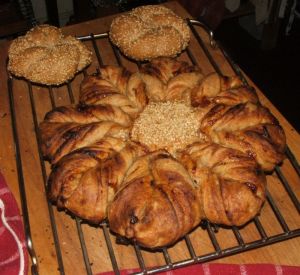 1.) Flour The BBB recipe calls for “bread flour or all-purpose”. I decided to use all whole wheat flour.

2.) Milk and Water The BBB recipe “whole milk, lukewarm 90 to 100 degrees F”. Rather than heating up milk, I opted for using skim milk powder. I decided that there was already going to be plenty of fat in the dough with the butter. And you know what I’m going to say about the water, don’t you? I’ll keep saying it too: please do not use water from the hot water tap. Instead, heat the water in a kettle or microwave. If you are allergic to using a thermometer, you can check the temperature by putting a few drops of water onto your wrist: if it feels warm, it’s too warm; if it feels cool, it’s too cool; if it feels like nothing, then it’s fine. Please note that before the yeast is added, the liquid temperature must be BELOW 120F (49C) because yeast begins to die when the temperature is higher than 120F.

3.) Yeast The BBB recipe calls for calls for “1 1/4 teaspoons instant yeast”. We never have instant yeast in the house; I always use active dry, substituting it measure for measure. But I decided that amount was too much to use in the starter if I was leaving it overnight. Then because the BBB recipe doesn’t not call for any more yeast in the actual dough, I decided to throw in a little. Just in case….

4.) Leaveners The BBB recipe calls for “3 large eggs, slightly beaten” and not one iota flax seed, yeast, baking powder or extra water. But I have a horror of bread with an eggy taste; eggs are not cheap. So I substituted. I know that an egg is roughly 60 ml (0.25 cup) of liquid. But here’s what the internet says about egg substitution:

–Cook’s Thesaurus, Eggs
If eggs are binders in a recipe, it can be replaced with Arrowroot, Soy Lecithin, Flax-seed Mix, Pureed Fruits or Vegetables, Silken Tofu, Unflavored Vegetarian Gelatin Powder (agar agar). The ratio is, for every egg replaced, 1/4 cup of the substitute is used.

If eggs are leavening agents, Buttermilk, Yogurt, Baking Soda […] can be used.

If eggs are added for moisture, Fruit Juice, Milk, Water or Pureed Fruit can be used

5.) Salt The BBB recipe calls for 1.25 tsp sea salt. But we use kosher salt – much bigger grain. I have to weigh it…. (For more information about measuring salt, please see Salt is salt, right?.)

6.) Filling and topping The BBB recipe calles for “Nutella or similar hazelnut chocolate paste for the filling” and icing sugar and “1 tablespoon milk plus 1 tablespoon water for glaze”. I confess that I only just now noticed there was even supposed to be a glaze. But even if I had noticed, I probably would have left it out…. I really don’t like Nutella and didn’t feel like pain au chocolat. So I substituted with plum jam. And at the last minute, I thought it would be fun to put sesame seeds in the center. 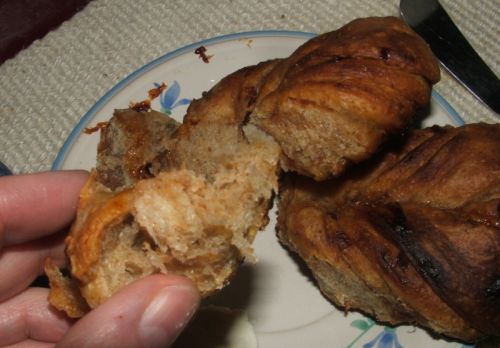 Cathy is our host for December 2014’s Bread Baking Babes’ challenge! She wrote:

I’ve had Nutella Brioche Flower Bread on my list to make for a while and since it’s an enriched dough, I thought it would be a good one for December. It makes a beautiful loaf and […] the shaping is not too hard. It’s called brioche, but the ratio of butter and eggs is more consistent with cinnamon rolls than brioche.

Cathy is right. (Of course she is.) The shaping is not at all too hard. In fact, it’s dead easy.

We know you’ll want to make a brioche flower too! To receive a Baking Buddy Badge to display on your site: make the bread in the next couple of weeks and post about it (we love to see how your bread turns out AND hear what you think about it – what you didn’t like and/or what you liked) before the 29 December 2014. If you do not have a blog, no problem; you can also post your picture(s) to Flickr (or any other photo sharing site) and record your thoughts about the bread there. Please remember to email the Kitchen of the Month to say that your post is up.

Please take a look at the other BBBabes’ December bread:

This is how the back garden looked a few days ago.
(It’s already almost all gone – it rained all day yesterday.)

Please remember to look at my annual Advent calendar (don’t even THINK about peeking ahead). 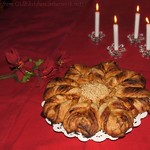 Because of the risk of continued bot hammering, I have had to disable commenting. I have my fingers crossed that the bots will get tired of their idiocy soon.

edit 25 February 2015: I finally have commenting allowed again! Whoohooooo! (read more here about the hoops I jumped through)