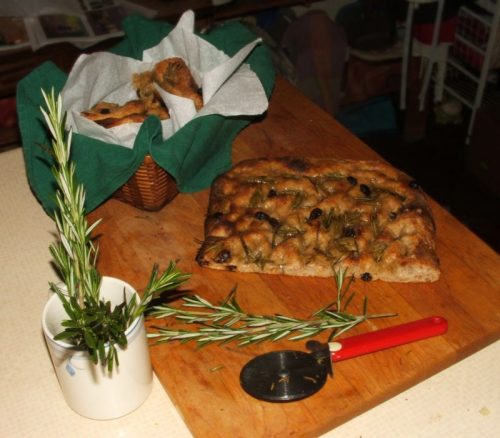 If the bread is intentionally made to be completely flat instead of a loaf, can it still fall into the category of the BBB’s June bread?

Or should I be asking if it is “intensional”?

intension
indicates the internal content of a term or concept that constitutes its formal definition;

Britannica.com
In logic and mathematics, an intensional definition gives the meaning of a term by specifying all the properties required to come to that definition, that is, the necessary and sufficient conditions for belonging to the set being defined.

In my defense – and a weak defense, it is – I WAS going to make Rosemary Raisin sourdough buns. But then, suddenly, the weather shifted for a moment. It was gloriously sunny and warm for a second. We had to use the barbecue to bake the bread! (I know; I still could have made buns. Shhhhhh!! Don’t say anything!)

I’m also going to claim that Judy gave me permission to alter the shape:

Please feel free to change it up, if you wish: different fruit or herb or sweetener. I look forward to seeing what you all do.

Spring has been quite late here and, as usual, our potted rosemary plant from last year died sometime in February. Of course it did… why would this year be any different from previous years?

Here’s hoping I can get a good size small pot of rosemary from the garden centre.

5 June 2019, 10:19am I’m trying to learn to plan ahead and am thinking about making this bread tomorrow! (I know. This is unprecedented for me to be so early….)

I am even reading the recipe to make sure I have all the ingredients!

This is also the only baked good containing raisins that I will eat. The golden raisins add a nice touch of sweetness. – Judy, preface to BBB June 2019 recipe, message to BBBabes

Yay! I do have all the ingredients… (if you can count Thompson raisins as being equivalent to Golden raisins).

While looking at the recipe, my brain started hurting by trying to comprehend “ounces”. I had to alter the recipe to add the gram equivalents (I hope it’s correct that the honey and olive oil measures are ounces rather than fluid ounces):

5 June 2019, 19:18 We’re thinking about turning it into focaccia for tomorrow night’s dinner. I did transplant rosemary in the garden, but it’s very small and just hanging on. It’s still quite chilly at night so we are going to have to buy fresh rosemary. I don’t dare cut any from the poor spindly little plant shivering in the garden.

Recipe can be halved or doubled – BBB June 2019 recipe

I think what I’ll do is quarter the recipe. Except for the rosemary. Just half a tablespoon of rosemary seems on the low side.

And active dry yeast??? Why, if there is so much sourdough starter?

6 June 2019, 08:15 I have been playing with my calculator to quarter the amounts of the ingredients

Suddenly alarm bells are going off about how much salt is called for. A baker’s percentage of 2.7% feels rather high.

And because I’ve already transgressed, I’m also going to add less honey and olive oil into the dough….

14:15 The dough is beautiful! It’s rising nicely and I can’t imagine how crazily it would be expanding if I had added commercial yeast as well! I threw a couple of handsful of raisins onto the dough, covered it put it back into the oven with only the light on. Then we headed out on our bikes to go out again and look at the high water on the lake (the only way to see the break water is to know where it’s supposed to be).

The current water level [on Lake Ontario] is about 82 cm above average for this time of year and […] the water will remain “very high” well into the summer. […] Toronto announced earlier this week that the lake had hit 76.03 metres above sea level — the highest point in recorded history.

On the way home, we’ll get rosemary and salad items for tonight’s dinner.

17:46 We got home about 20 minutes ago. The dough looked perfect! So, I shaped it as focaccia, tossing several sprigs of rosemary on top, covered it with a tea towel, and will let it sit until just before dinner. 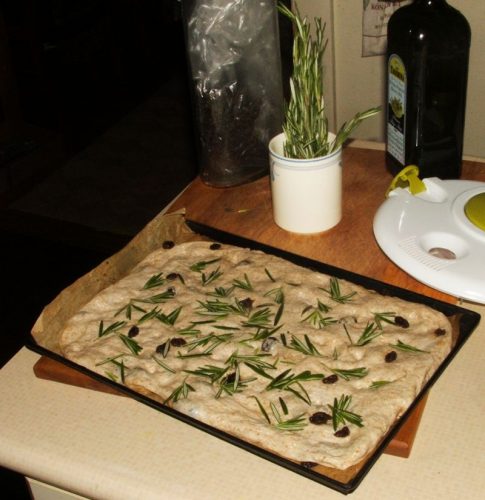 T will take over the baking – on the barbecue, of course; it’s absolutely beautiful outside.

19:51 T is turning on the barbecue. I sprayed the bread with water and dimpled it, drizzling more olive oil on top and scattering some fleur de sel around. How much did I add? I have no idea! 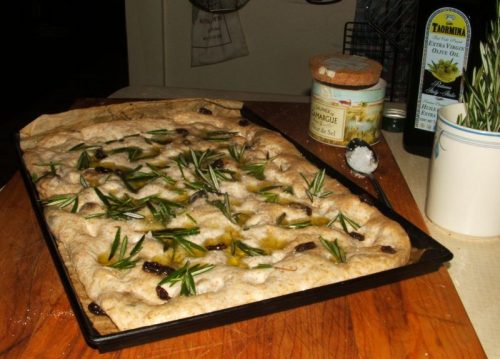 20:13 We sat outside in the garden, gazing up at our beautiful locust tree, that is just starting to leaf – at least 2 weeks later than in previous years. 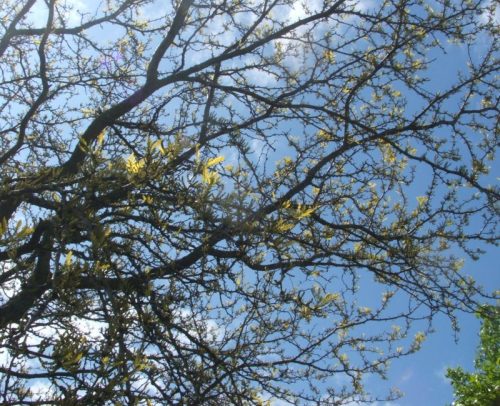 Somewhere high in the tree, hidden by the tiny chartreuse coloured leaflets, a robin sang exuberantly. From time to time, T would lift the lid of the barbecue, saying “it’s puffed up nicely” and “almost” and “look at how nicely golden it’s getting”.

At last it was time for dinner! The bread is a little smaller than I thought it would be. I guess I could have made half the recipe instead of a quarter. But. It’s gorgeous!!

How wonderful to have our first summer-like dinner! We did eat indoors (it’s still a tiny bit cool) but celebrated being able to sit outside in the evening, as we cooked dinner. 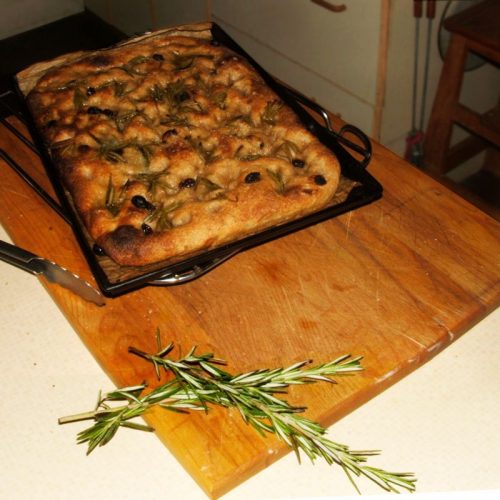 We had a big salad. And Judy’s bread. 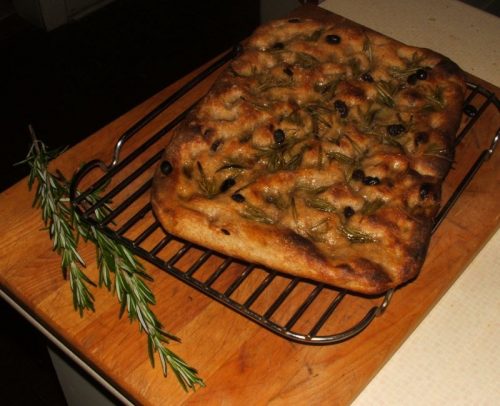 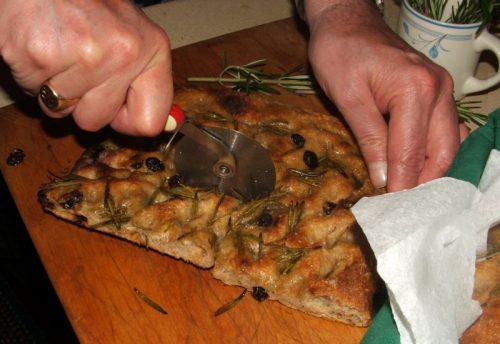 I know we were supposed to turn the bread into a loaf but I cannot imagine it being better than it was as focaccia. This is definitely a keeper.

Here is the BBB recipe for rosemary raisin sourdough bread that we were given. And here is what I did to it:

Cut into squares with a pizza wheel and serve immediately.

flours: The BBB recipe calls for using bread flour and whole grain flour in the dough. Because our leavener is made with 100% whole wheat flour, I adjusted the amount of whole wheat flour for the dough, as well as adding wheat germ, all-purpose flour and vital wheat gluten (to mimic bread flour) in the dough. Because Ligurian Focaccia typically calls for malted barley, so I also added malted barley chops.

yeast: The BBB recipe calls for quite a lot of commercial yeast to be combined with an active sourdough starter in the final dough. Our Jane Mason starter is quite lively these days, so we decided the commercial yeast was not required. (If we had added it, we were concerned the dough would have been voracious and overrisen very quickly.)

leavener: The leavener is made with a 100% hydration starter. It takes about 5 days to create and happily resides in the fridge after that – our starter has been happily bubbling away and raising fabulous bread since July 2017. (Please see our take on Jane Mason’s Natural Starter made with Wheat Flour.)

shaping: Rather than turning the dough into focaccia, the BBB recipe called for it to be shaped into a loaf. Of course this would work. But I think if we did turn it into a loaf, we would fold the rosemary into the dough at the same time as the raisins. Please see Judy’s recipe (link below) for instructions on how to shape and bake it.

– Lisa Rayner, Wild Bread: Hand-baked Sourdough Artisan Breads in Your Own Kitchen, Dough Basics, p. 69
Food professionals agree that “artisan” salt, with its aromatic flavorings, tastes exactly like non-iodized table salt in cooked foods. Neither of us is able to distinguish among salt types in baked breads.

– Jeff Hertzberg and Zoë François, Artisan Breads in Five Minutes a Day, chapter 1: Ingredients
[S]tick with table salt for uses like baking and soups where the flavor and texture will be lost, but for use at the table, skip the cheap stuff. Go with sea salt to get a big flavor boost and add some home-harvested interest, too. 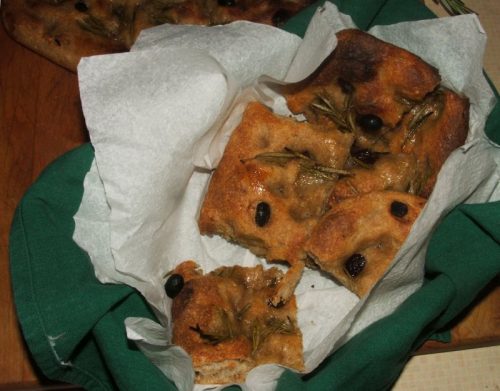 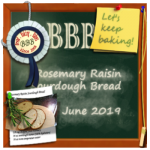 Judy is the host of June 2019’s Bread Baking Babes’ project. She wrote:

This is one of my most favorite breads ever. When I was in culinary school, we played around with adapting bread recipes for starter, and this recipe was the results of our efforts. It always performs! (Famous last words.) This is also the only baked good containing raisins that I will eat. The golden raisins add a nice touch of sweetness.

One summer, I entered it into the County Fair, and it won a second-place ribbon for sourdough breads. It was featured in an article in the local newspaper, complete with story, recipe, and photos.

Please feel free to change it up, if you wish: different fruit or herb or sweetener. I look forward to seeing what you all do.

– Judy, in message to BBBabes

We know you’ll want to make rosemary raisin sourdough bread too! To receive a Baking Buddy Badge to display on your site: make the bread in the next couple of weeks and post about it (we love to see how your bread turns out AND hear what you think about it – what you didn’t like and/or what you liked) before the 29 June 2019. If you do not have a blog, no problem; you can also post your picture(s) to Flickr (or any other photo sharing site) and record your thoughts about the bread there. Please remember to email the Kitchen of the Month to say that your post is up.

Please take a look at the other BBBabes’ June 2019 bread. 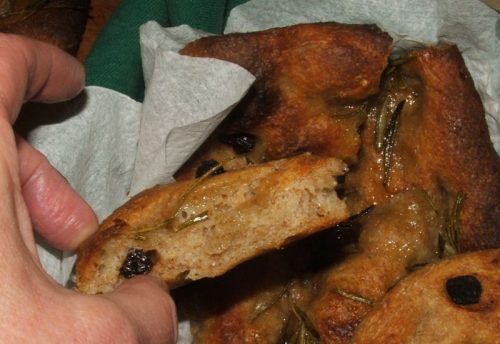 As I type this, it’s quite cool again – it’s just 17C in the middle of the day! It’s a little hard to believe that the first day of summer is just around the corner!