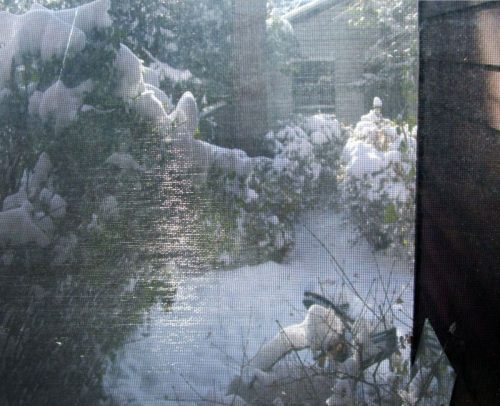 Oh my ears and whiskers, how late it’s getting!

I was determined not to be late (yet again). I really was. And it came awfully close.

I blame the far too early snow fall.

Back when we could still easily ride our bikes and I was just beginning to think I should probably turn off the outside water and haul the non-hardy plants into the basement (nick o’ time on that), I was really happy when Cathy announced that we would be baking a savoury bread this month! But then, as I looked at the ingredients for the filling, I started to pause.

And it suddenly dawned on me. Raisins are savoury, aren’t they? 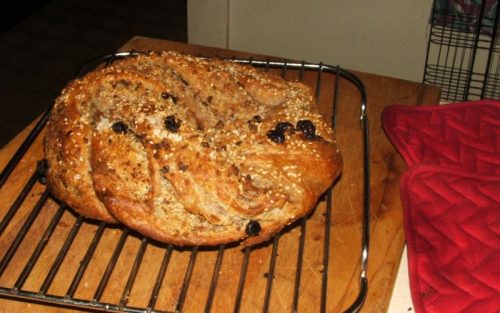 2 October 2019, 14:13 I have to say that Cathy’s Danish Crown looks really fabulous! Even though the dough contains eggs

…. The crown seems like it would be an ideal WOW factor addition for US Thanksgiving tables.

I particularly like the look of the sunflower seeds!

6 November 2019, 15:55 We raked leaves yesterday; there was a frost warning for last night and a warning of possible snow for today (mercifully no snow yet); and I suddenly realized that it is only 10 days until the 16th!

I’m thinking that if I am smart, I should probably make the Danish Crown this weekend.

You all already know I am a freak – I love using our digital scale for everything… with the help of Gourmet Sleuth, I calculated the alterations of ingredients that didn’t get translated from volume measures:

waaaahhhhhhhhhhh! Best laid plans and all that. Once again, I have not paid proper attention to my calendar (I blame the premature massive snowfall – it looks pretty, but it has really made a mess of the roads). I think I might be able to make the bread on Friday but I’m not sure that I’ll manage a write-up until Monday.

14 November 2019, 23:15 Maybe I can be on time after all! I just mixed the starter and made an executive decision to double the amounts of flour and water for the leavener. Because I know that works….

Just after I left the kitchen, I raced back in because I suddenly remembered what I had read recently. (If it is published in a book, it MUST be true.)

[I]t is important to note that dough volume will be enhanced only by solid fats, not by liquid oils. The latter have a slightly depressing effect on volume. […] [F]ats that are hard at room temperature, such as butter and lard […] have the advantage of giving extra volume to bread, something that neither liquid oils nor semi-hard ‘spreads’ do. […] [A]n addition of about 5g fat per kilo of flour will give maximum loaf volume, with rather more needed for wholemeal breads.
[…]
If you are using a solid fat, such as butter or lard, there is no need to rub it in but it will disperse into the dough better if it has not come straight from the fridge. – Andrew Whitley, ‘Mixing’, Bread Matters: The sorry state of modern bread and a definitive guide to baking your own, Chapter 4: The essential ingredients and Chapter 5: Starting from scratch

My excuse? I don’t really have one. Although, I can hear Julia Child’s voice echoing in my head saying something like “Ye Gods! You are the boss of that dough. Mix it on YOUR schedule”. As if I actually have a bread-making schedule.

Even though the butter was in the oven with the light turned on, the kitchen is cold enough now (why oh why has winter arrived so early this year?) that the butter was just barely soft-ish. Even though Whitley says it’s unnecessary to rub the butter in first, I felt compelled to use our pastry cutter to get it sort of uniformly into the flour mixture.

But the coolest thing about the mixing process was seeing that ground flaxseed really does gelatinize!

12:13 I just squooshed in the salt. Ummm, I sure hope I haven’t added too much whole wheat flour to the dough. It looks pretty brown.

Shriek!!! This is a laminated dough?! Is THAT what the “butter, divided” was all about? (And here I was so sure that I had read through the recipe from start to finish.)

I cannot believe that I didn’t manage to comprehend everything in the instructions. (I’m suddenly reminded of my sister’s dislike of any recipe that says “Meanwhile”.)

So. I just slivered butter directly out of the fridge and rolled out the dough into several layers, laying down bits of butter and folding the dough in half over the butter.

I’m now about to make the filling. And I’m determined to bake the ring tonight. Because if I put it in the fridge overnight, I feel certain it will over-rise and we’ll end up with a door stop of a ring. (Nobody wants to see or hear either of us when we take a just-baked doorstop out of the oven….)

In my determination to transgress massively, I’ve also decided not to include onions. It’s just going to be almonds, bread crumbs, salt, and pepper. And maybe a little more butter.

Just as I was about to roll the dough in jelly roll fashion (feeling ever so slightly guilty about purposely omitting the onions and cheese), I thought: raisins. Yes! Raisins will be the perfect addition. J’adore raisin bread!

Doing the rest of the shaping was a breeze. I hardly lost any of the filling on the board as I transferred the ring to the parchment covered pizza tray. I liberally sprayed the shaped ring with water, scattered on some sesame seeds, put an overturned stainless steel mixing bowl overtop, and stuck the tray into the oven with only the light turned on. 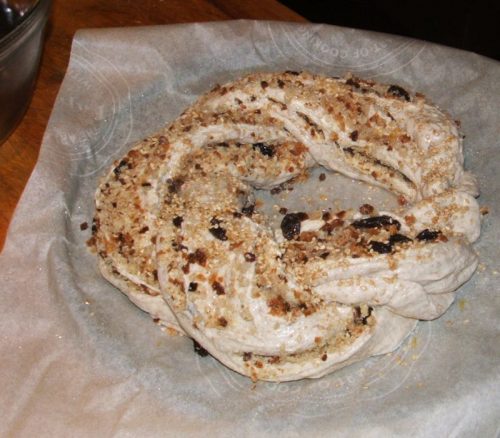 I suddenly remembered I was supposed to put in salt and pepper!

How handy that, over the years, we have been given various containers of finishing salts. I whisked the tray out of the oven, scattered some Camargue fleur-de-sel on top of the ring, re-covered it, and thrust it back into the oven.

We’re planning to bake the ring after dinner. It should work. 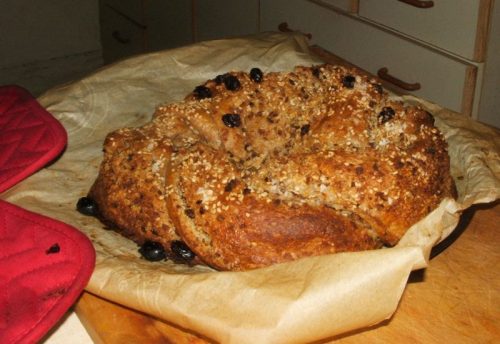 We cut into the bread this morning…. 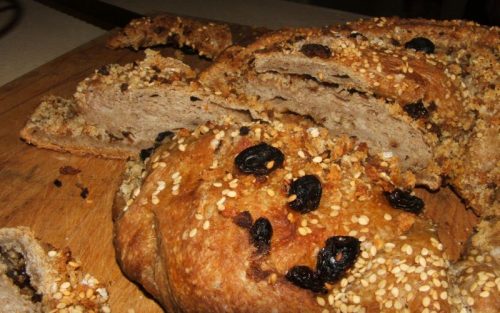 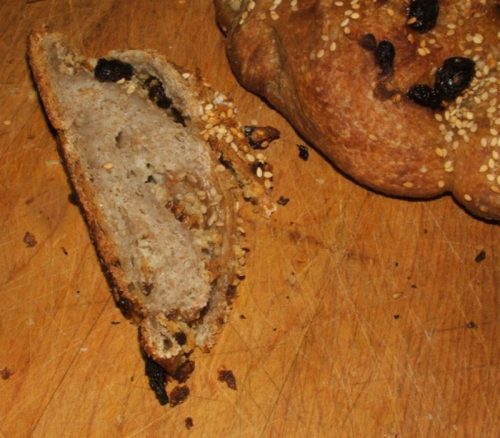 This bread should have been great. Too bad it’s not done internally! (Would using a thermometer have made a difference? Would it have told me that the insides weren’t baked yet?)

We toasted the slices as best we could, and drizzled them with honey. Hmmm, not bad….

But I have to be honest. I think this bread is just a little too whole-grainy for our taste. Although, it could be that the reason we think it is too whole-grainy is because it wasn’t completely baked through.

If only I had managed to follow all the directions, this would have been great bread!

Thank you for choosing Savory Sourdough Danish Crown, Cathy! Next time I make it, I’ll make sure it’s baked through; I know this recipe will be a keeper.

Here is the BBB recipe for Savory Sourdough Danish Crown that we were given. And here is what I did to it:

Savoury Danish Crown
adapted from a recipe in “BREAD: the breads of the world and how to bake them at home” by Christine Ingram and Jennie Shapter

Serve the bread warm or at room temperature. It’s delicious for breakfast with honey (and more butter if you like) and giant cups of coffee.

Leavener: The leavener was made with a 100% hydration whole wheat starter. It takes about 5 days to create. It resides in the fridge after that – our starter has been happily bubbling away and raising fabulous bread since July 2017. (Please see our take on Jane Mason’s Natural Starter made with Wheat Flour.)

Wheatgerm: I’m re-reading Andrew Whitley’s book, “Bread Matters: The sorry state of modern bread and a definitive guide to baking your own” and am once again horrified by what we are allowing the millers and manufacturers of our flour to do. I felt even more compelled that ever to add wheatgerm to the BBB recipe….

Before the invention of roller milling, all flour was produced by crushing wheat between revolving stones. All parts of the wheat — bran, germ and starchy endosperm — were pulverised and mixed together […] The roller-milling system, deployed from 1870 onwards, was quite different. It passed the wheat between pairs of steel cylinders, which gradually stripped the layers off the grain, sifting the material thus produced into a series of streams, each containing a different fraction of the flour. […] [T]he reduction in the roller-milled flour of several important nutrients […] Removing the germ, which contains virtually all the valuable vitamin E of the wheat, was a nutritional disaster
[…]
[A]lmost all the ‘whole’ wheat flour produced today is from roller mills. In other words, it is reassembled from the separated fractions of flour but without the crucial wheat germ oil, on the grounds that replacing it would shorten the flour’s shelf life. Perhaps such flour should be labelled ‘reconstituted semi-whole wheat flour’ to alert consumers to the fact that it does not contain all the elements of the original grain.

Butter: Before realizing that the dough was to be a laminated one, I planned to use only 4 tablespoons of butter in the dough. But when it finally dawned on me that there was a reason for the word “divided” beside “butter” in the BBB recipe, I added another 4 tablespoons – still less than the original recipe. It was plenty!

The recipe called for 3/4 cup of butter – 1 1/2 sticks. I ended up using 1 stick and 3 tablespoons, but I’m not sure it needs that much butter. I think you could get away with less, but I’ll leave that up to your discretion.
– Cathy, message to BBBabes

If only it had been baked through, we would have LOVED this ring. It’s a terrific way to use up old bread! 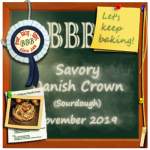 Cathy is the host of November 2019’s Bread Baking Babes’ project. She wrote:

The November Bread is a Sourdough or Wild Savory Danish Crown. It reminds me of a big croissant filled with onions.

– Cathy, in message to BBBabes

Ha. Perhaps I should try making it with onions….

We know you’ll want to make a Sourdough Savory Danish Crown too! To receive a Baking Buddy Badge to display on your site: make the bread in the next couple of weeks and post about it (we love to see how your bread turns out AND hear what you think about it – what you didn’t like and/or what you liked) before the 29 August 2019. If you do not have a blog, no problem; you can also post your picture(s) to Flickr (or any other photo sharing site) and record your thoughts about the bread there. Please remember to email the Kitchen of the Month to say that your post is up.

Please take a look at the other BBBabes’ November 2019 Danish Crowns: 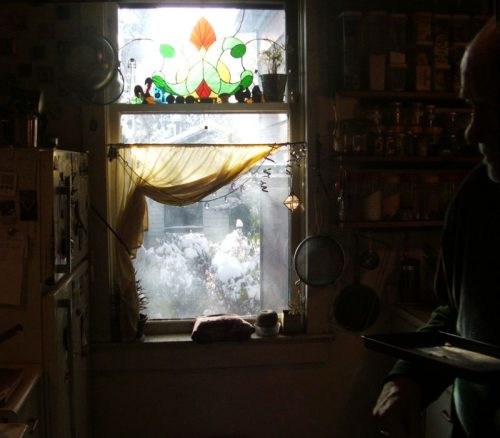