Maybe one day, I’ll master scoring.
– me, blog from OUR kitchen | Adventures in Scoring (BBB August 2020) 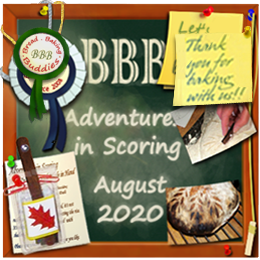 Since posting about the BBBabes’ August 2020 project, when not distracted by making pebble bread or naan on the barbecue, I’ve tried a couple more times to improve my scoring skills.

I imagined that my earlier failures were due to baking the bread in the barbecue. But even baking Tartine Bread in the combo-cooker in the oven didn’t really improve anything. It is only with squinting and putting the bread in exactly the right light that the pattern was even remotely visible. The most recent endeavour was such a disaster that I didn’t bother getting the camera out. (The bread was good though….) 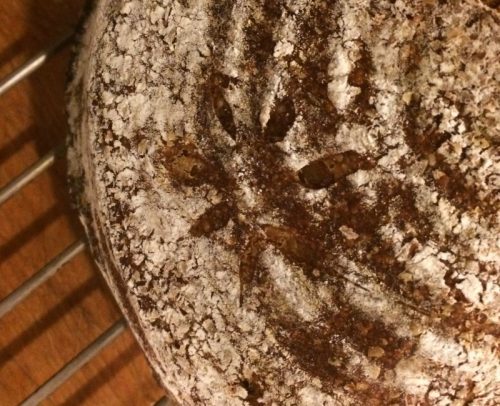 Clearly, I have a LONG way to go.

Read on to see that others, however, are well on their way.

I had fun drawing my pattern for a round slack dough to be baked on the pizza stone on the barbecue. Executing the pattern on the bread seemed very easy. The blade went right through like butter! We baked the bread on the stone in the barbecue. But oh dear. […] Waaahhhh. Back to the drawing board for me. – me, (blog from OUR kitchen)
What little faith I had … scoring is intimidating. I’ve rarely gotten what I felt was good scoring. […] I put the lame to it and in short order … I mean really short order without planning what would work or happen, I was putting two slashed loaves in the oven. BAM. Twenty minutes into the bake I checked to rotate the loaves and was totally shocked to find amazing oven spring! Wow. And what is this, actual and something of reasonable scoring patterns. Maybe not what would be termed practiced or professional but for a first try, more than acceptable. DONE.– Tanna (My Kitchen in Half Cups)
It’s not as difficult as it looks, but perhaps more difficult than you might think. For my next attempt I will do more planning on the pattern, and change the handle on my lame. That, or just hold the blade with my fingers. […] I did use a piece of string to mark out quadrants on my loaf, but was still freestyling a little with my slashing and lost my place once and put a slash in the wrong place. You can’t undo that. Oops. […] My loaf did considering singing for me this bake! Well, it kind of hummed for a while, it was a little shy, but the crackles were there. – Kelly (A Messy Kitchen)
I baked a yeasted loaf using some pumpkin puree in it, which made the interior a lovely golden color. […] I used a linen cloth with both bread and rice flour for the rising and put some rice flour on the top of the loaf, too, to help show the pattern, but all the flour browned to about the same color as the crust of the loaf, so that didn’t work out so well. The scoring that was deeper allowed the interior gold to show. Next time I’ll score deeper if I make this bread. – Pat, aka Elle (Feeding My Enthusiasms)
Apparently, I have a fear of scoring, although it’s not what you think. In this particular case, I cringe when I have to put razor blade to rising dough, fearful that I will deflate the perfect loaf. […] I practiced on four different loaves of bread, experimenting with depth of cuts and design. […] Round 2: This loaf helpfully formed its own pedestal/stand. […] This was a good challenge that helped to reduce my fears of slashing and scoring. I still have more practicing to do, however. – Judy (Judy’s Gross Eats)
This is my first attempt and decorative bread scoring with a high hydration dough. Now that I’ve given it a try, I can’t wait to try again and improve my technique. – Karen K (Karen’s Kitchen Stories)
Elizabeth set this month’s challenge which is less about the bread and more about slashing or scoring the dough. […] The recipe was ours to choose so long as it was made with slack dough (at least 75% hydration). We also had to score it decoratively. So I’m calling this post Baker’s Percentage and Scoring Adventures. – Aparna (My Diverse Kitchen)
Have you ever looked longingly at those exquisitely scored breads that show up in your Facebook, Instagram, and Pinterest feeds and thought I could never do that? Me too. […] Apparently, old habits are hard to break as they say, so I had a hard time trying not to create an ear or directing the rise. I suppose that’s not a bad thing… – Cathy (Bread Experience)
It wasn’t a baking challenge. It was a slashing challenge. Everyone got to make their own recipe for the bread and then practice using a sharp instrument to make pretty patterns. […] If it ever cools down enough here to turn the oven on I may try this. – Katie (Thyme For Cooking)

I do understand that in these waning days of actually replying to blog posts, I shouldn’t be even vaguely surprised to have received zero messages about BBBuddies’ Scoring Adventures. But two people did post about their Scoring on FB. I asked permission to display their photos….

Here are the Scoring Adventures that were posted about in Facebook: 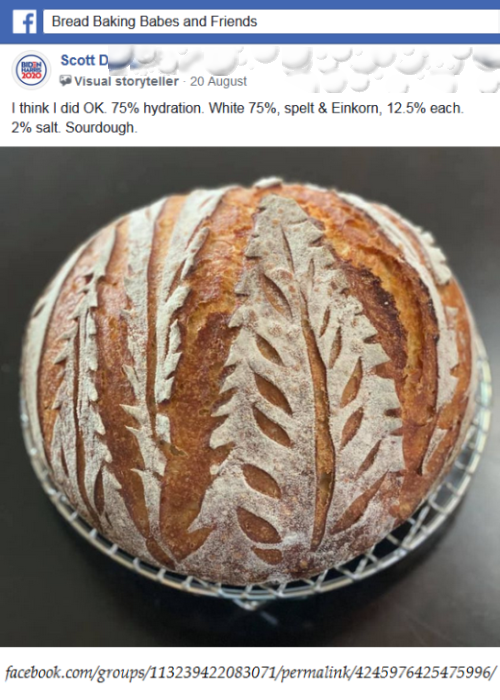 Interestingly, just short of a month before we revealed the BBBabes’ August 2020 project, Scott posted a photo of his beautifully scored bread, saying “This turned out so pretty I have to share“, adding that he “swap[ped] out 100g of white and put in 50g each Einkorn and Spelt. Sometimes I swap out an additional 25g and add whole wheat” from the Sourdough Bread Masterclass With Patrick Ryan recipe on ILoveCooking.

Then, on 20 August 2020, he posted the photo displayed here, saying I think I did OK. 75% hydration. White 75%, spelt & Einkorn, 12.5% each. 2% salt. He also added that he had used a small round lame, cold dough fresh from overnight proof, dust liberally with white rice flour and rub it around with your hand to make an even layer and pointed to Jessika’s GoodKneads’ posts on Instagram. Do take a look. Many of the patterns are exquisite!

As exquisite as this pattern on Scott’s loaf…. 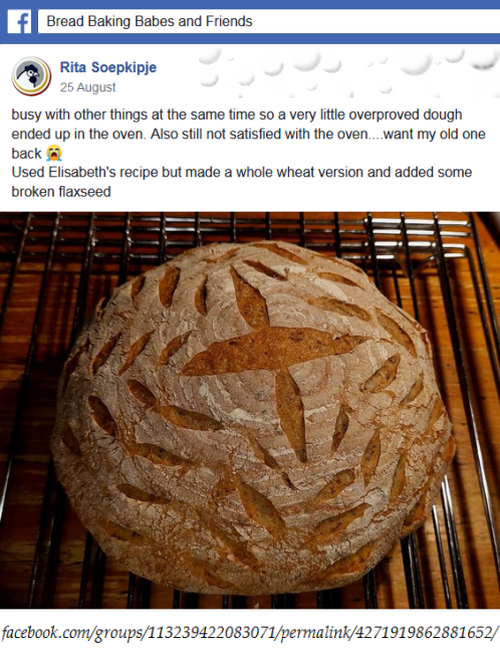 On 25 August, Rita (Soepkipje) posted this lovely photo saying,
busy with other things at the same time so a very little overproved dough ended up in the oven. Also still not satisfied with the oven….want my old one back 😭
Used Elisabeth’s recipe but made a whole wheat version and added some broken flaxseed How fabulous is that?! I wish that my loaves, using the exact same recipe had turned out as well!

You really are the BBBest!!

If I missed posting about anyone’s BBB August 2020 Scoring Adventures, please do let me know.

Of course, if you haven’t had your scoring adventures yet, just because the deadline is past, I hope that won’t stop you from trying it out. Because it’s thrilling! …especially when it works.

Thank you to all who so willingly embraced the challenge to play with sharp objects. 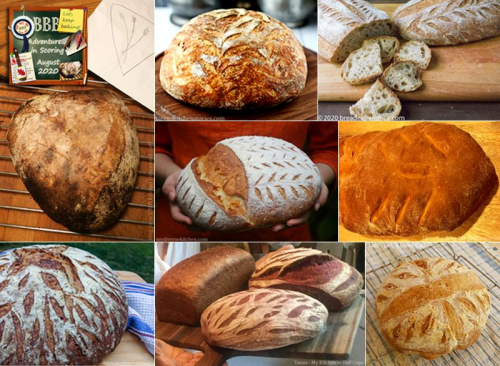